A motorcycle trooper with the Colorado State Patrol and a local tow operator escaped with minor injuries after a pickup truck crashed into both their vehicles on scene of a previous crash.  The driver and passenger of the pickup were not so lucky. 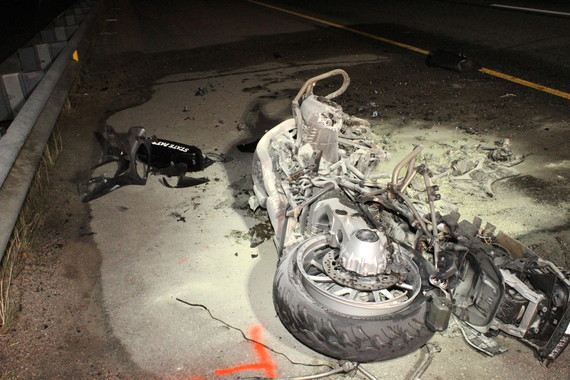 Colorado State Patrol motorcycle which was destroyed in a crash June 22, 2022. Courtesy CSP

At approximately 1:34 a.m. Wednesday on southbound Interstate 25 near mile marker 157 near Colorado Springs, Trooper Dean McClain was finishing the on-scene investigation of a single vehicle crash resulting in injuries that had been reported at 11:37 p.m. Tuesday.  His 2020 BMW Patrol motorcycle was parked on the right shoulder with its emergency lights activated.  Directly in front of the motorcycle was a 2017 Freightliner tow truck, with its amber lights activated, loading the vehicle from the first crash.  A southbound 1998 Ford pickup traveled from the left lane, across the middle and right lanes, and onto the shoulder, colliding with both the motorcycle and the tow truck.  The motorcycle was thrown across all lanes of traffic into the center median, where it caught fire and was destroyed. 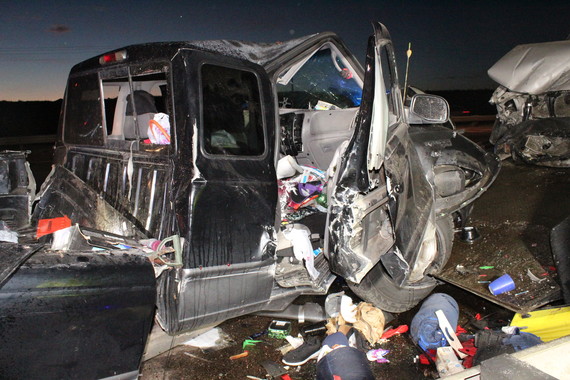 At the time of the impacts Trooper McClain was standing on the west side of the guardrail.  The tow operator, a 31-year-old male from Colorado Springs, was standing between the tow truck and the guardrail.  Debris from the impacts struck both Trooper McClain and the tow operator, causing minor injuries.  The driver of the Ford pickup, Bernard Ewertz, 55 of Greeley CO, sustained moderate injuries.  His passenger, a 31-year-old female from Greeley CO, sustained serious injuries.  Both were transported to Penrose Hospital.  Neither the trooper nor tow operator were transported.  Mr. Ewertz was later arrested for driving under the influence.  Two lanes of I-25 were closed for approximately four hours while the on-scene investigation took place.

"Today, we were extremely lucky this situation was not worse," said Colonel Matthew Packard, Chief of the Colorado State Patrol.  "We have not always been this lucky.  This is a dramatic reminder of the dangers of both not moving over, and driving under the influence."