EarthTalk – Why are lawsuits being filed over Factory Butte in Utah?

What is the controversy over the Factory Butte landmark in Utah that has environmental groups filing lawsuits?

The kerfuffle over Factory Butte, a 6,300-foot peak in Wayne County, Utah about 25 miles east of Capitol Reef National Park, stems from the on-again, off-again nature of federal rules about whether Off-Road Vehicles (ORVs) should be allowed to roam the 5,400 acres of wild desert surrounding it.

Named by white settlers in the mid-19th century who thought its almost-architectural stature resembled a Provo, Utah woolen mill, Factory Butte is the latest flashpoint in a long timeline of disputes over what constitutes fair and proper use of federally managed desert wildlands in Utah and across the Southwest. 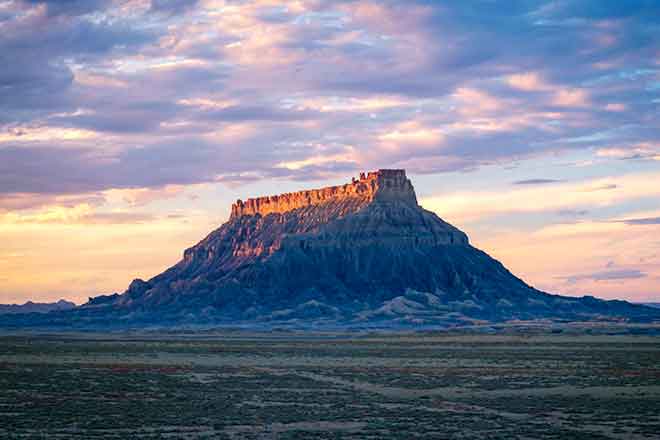 Environmentalists would like to see the 5,400 acres of desert wildlands surrounding iconic Factory Butte in central Utah permanently protected from off-road vehicles and mechanized transport of any kind. Credit: David Kingham, FlickrCC

Grand Staircase-Escalante and Bear's Ears have been in the news lately given efforts by the Trump administration to ease restrictions on development, but Factory Butte has remained out of the spotlight since a George W. Bush-era ruling to close it to ORVs given potential risks to fragile desert soils and endangered species. But in May 2019, after some 12 years of protection, Trump's Bureau of Land Management (BLM) opened up the desert around Factory Butte to ORVs once again despite protests.

"The agency's decision ensures that one of Utah's most recognizable landscapes will be defaced and damaged for years to come," reports the Southern Utah Wilderness Alliance (SUWA), a Salt Lake City-based conservation group leading the fight to keep ORVs out of fragile desert wildlands. "Contrary to popular myth, these tracks don't simply disappear after the next rain!"

"Faced with public pressure and well-documented damage to the natural resource values of the areas around Factory Butte, the BLM disallowed ORV use in the area in 2006," reports the Natural Resources Defense Council (NRDC), a leading environmental non-profit working with SUWA in suing the BLM over the move in hopes of getting it overturned. "BLM indicated in its environmental impact analysis that the area around Factory Butte should remain permanently closed to unrestricted cross-country travel."

This violation of NEPA is a central tenet of the lawsuit the two non-profits are jointly filing against the Trump administration for opening up the area to ORVs once again. "Unrestricted ORV use in this area is simply incompatible with its fragility. Those who hope to appreciate its awe-inspiring beauty would instead confront a vast web of tire ruts carved into the desert," adds NRDC. "And the area faces a potential loss of its highly vulnerable desert species. We hope our lawsuit once again demonstrates these facts and brings renewed protection of this iconic western landscape."