Eboni Nash, a graduate of Eads High School, was honored at Hastings College in Hastings, Nebraska, Tuesday with the school's 2019 Bronco Award. She is the daughter of Teresa Witte of Eads.

Nash was one of three students to receiving the award at the college's day-long "Celebration of Excellence" held April 30. Geena Piper of Norfolk, Nebraska, and Carly Spotts-Falzone of Wayzata, Minnesota, were also named as recipients.

Nash has been a Dean's List honor student, and is majoring in psychology, religion and sociology. She has participated on the indoor and outdoor track teams and has been a member of Omicron Delta Kappa. She has also led the Food4Thought backpack program. 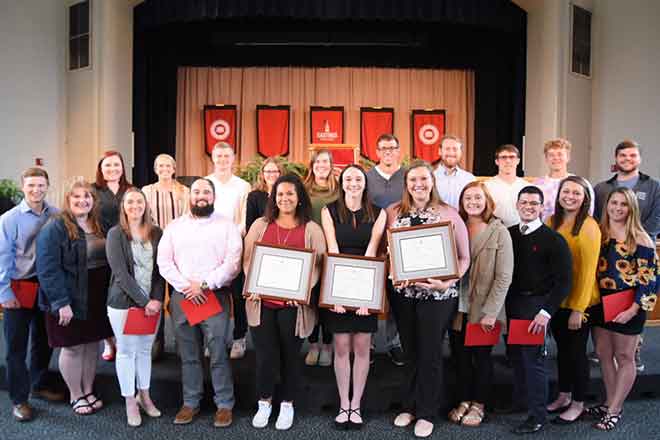 Students honored at the April 30, 2019, "Celebration of Excellence" day at Hastings College. Included is former Eads High School student Eboni Nash (front row, fifth from left), who was one of three recipients of the 2019 Bronco Award.

The Bronco Award is Hastings College's highest non-academic award granted to students. It was established in 1924. Award recipients are decided by a vote of their peers, along with a student-faculty committee.