Portions of far eastern Colorado will be under a red flag warning for high fire danger Saturday according to the National Weather Service.

With temperatures in the upper 80s to low 90s, along with breezy conditions as an upper level disturbance moves across the Rockies, the risk for fire will be greatest during the afternoon. The warning will be in effect from noon to 7:00 p.m. The worst conditions are expected for Kiowa, Bent and Prowers counties, while Cheyenne, Kit Carson and Yuma counties are also in the warned area. 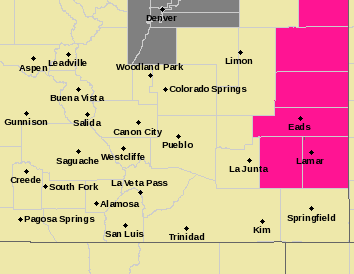 Winds out of the south are expected to gust up to 40 miles per hour, while relative humidity falls into the low teens.

A few showers and thunderstorm are also possible during the afternoon across higher elevations, though rainfall amounts will be limited.

A red flag warning means that critical fire weather conditions are either occurring now, or are imminent, according to the National Weather Service. A combination of strong winds, low relative humidity, and warm temperatures can contribute to extreme fire behavior. Outdoor burning and other activities that could spark a fire are discouraged.