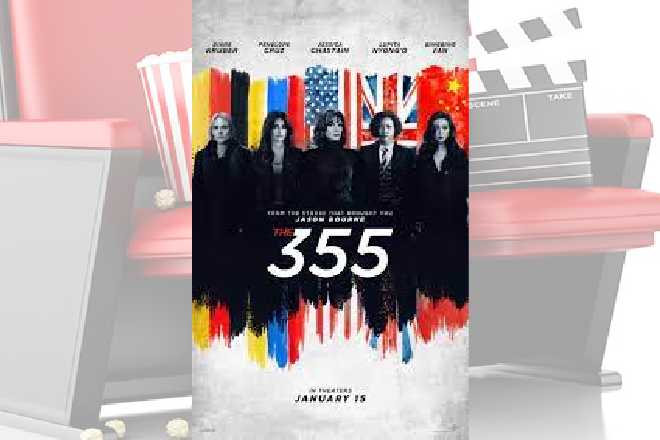 For some reason, "The 355" really wanted to be the first movie of the year - any year. It was originally scheduled to open in January 2021, but I guess the studio decided that since theaters in major markets weren't open yet, it should be pushed back to January 2022. Things might have worked out better in 2021. Yes, it would have faced obvious hurdles with a limited number of theaters, but competition in that era was scarce. It wouldn't have gotten steamrolled by "Spider-Man: No Way Home" and "Sing 2" like it did this past weekend when it opened to less than $5 million at the domestic box office. Then again, it might not have made a difference. Audiences know a bomb when they see one, no matter when it opens.

The actresses play spies (Cruz plays a psychologist who works for a spy agency but isn't a spy herself, as her wet-blanket character constantly reminds us) that are all trying to keep an evil flash drive from falling into the wrong hands. The "wrong hands" means the bad guys, obviously, but it also means each other's agencies, meaning that they're at odds with one another. Eventually they learn to work together and rightfully decide that their own corrupt agencies shouldn't have it either.

Their mission takes them all over the world as they track the MacGuffin from one boring bald guy to another. We wait for it to wind up in the hands of a cast member worth crediting. It starts off with a corrupt DNI agent (Edgar Ramirez), but he's got "killed off quickly" written all over him. We also know that arms dealer Clarke (Jason Flemyng) is in the mix, but he's too boring (even for this movie) to truly be at the top. Could it possibly be Chastain's partner (Sebastian Stan), who was presumably killed in the first act, but whose death we didn't see so he's surely still out there somewhere?

The characters and story certainly aren't enough to carry this movie, how's the action? Choppy and underwhelming. The actresses usually wear wigs for their missions, which is just a thinly-veiled excuse to hide stunt doubles under those wigs. But the stunt doubles aren't being directed particularly well, so there's little point. The fight scenes offer nothing unique and there are so many shootouts that you'll be bored with shooting by the end of this movie. A movie with this high of a body count from shooting really has no business going for a PG-13 rating, but it's intentionally just bloodless enough to qualify.

Although the film's advertising has given away why the movie is called "The 355," we don't get the scene where it's explained until the very end (which is another dead giveaway that the Stan character is still alive). This means that the group plans to continue working together, and thus a sequel is implied. I dare someone to give us a sequel after how bad this movie is and how badly it has performed. At least whoever is put in charge won't have to worry about high expectations.

"The 355" is rated PG-13 for sequences of strong violence, brief strong language, and suggestive material. Its running time is 124 minutes.