In preparation for "Bad Boys for Life," I watched the previous two "Bad Boys" films from 1995 and 2003. This research coincided with the "Jeopardy!" Greatest of All Time tournament, which featured especially hard clues designed to challenge the brainiac players. It was an interesting balance of opposite ends of the IQ spectrum. When "Jeopardy!" had my brain short-circuiting, I turned on "Bad Boys" to cool it down. When "Bad Boys" had my brain flatlining, I turned on "Jeopardy!" to bring it back to life. By the end of the week two things were clear: that I should never get within 500 feet of the "Jeopardy!" set, and that the "Bad Boys" franchise was just as explosive and dumb as I expected from pre-"Transformers" Michael Bay. The new film isn't directed by Bay, but new helmers Adil El Arbi and Bilall Fallah are clearly following his blueprint very closely, for better or worse. 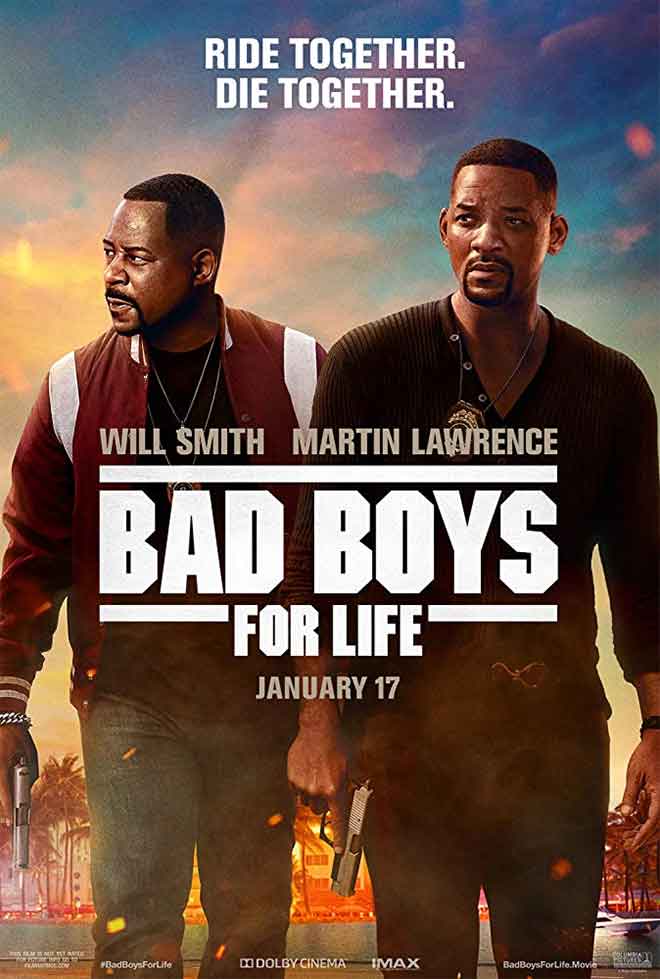 Will Smith and Martin Lawrence are back as Miami detectives Mike Lowery and Marcus Burnett, respectively. Mike wants to keep chasing bad guys for all eternity, while Marcus wants to retire to spend time with his family, which now includes a grandchild. And of course their captain (Joe Pantoliano) just wants them both to stop giving him ulcers. Imprisoned cartel queen Isabel (Kate del Castillo) and her son Armando (Jacob Scipio) have plans to see that these people don't get what they want. During Isabel's inevitable escape, she comes across an overturned fruit cart. Doesn't this movie know that it's supposed to show the senseless destruction of the fruit cart during a chase scene?

An assassination attempt on Mike leaves him unable to pursue Isabel and Armando himself. But he can consult with an upstart unit led by potential love interest Rita (Paola Nunez). Mike clashes with the younger officers in the unit (Charles Melton, Vanessa Hudgens, and Alexander Ludwig), who mean well but aren't proactive (i.e. ready to go into a situation with guns a-blazing) like him. What he really needs is Marcus back, but his old partner has committed himself to non-violence. This obstacle lasts for about a scene and a half before Mike has Marcus do some mental gymnastics to make him reckless and deadly again.

The Mike/Marcus relationship is given a moderate amount of attention, though thankfully not so much that Martin Lawrence is allowed to really annoy me like in the first movie. The relationship between Mike and Rita and her team is given minimal attention, mostly limited to arguments over the team's "observe, don't get involved" position (Vanessa Hudgens is not in the movie nearly enough to justify her third-from-the-top billing). There's a lot of development given toward the relationship between Mike and the villains at the end. The storyline culminates in a tease for another sequel, which makes me wonder if the studio's marketing team regrets calling the third movie "Bad Boys for Life" when saving the title for the fourth movie and calling it "Bad Boys 4 Life" makes much more sense.

Your opinion of "Bad Boys for Life" will depend heavily on how you feel about movies that pride themselves on being dumb, but fun. Here's a test: there's a scene where the characters go into a showdown at a Mexican church filled with stained glass windows. Are you rubbing your hands in anticipation of all the glass breaking? If so, this is the movie for you. If not, you probably won't like the glass breaking or all the shooting and explosions that take place long after the movie has run out of glass to break. I'm of the opinion that the action should last only as long as there's glass to break.

"Bad Boys for Life" is rated R for strong bloody violence, language throughout, sexual references and brief drug use. Its running time is 123 minutes.