Movie Review - A Beautiful Day in the Neighborhood 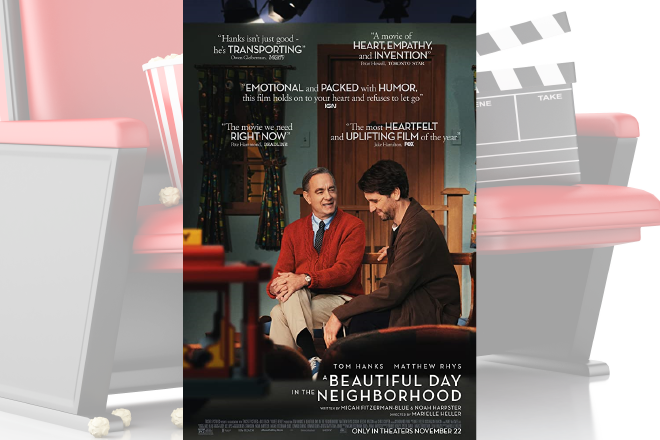 NOTE: I am reviewing this film because it has the highest domestic box office ($61 million) of any film in my cable provider's "New and Featured" On Demand section that I have not yet reviewed.

"A Beautiful Day in the Neighborhood" tells the story of reporter Lloyd Vogel (Matthew Rhys), who is encouraged to reconcile with his estranged father Jerry (Chris Cooper) by interview subject and children's TV legend Fred Rogers (Tom Hanks). Despite Hanks-as-Rogers being the focal point of the film's advertising and award campaigning, and the fact that the film's very title is a "Mister Rogers' Neighborhood" reference, this is not a full-on Fred Rogers movie. The 2018 documentary "Won't You Be My Neighbor?" is a full-on Rogers movie, and seeing that superior film so close to this film's release made me even more aware of the newer film's shortcomings.

Vogel is a cynical individual who holds a grudge against his father for disappearing from his life when his mother was dying. To distract him from his tumultuous personal life, his editor assigns him to do a fluff piece on "living saint" Rogers. Vogel thinks the assignment is beneath him, save for the possibility that he can expose Rogers as a phony unworthy of his pedestal. He meets Rogers, who takes an interest in him and his family and hardly wants to talk about himself. It's as if he's just as caring as his reputation, but that can't possibly be the case, can it?

Vogel and Rogers meet more and more, and Rogers inserts himself further and further into the situation with Vogel and his father. Soon he's calling up members of Vogel's family without his knowledge and possibly showing up in New York when he's supposed to be in Pittsburgh. The film almost becomes a stalker movie at one point, which is certainly a bold way to depict Mister Rogers. If he were a character on his show, he wouldn't be himself so much as notoriously intrusive mailman Mr. McFeely. Eventually, of course, Vogel learns to accept the helping hand Rogers is offering him and recognizes that he is about as incorruptible as they come.

We're all here for the Hanks performance, as it seems almost too perfect that the quintessential likeable actor is playing the quintessential likeable human being. And I'm sorry, but Hanks only ever captures about 98% of Rogers' sincerity to me. If I had grown up with this version of Rogers, I would be questioning his authenticity just as much as Vogel does. For this performance, Hanks slows down his voice to a level that passes Rogers' real cadence and comes off as a leftover Forrest Gump bit. There's undeniably heart in the performance, but I was always aware that it was a performance.

But the biggest problem with "A Beautiful Day in the Neighborhood" is all the focus on the non-Rogers Vogel storyline. It's not that Vogel's journey to forgiveness is a "bad" or uncompelling one, but this movie knows perfectly well that it sold me on Mister Rogers and it needs to focus on delivering Mister Rogers. I suppose it could be argued that this movie makes it clear that Fred was a humble guy who wouldn't want to hog the spotlight, not even in his own biopic. To that I say that he put himself front and center on a show with his name in the title, so obviously he had a perfectly understandable craving for the kind of attention this movie should have given him.

"A Beautiful Day in the Neighborhood" is available On Demand through online streaming or likely through your local cable provider. The film is rated PG for some strong thematic material, a brief fight, and some mild language. Its running time is 109 minutes.