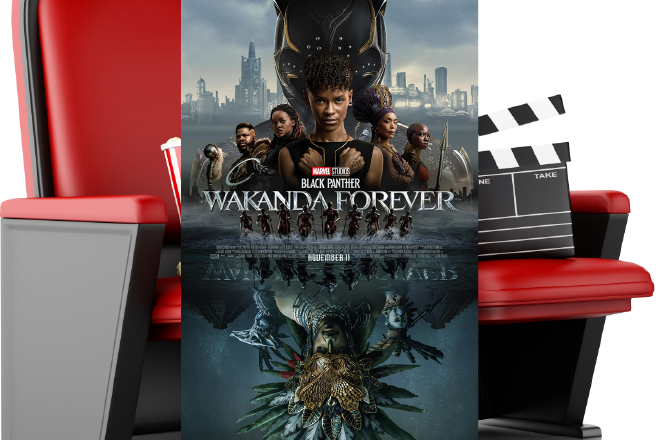 In 2018, "Black Panther" became the biggest hit of the Marvel Cinematic Universe. It even made more at the domestic box office than that year's "Avengers: Infinity War." Since then, King T'challa (Chadwick Boseman) of the African kingdom of Wakanda died at the hand of Thanos, came back in "Avengers: Endgame," and then died permanently of an unspecified illness. This of course mirrors Boseman's real-life death in 2020. The opening of "Black Panther: Wakanda Forever" is dedicated to T'challa (and Boseman's) passing and the celebration of his life. Yes, the Marvel logo is Boseman-centric, but it opts for a quiet, reverent tone rather than the call to cheer that was Stan Lee's tribute at the beginning of "Captain Marvel" in 2019. Nothing wrong with either approach, they're just respectful in different ways. This portion of the film is handled perfectly. The rest of the film is... less perfect.

A year after T'challa's passing, Wakanda is still thriving thanks to the strong leadership of his mother Ramonda (Angela Bassett). A sequence where she makes a stern speech at the United Nations with the help of military leader Okoye (Danai Gurira) is the best post-T'challa scene in the movie and is even garnering Bassett some Oscar talk. There's still some unease because Wakanda no longer has sovereign hero Black Panther around to protect it. Ramonda would like her daughter Princess Shuri (Letitia Wright) to pick up where T'challa left off, but Shuri wants only to bury herself in scientific research so Wakanda can survive without an antiquated superhero.

Danger rears its head in the form of Namor (Tenoch Huerta), ruler of the undersea kingdom of Talokan. Talokan is the only other place on Earth with access to vibranium, the element that allows Wakanda to be so technologically-advanced. Namor orders Ramonda and Shuri to assassinate Rari Williams (Dominique Thorne), a teenage scientist with the ability to expose Talokan's existence to the world. Failure to do so will lead to Talokan declaring war on Wakanda and then on the rest of the world. Namor's plan doesn't make a whole lot of sense, as Talokan doesn't seem to have a terribly strong military once they lose the element of surprise, but for purposes of this movie, Wakanda has to find a way to fend off Namor and the rest of Talokan, with lives of important characters hanging in the balance.

Ramonda and Shuri even have to enlist the help of Nakia (Lupita N'yongo), the former lover of T'challa, to help with the effort, because she's an expert in languages. The mission doesn't need Nakia nearly as much as the movie needs Oscar-winner N'yongo. And if you think there's little reason to have her in the movie, wait until you see the flimsy reasoning behind another cameo late in the movie. It pains me to say it, but the forced cameo is where the movie lost me. Or if not there, then definitely a moment in a climactic battle that brings to mind one of the most laughable scenes in a rival superhero franchise.

For all its importance in saying goodbye to Chadwick Boseman, "Black Panther: Wakanda Forever" is a below-average MCU installment. Wakanda really is one of the greatest worlds within the MCU, which makes it all the more glaring that it's in danger from the cramped, primitive-looking Talokan. Also, if Wakanda was really going to defend itself without a Black Panther, the protector's name wouldn't be right there in the title. We know we're getting a new Black Panther, no need to spend so much time playing coy. I'm in no hurry to return to Wakanda after this movie.

"Black Panther: Wakanda Forever" is rated PG-13 for sequences of strong violence, action and some language. Its running time is 161 minutes.