There's a weird structure to "Captain Marvel," the latest entry in the all-powerful Marvel Cinematic Universe. Nick Fury (Samuel L. Jackson) sent out a distress call to Captain Marvel (Brie Larson) at the end of "Avengers: Infinity War." It is no secret that this movie is an origin story set in 1995 (Marvel Studios does not want us to get our hopes up and expect the business with Thanos to be resolved here), so in a way, we already know how this movie ends: Captain Marvel will be alive and reachable by some sort of super-pager, but at the same time be so far removed from relevant action that she hasn't been a part of the Avengers' adventures until now. Has she been retired? In hiding? On another planet? Another fair question: who exactly is Captain Marvel? 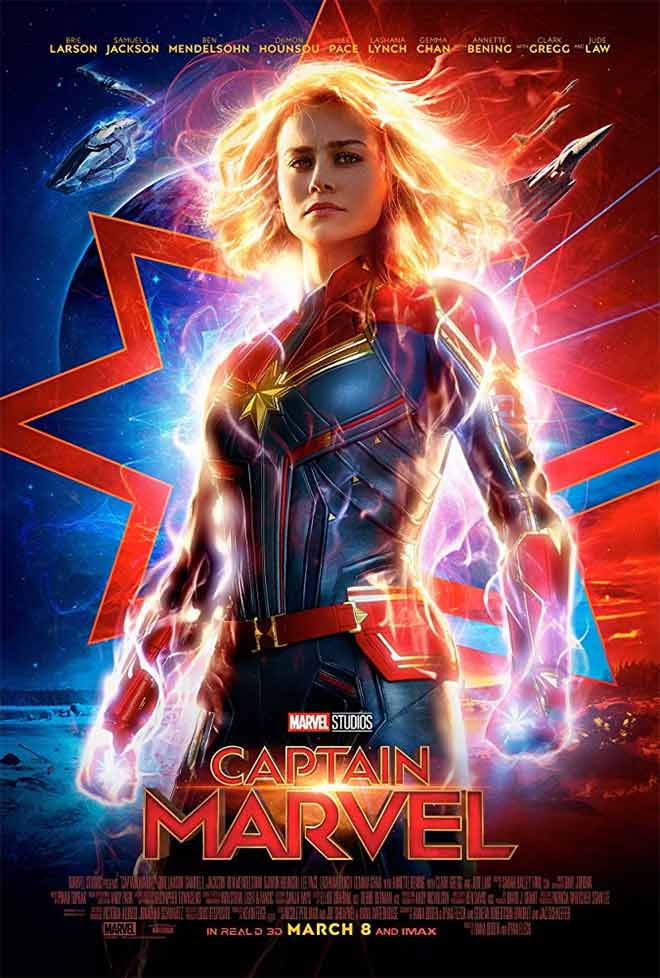 We first meet the character, known as Vers, as she fights on behalf of an outer space race called Kree against another outer space race called the Skrulls. The Skrulls are ugly and have a leader played by Ben "Hollywood's Go-To Villain Actor" Mendelsohn, so no need to question that they're bad guys. Vers likes being a Kree soldier, though she isn't crazy about the amnesia that has wiped out memories of all but the past two years of her life. Or having to answer to a mysterious Supreme Intelligence that takes the form of someone she respects, in this case a scientist (Annette Benning) whose significance she can't recall, but apparently has a special place in her subconscious. Or that her mentor (Jude Law) counsels her mostly through punches to the face and is constantly nagging her to keep her emotions in check. But she can fight Skrulls with the power of a lost energy-core, so that's pretty cool.

A battle with the Skrulls sees Vers crash-land on Earth, where she is first pursued by, and then joins forces with, a not-yet-cycloptic Fury. She begins to find out clues about her past, like that she was formerly an Earth-based Air Force pilot named Carol Danvers who was on a mission to protect Dr. Wendy Lawson (Benning) who had created an energy-core powerful enough to win the war between the Kree and the Skrulls. She meets up with some old friends, like fellow pilot and single mother Maria Rambeau (Lashana Lynch), and a cat named Goose. As soon as I saw that cat I knew how Fury was going to lose his eye. Cats are... let's say "jerks" like that. Truths are uncovered, battles are fought, and Carol discovers that she's stronger than she ever knew, in more ways than anybody thought.

"Captain Marvel" is a perfectly agreeable superhero origin movie. Larson is an extremely likeable lead, has great chemistry with Jackson and Lynch, and adds a much-needed female chapter to the MCU (still no Black Widow movie, though). Girls can look up to the way the character has spent her life overcoming obstacles in a recognizable version of society, unlike Wonder Woman, who spent her whole life in the bubble of Themyscira. Still, there's something played-out about the whole "superhero origin" template at this point, and this movie feels like it could be interchangeable with any number of similar movies from the past decade. The MCU claims that it's going to go on a break after this year, and that might be a good thing if it means we get a break from well-meaning but ultimately middling efforts like this.

NOTE: The moment in the film that caused the biggest reaction at my screening occurred not at the climax, or at a meaningful early victory, or even during the MCU's trademark mid- or post-credits sequences. It occurred at the very beginning, in the first thirty seconds or so. Be prepared for a huge ovation right off the bat.

"Captain Marvel" is rated PG-13 for sequences of sci-fi violence and action, and brief suggestive language. Its running time is 124 minutes.