As long as there have been The Avengers, there has been the threat of Thanos (Josh Brolin). The villain's visage first appeared midway through the credits of the superteam's first adventure back in 2012. Once 99% of the audience looked up who he was, they got excited to see him in an upcoming sequel. The most we've seen of him since then was in 2014's "Guardians of the Galaxy", which ironically was not an Avengers movie, though still an important part of the Marvel Cinematic Universe. We know that he's after six Infinity Stones, which he can plug into his handy gauntlet to give him power over... the universe, basically. The six-year wait is finally over and Thanos is ready to make his move. 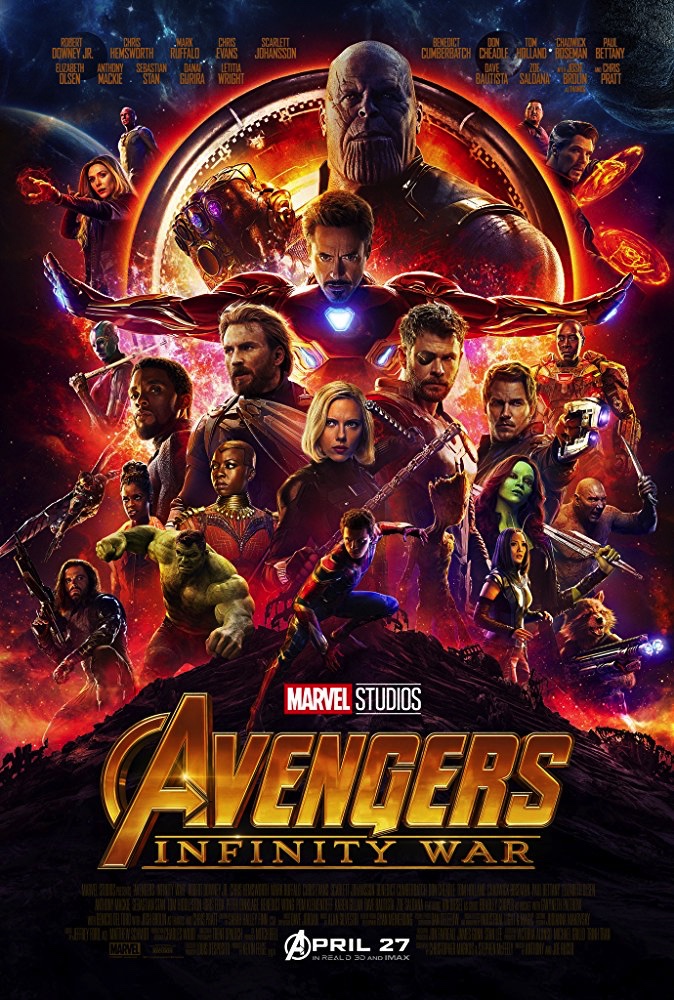 The heroes splinter off to go on various missions. The Infinity Stones are widely spread out on multiple planets, and of course Thanos and his minions need to be dealt with. Thanos, for his part, wants the Infinity Stones so he can kill exactly half the universe, leaving the other half to live off its finite resources. He fancies himself a misunderstood savior who's not as heartless as he seems. This "sensitivity" is on display in a scene where he must make a sacrifice to retrieve a stone. He does what everybody knows he's going to do (and what people at my screening were yelling at him to hurry up and do to move the movie along), but he feels bad about it. Funny that he cares so much about population control in the most overcrowded superhero movie in history.

The humor and action are exactly on par with what you'd expect from one of these movies. Egos clash over whose powers and plans are superior to others, and there's much teasing among the new teammates. As with most Marvel villains, Thanos has an army of indistinguishable creeps at his disposal so the heroes can take turns showing off their powers fighting them, though he himself can fight them all off rather easily. This movie really hopes you like the gag where a stooge is seconds away from a kill only to be suddenly stabbed from behind and then fall away to reveal an unlikely rescuer, because it's done multiple times here.

"Avengers: Infinity War" moves along a predictable path until it gets to an ending I didn't predict. I knew the franchise had been sauntering toward a showdown with Thanos, I just didn't know how many movies that showdown would encompass. Turns out it's more than one, which means the conclusion to this installment is unsatisfying. I don't necessarily disapprove of the unsatisfying conclusion, not every superhero movie needs to end with things wrapped up in a neat little package with just a hint of an upcoming conflict. There's another Avengers movie scheduled for 2019, so I'll have to wait until then to see if the MCU is willing to let things be right in the world again.

"Avengers: Infinity War" is rated PG-13 for intense sequences of sci-fi violence and action throughout, language and some crude references. Its running time is 149 minutes.