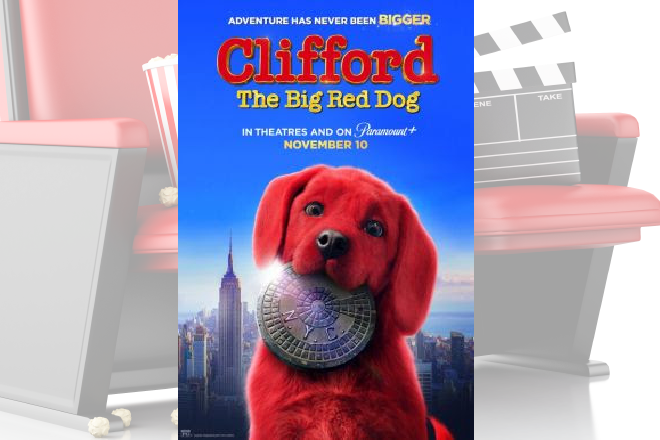 As a child, I loved the colorful storybooks about Clifford the Big Red Dog. As a teenager, I... had nothing against the cartoon. As an adult working in Times Square, I despised having to spend several hours a day this past week standing across the street from a billboard depicting a dead-eyed CGI Clifford holding a manhole cover in his mouth like a Frisbee. Maybe if this new Clifford looked anything like the expressive character from my childhood, I might be willing to go easy on him, but the "dog" in this movie is not the character kids know and love.

The movie sees moody Harlem 7th-grader Emily Elizabeth (Darby Camp) left in the care of her irresponsible uncle Casey (Jack Whitehall). The only bonding activity that interests the teen is visiting an animal adoption tent run by the mysterious Mr. Bridwell (John Cleese). She takes to a lost bright red puppy that Casey refuses to let her have for several good reasons, not the least of which is that their apartment's super (David Alan Grier) enforces a strict "No Pets" policy in the building. But the dog follows her home, Casey can't say no to those puppy dog eyes (more from his niece than the actual puppy dog) and he says it can stay just for the night. Emily Elizabeth foolishly gives the dog a name, which adults know will make it that much harder to separate the two later, and perhaps even more foolishly makes a wish that Clifford will get big. This being a kids' movie with a magical John Cleese, she wakes up in the morning to find that Clifford is still a dog and still red, but now really, really big.

The enormous Clifford causes immediate problems for Emily Elizabeth and Casey. He wrecks about every piece of furniture in the apartment, causes a scene in Central Park when he has to use the bathroom, and requires a visit with an unhelpful vet (Kenan Thompson). But he also saves the life of a friendly local lawyer (you better believe I made the joke about that being more far-fetched than a huge red dog), so Emily Elizabeth knows he has a good heart. Meanwhile, an engineering tycoon (Tony Hale) wants Clifford all to himself so he can study what makes him so big in an evil plan to cure world hunger. Wait, why is his plan so evil? Mark my words, this character has a future as an entry in those "Villains Who Were Right All Along" articles. The rest of the movie sees Emily Elizabeth and Casey racing to protect Clifford, which may mean sending him away to an animal sanctuary in Asia. Oh no, please don't let Clifford get sent to a huge sanctuary where he'll be able to frolic in peace. The teenager from the crowded urban neighborhood with no idea of how to take care of him wants him as a pet.

The terrible advertising for "Clifford the Big Red Dog" actually played to the movie's advantage, since my opinion had nowhere to go but up. But it does deserve a lot of the ill will that I had going in. The movie is filled with uninspired stock characters, sitcom-level dialogue, nonsensical motivations, and many, many painful jokes. And yet, I'll throw out a few compliments. The CGI dog isn't as off-putting in motion as he is staring ahead. Camp is surprisingly decent when it comes to getting me to care about the relationship between Emily Elizabeth and Clifford. And John Cleese so effortlessly charming that I'm willing to give this movie a C- rating by a hair. No, not a huge Clifford hair, more like whatever you can find on Tony Hale's head.

"Clifford the Big Red Dog" is playing in theaters and available for streaming on Paramount+. The film is rated PG for impolite humor, thematic elements, and mild action. Its running time is 97 minutes.