Valek the demonic nun is the stuff of nightmares. Annabelle the possessed doll is a freaky sight. La Llorona is about two-thirds as scary as either of them. Her yellow eyes certainly aren't inviting, nor is her constant stream of tears that could easily be mistaken for blood. But her face is reasonably well-proportioned and she has to open her mouth really wide to give you the full effect of her ghastliness.

La Llorona (Marisol Ramirez) is the latest supernatural entity from the "Conjuring" universe, arguably the most lucrative franchise in horror right now (assuming Jordan Peele doesn't count as a "franchise"). With a name that translates to "The Weeping Woman," La Llorona is the ghost of a Mexican woman who drowned her two children, killed herself out of guilt and sadness (hence the tears), and now roams the Earth looking for replacement children... that she can drown again. Nobody said she was one for sound logic.

Anna (Linda Cardellini) is a single mom in 1973 Los Angeles. She's a social worker, assigned to the case of fellow single mom Patricia (Patricia Velasquez). Anna is shocked to discover Patricia's two children locked in a closet, and takes them into custody, despite Patricia's pleas that they be returned to the closet. Later, at the child services center, the boys are abducted by La Llorona and drowned. Patricia blames Anna and prays that La Llorona go after her children next.

Anna's children Sam (Jaynee-Lynne Kinchen) and Chris (Roman Christou) are haunted by La Llarona, as is Anna herself. None of them want to admit to the others that they're being haunted by a ghost for fear of disbelief and mistrust, so it takes a while for all of them to get on the same page. Once they do, they reach out to Rafael (Raymond Cruz), a former priest who knows how to deal with evil spirits. Can he save the family from La Llorona? Probably, but the real question is, given how many stupid mistakes they make, who's going to save these people from themselves? Your dolly can stay on the other side of the sanctified doorway until morning, sweetie.

If you've ever seen a "Conjuring" movie, you know the formula at work here. La Llorona spends half the movie with no greater aspiration than to give people a cheap jump scare. Characters investigate darkened rooms and ominous hallways (credit to the movie for making these hallways look really, really ominous), and you wonder where she's going to come from, but a lot of times this movie cheats and she's all of a sudden just in a shot, having apparently taken advantage of some inconsistent powers of invisibility. 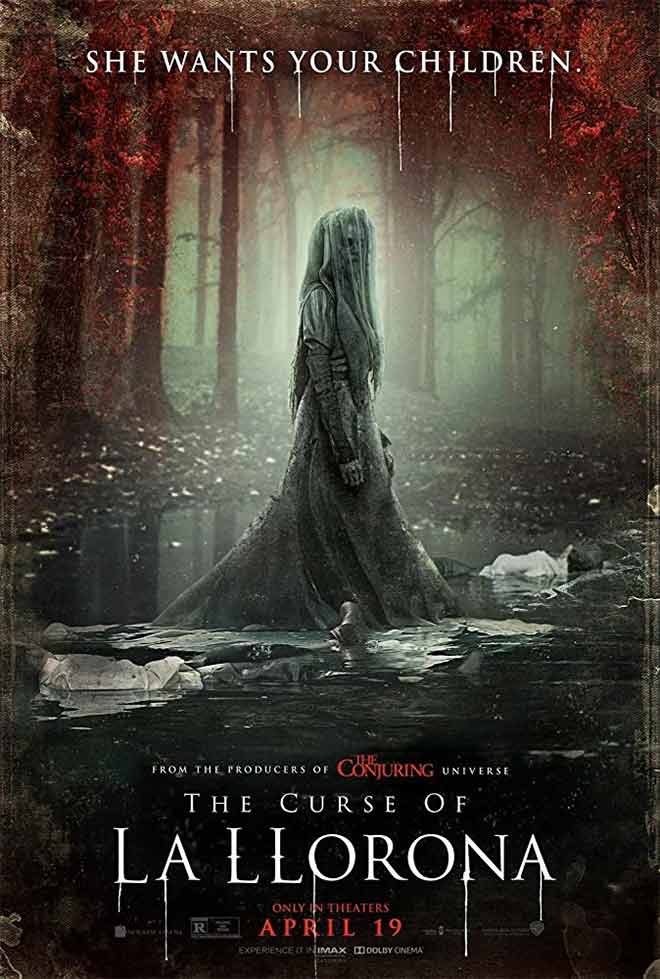 The characters get terrorized, but the R rating on this movie is a joke. The drownings are bloodless, a non-fatal shooting is bloodless, even an impaling of dubious fatality is bloodless. The only bit of violence that leaves any kind of mark is that people get burns from La Llorona's tears. Don't worry parents, the MPAA has seen fit to protect your children against scenes of injurious crying. Not that I'd recommend this movie to kids - or anyone else - even if it was PG-13.

"The Curse of La Llorona" is just another entry into the "Conjuring" series. If this was ten years ago, I'd say it was designed to pad out a DVD box set. I'm annoyed that it got to dominate a holiday weekend at the box office, though I know the only reason it did so well is because all the decent movies were rightly scared away by "Avengers: Endgame" opening next weekend. And who knows, maybe this movie will get to capitalize on a surprisingly lucrative "Avengers is sold out, should we see something else?" market. But even then, this movie should be considered a low priority.

"The Curse of La Llorona" is rated R for violence and terror. Its running time is 93 minutes.