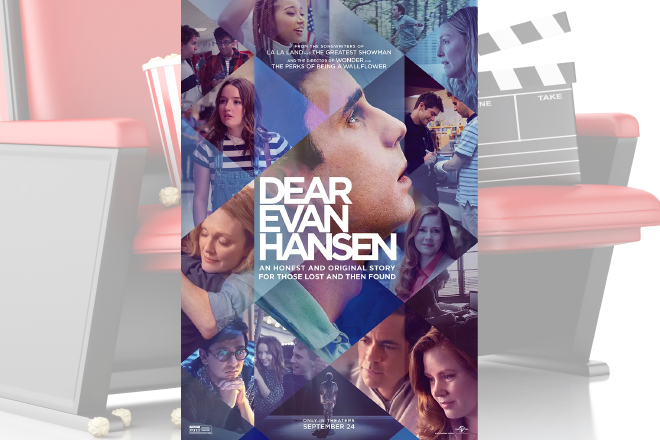 The film is based on a Tony Award-winning musical that opened in 2016. Lead actor Ben Platt himself won a Tony playing Evan Hansen, and now he's bringing his portrayal to the big screen. Problem is, Hansen is a high school senior, and while Platt could get away with playing the character onstage at age 23, playing him onscreen (with close-ups) at 27 is a much harder sell. Fortunately, his acting and singing are so good that the things about the performance he can control should make you forget about the things he can't.

Social anxiety-ridden Evan is heading back to school with a broken arm. This is shaping up to be another year where he won't make any friends. His closest confidant Jared (Nik Dodani) insists that they're not really friends and won't even sign his cast. He pines after crush Zoe Murphy (Kaitlyn Dever), even though she comes with the baggage of her disturbed brother Connor (Colton Ryan). As a therapy exercise, Evan writes a letter to himself talking about wanting to get to know Zoe better. Connor finds the letter talking about his sister and angrily confiscates it, but not before sarcastically signing Evan's cast. Soon after, Connor commits suicide.

Connor's mother (Amy Adams) and stepfather (Danny Pino) are naturally devastated, but there's a tiny ray of sunshine. Connor was in possession of Evan's letter, which taken out of context, makes it look like he wanted to be a better brother to Zoe and that he and Evan were friends. The signature on Evan's cast seems to confirm that their son was able to form a connection with someone, which brings the parents great joy. Not wanting to hurt the grieving family's feelings, Evan goes along with the story they've fabricated. But soon he's the one fabricating stories, spinning tales of he and Connor spending hours together at an orchard. Soon he's the voice of Connor's memory and setting up a foundation with overachieving classmate Alana (Amandla Stenberg). He's also spending more and more time with the Murphy family, especially Zoe, at the expense of precious quality time with his overworked nurse mother (Julianne Moore). Evan's swelling ego and web of lies are bound to catch up with him sooner or later.

I never saw the stage version of this show, but I understand the third act has been rewritten for the transition to the screen. That may explain why it's such a mess. One character takes a near-villainous turn and everybody seems a lot more miserable once they no longer have Connor and Evan's friendship for inspiration, a misery that is never really rectified. There's an act of atonement that supposedly makes things better, but it's such a cold comfort at that point that it barely registers.

"Dear Evan Hansen" has been widely panned for Platt's age and the third-act changes, and I'm not saying those elements aren't problematic, but they weren't deal-breakers for me. I still found a lot to like about Platt's performance and his chemistry with Dever, Adams, and Moore. This isn't going to go down as a "classic" movie musical, but it isn't a "Cats"-level disaster.