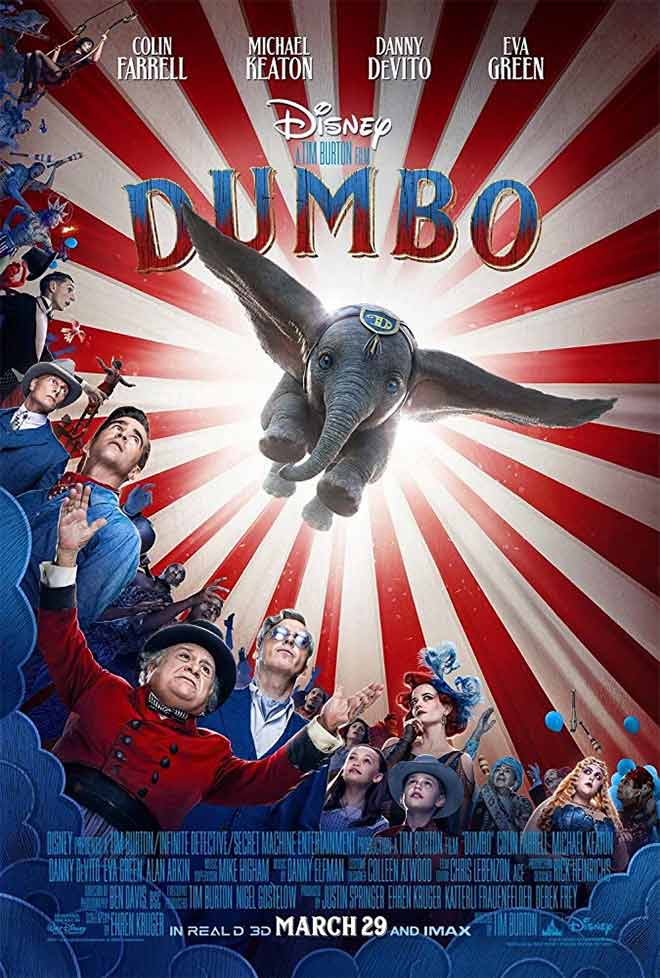 The film largely follows Holt Farrier (Colin Farrell) and his children Milly (Nico Parker) and Joe (Finley Hobbins) as they travel with a circus in 1919. Holt is a trick rider who has just returned from war minus an arm. He can't ride anymore, and even if he could, Max Medici (Danny DeVito), the circus's owner and ringmaster, has sold all the horses. There's only one way for Holt to earn a living in the circus now, and that's by tending the elephants, one of whom has just given birth. The kids are immediately enamored with the baby elephant, even though the grownups grouse that its ears are too big (because elephants aren't known for big ears, apparently). The baby ruins a performance, which earns it the moniker Dumbo (instead of Jumbo) and leads to its mother being sent away when she comes to rescue it from a hostile crowd.

All seems lost for poor Dumbo, but then the kids discover that he has a unique ability, he can fly. His ears flap and lift him off the ground when he catches whiff of a feather. Dumbo becomes an overnight sensation, earning the attention of circus mogul V.A. Vandevere (Michael Keaton) who wants to put him in an act with his trapeze artist girlfriend Colette (Eva Green). Vandevere buys the whole Medici circus and hires Holt and his kids as Dumbo's handlers. The kids think that if they can train Dumbo to sell enough tickets, Vandevere will reunite him with his mother. And really he should, because he owns the mother and Dumbo is at his best when she's around. But Vandevere has to overthink things and concoct an evil scheme that is sure to leave everyone miserable if it succeeds, probably including him.

"Dumbo" makes a mistake focusing so much on humans, partly because we could spend all day fawning over adorable little Dumbo and partly because the human characters aren't that interesting. The kids in particular are annoyingly wooden, though DeVito as the shyster carnie steals the movie. The plot is a mess, filled with problems that could easily be solved by humans simply realizing that elephants have to power to crush them so they shouldn't antagonize them. And there's an ill-advised cameo that took me right out of the movie when a modern catchphrase was invoked in 1919. But I couldn't stay mad at this movie. Maybe it was because it opens on a visually spectacular note with a well-designed circus train, a piece of magical eye candy courtesy of director Tim Burton. Maybe it was because I liked the little world of circus life contained within the film. But the reason I'll choose above all is that Dumbo himself has such an infectious presence, infectious enough that it just barely saves this film.

"Dumbo" is rated PG for peril/action, some thematic elements, and brief mild language. Its running time is 112 minutes.