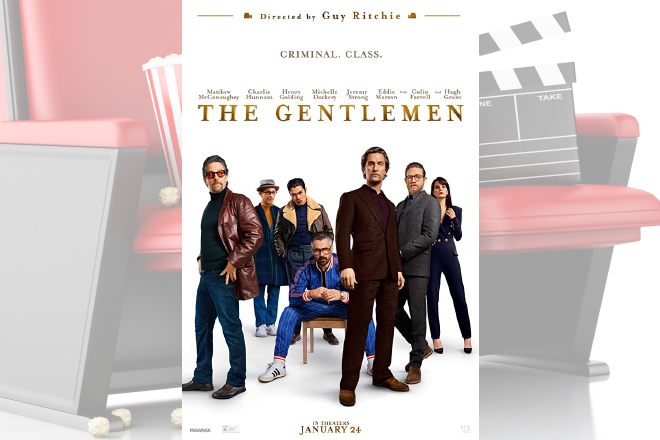 NOTE: This is a retroactive look at a movie I would have reviewed back in February had I not been on vacation during the relevant weekend.

"The Gentlemen" marks director Guy Ritchie's return to the genre that made him famous: snappy British crime thrillers. He's best known for "Snatch," "Lock, Stock and Two Smoking Barrels," and movies of that ilk. He's stepped away in the past few years to direct unrelated projects like the live-action version of "Aladdin" and the dismal "King Arthur: Legend of the Sword." This film sees Ritchie back in his apparent comfort zone, and it's smashing to see his signature style going full blast. That is, it's smashing to see the style for about thirty minutes until it becomes apparent that the script has "gotten away" from Ritchie and the movie is a baffling mess.

Much of the movie takes place during a conversation between private investigator Fletcher (Hugh Grant) and Raymond (Charlie Hunnam), the right-hand man of drug lord Mickey Pearson (Matthew McConaughey), who is attacked by an assassin in the opening scene. Fletcher spends this time recapping events and information that Raymond would be privy to, meaning that all this storytelling is for the audience's benefit, as opposed to the characters'. In other words, 90% of the Fletcher/Raymond conversation could be preceded by the phrase, "As you know..."

Pearson had quite the cast of characters bouncing around in his life. He had angered media baron Big Dave (Eddie Marsan), considered selling his drug empire to Jewish billionaire Matthew Berger (Jeremy Strong), made an enemy of Chinese gangster Dry Eye (Henry Golding), rescued spoiled aristocrat Laura Pressfield (Eliot Sumner) from a Russian drug den, gotten teen mentor Coach (Colin Farrell) on his bad side, and been a loving husband to Rosalind (Michelle Dockery). And Fletcher and Raymond were there for all of it in some form. Someone wants Pearson dead, or wanted him dead, we don't know exactly where the attack from the opening scene falls in the timeline. However things play out, it is clear that Fletcher wants to be paid handsomely for his investigative services.

It should go without saying that this crime thriller has lots of twists and turns, but there are so many, and the timeline is so out of whack, and Fletcher is such an unreliable narrator, that it soon becomes apparent that nothing we're seeing is worth taking seriously, and thus my interest waned. Eventually even the "clever" dialogue (about a 50/50 split between funny and annoying) and fun performances by the entire cast (Grant and McConaughey are particularly crisp) weren't holding my attention anymore. I even got bored of a certain swear word that's more common in the U.K. than it is here. It's a word that I hear so rarely in the real world, yet here is used so often and so casually that this movie manages to strip it of all its sharpness and shock value.

"The Gentlemen" may not be the worst movie of the year - the characters, dialogue, and action are highly enjoyable until everything starts to mush together about halfway through - but it is quite possibly the most disappointing. I consider the team-up of Grant (90's), McConaughey (00's), and Golding (10's) to be a meeting of three decades' worth of Hollywood's greatest romantic comedy leading men, and Hunnam, Strong, Marsan and Farrell are by no means hurting (and I'm sure Dockery could have held her own if the script would have let her character be more interesting). But this project is surprisingly directionless for a movie whose advertising put a lot of emphasis on the director.

"The Gentlemen" is available through Video On Demand. The film is rated R for violence, language throughout, sexual references and drug content. Its running time is 113 minutes.

Contact Bob Garver at rrg251@nyu.edu. Visit www.bobatthemovies.com and leave suggestions in the Comments section for On Demand movies for me to review in the coming weeks.