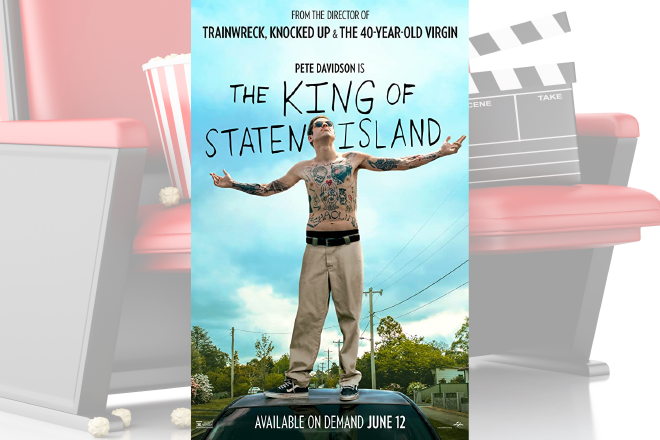 Back in 2015, director Judd Apatow briefly turned comedian Amy Schumer into a movie star with "Trainwreck," a semiautobiographical film where the protagonist's actions were fictionalized, but much of the dialogue, situations, and character traits were taken from Schumer's own life. Now Apatow hopes to find similar success with Pete Davidson in "The King of Staten Island," where Davidson plays a fictionalized version of himself and has conversations he's probably had in some form in his personal life. Even though the film is based on the real life of an individual with a unique story to tell, the film still can't feel anything but formulaic.

Davidson plays Scott Carlin, a 24-year-old slacker with a myriad of mental health issues, many of which are related to the death of his firefighter father (killed in a nondescript hotel fire and not in the 9/11 attacks like Davidson's real father) when he was a child. He spends his days hanging out with his friends, annoying his widowed mother Margie (Marisa Tomei) and sister Claire (Maude Apatow), and taking his girlfriend Kelsey (Bel Powley) for granted. He won't get a job or take his relationship seriously because he figures people with his emotional baggage shouldn't be in the workforce or making a partner miserable (that's his excuse for his laziness, anyway). The closest thing he has to an aspiration is to become a tattoo artist, and even to this he doesn't really commit, practicing goofy designs of his choice on anyone who's willing to offer up their skin... including a nine-year-old boy.

The boy's father is Ray (Bill Burr), a firefighter who is none to happy about the damage done to his underage son. He shows up at Scott's house to yell at him, but meets Margie at the door, and doesn't feel like yelling at her. In fact, he's soon asking her out for coffee, and the two pursue a relationship. This does not sit well with Scott, who doesn't like Ray and is opposed to his mother dating another fireman. He doesn't even approve of firemen dating anybody, since there may come a day where they don't come home to their loved ones, a belief he is only too happy to share with Ray and his chief (Steve Buscemi).

With Ray quickly becoming a stronger presence in the household, and Margie wanting to give him a push anyway, Scott soon finds himself fighting to retain his effort-free existence. It shouldn't be a spoiler to say that he is going to have to learn a few things about responsibility, the way Seth Rogen's character did in quintessential Apatow comedy "Knocked Up." Really, it's the same arc all protagonists go through if they're established as lazy at the beginning of a movie. Supposedly this one is different because it has touches of Davidson's real-life story and personality thrown in, but I'm sorry, going by this movie I would think that Davidson's life was only averagely exciting at best and downright uninteresting at worst.

"The King of Staten Island" boasts dedicated performances from Burr, Buscemi, Powley, Tomei, and even Davidson when he's not doing tired stoner schtick. The script is often funny and sometimes poignant in later stages, but as with many Apatow movies, there's too much of it (do we really need a whole sequence to establish that the immature Scott has a "talent" for fitting in at drug-fueled college parties?), especially for a story this tired. Maybe it's that Apatow has gone to this well too many times or that something isn't firing right with the unproven Davidson, but for the second week in a row I'm reviewing a movie that went straight to On Demand, and for the second week in a row I get the feeling that the movie wouldn't have been able to survive long in theaters.

"The King of Staten Island" is available On Demand through online streaming services and likely through your local cable provider. The film is rated R for language and drug use throughout, sexual content and violence/bloody images. Its running time is 136 minutes.