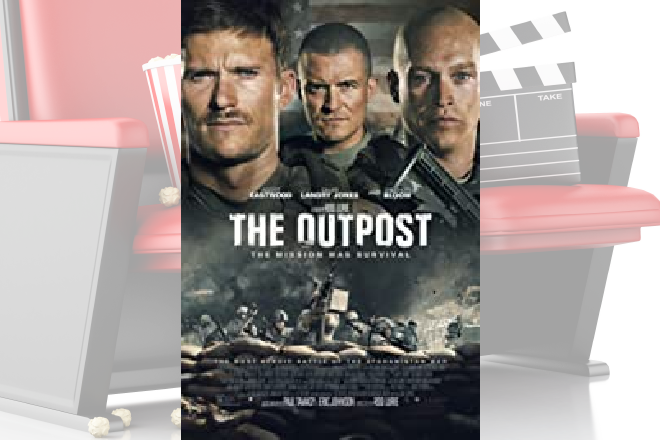 A few days ago, I reconnected with a friend that I hadn't seen since before the theater shutdown last March. He asked me the standard pleasantry, "Seen any good movies lately?" and I had to tell him, "No, not a single one." I hadn't seen a movie that I felt was worth recommending since "Onward" back in February (my June recommendation for "Uncut Gems" doesn't count because I saw that movie in December of last year). But a few days later, I finally saw a movie that broke the streak in "The Outpost." This movie has a climactic sequence that belongs on the big screen with theater-grade sound equipment more than anything I've seen this year, including "Onward."

The bad news is that it's kind of a slog to get there. The film takes place at a U.S. military outpost in Afghanistan from 2006 to 2009 (at least that was the real-life chronology, the movie may be fictionalizing a shorter timeline). Since almost every character with dialogue is a soldier with their head near-shaved, it's distractingly hard to tell them apart. Lead actor Scott Eastwood has a mustache, that's somewhat helpful. Orlando Bloom is advertised for this movie, he's the one having a noticeably hard time hiding his British accent. There's a guy with glasses, and a few I could tell apart by skin tone, but that's it. I had to look up which character was played by third lead Caleb Landry Jones (it's a guy named Carter), and even then I could only tell which one he was because he sounded like the one who had done a lot of crying recently. The names of about fifteen soldiers are flashed up really quickly at the beginning, and I was thinking, "I hope I'm not supposed to remember all of this." There's so much text onscreen in the first five minutes that I was afraid I wouldn't be so much watching this movie as reading it.

Then we get about an hour of watching the soldiers go about their daily lives, with the outpost passing from one leader to another. This is a necessary evil of military movies, the humanization of characters we know aren't all going to make it to the end. A montage of phone calls to loved ones is particularly touching - but also ominous. Then again, a lot of the dialogue in these scenes consists of joking around, and these guys aren't great with their comedic timing. I'm not saying they're terrible, but I've heard funnier, more endearing jokes in other military movies.

The climactic battle sequence starts 1 hour and 7 minutes in, and goes until 1 hour and 42 minutes. Those 35 minutes are incredible. "1917" recently won three Oscars for battle-based special effects, and this film matches its prowess - maybe even surpasses it. Bullets are whizzing by the characters at every turn, or at least they "whiz by" if they're lucky. I was honestly hoping some of them would get hit just to put an end to the nightmare, but these are heroes and they persevere. Needless to say, the characters' real-life counterparts cannot be thanked enough for their service.

"The Outpost" may look like middling On Demand fare from its advertising, and the first hour is nothing special by war movie standards, but once the battle kicks in, all is forgiven. This would easily be the best movie of the year were there not so much junk at the beginning weighing it down. As it is, it is merely the film with the best sequence of the year. Still, that's enough to get an overall recommendation from me, at a time when I needed reminding that there are still movies worth recommending.

"The Outpost" is available On Demand through streaming services and likely through your local cable operator. The film is rated R for war violence and grisly images, pervasive language, and sexual references. Its running time is 123 minutes.

Barrett sworn in as Supreme Court...

Colleges and the Thanksgiving COVID-19...