The top two movies in the country right now have the exact opposite premise. "Shazam!" is about a young boy who is happy when he turns into an adult. "Little" is about a grown woman who is miserable when she turns into a child. I guess a good companion piece would be "The Hot Chick," where overgrown teenager Rachel McAdams turns into man-child Rob Schneider. Eh, probably best just to stick to the two new films. 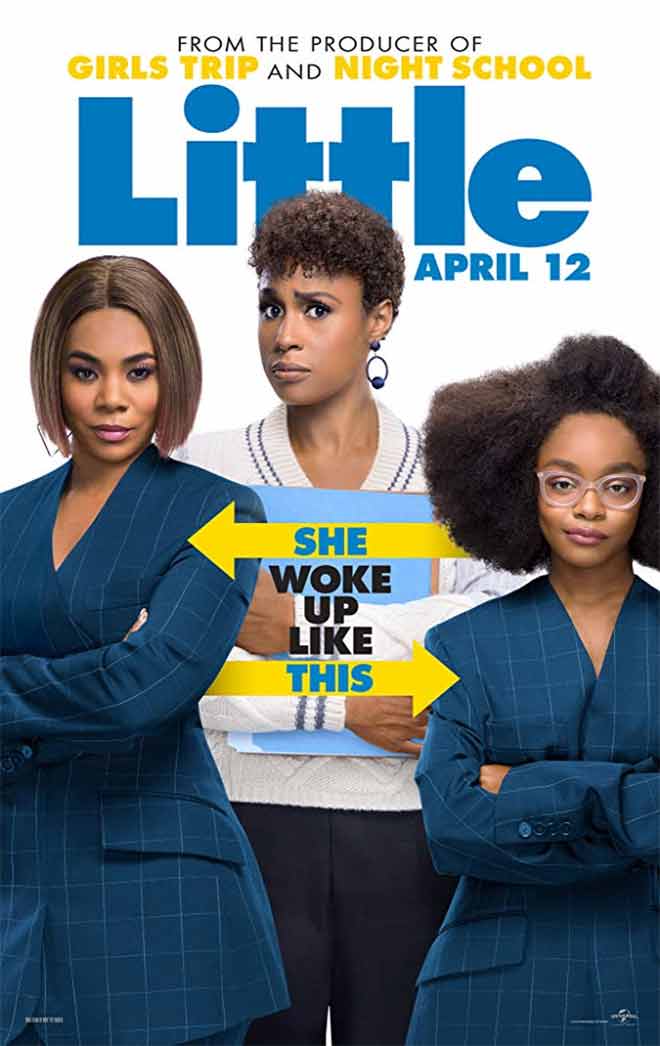 "Little" stars Regina Hall as tech mogul Jordan Sanders. She's a genius entrepreneuse, but also a demanding bully, having taken the wrong lesson from a "someday you'll be the one in charge" speech when she was 13. Her staff fears and hates her, especially April (Issa Rae), her undervalued assistant who wants to pitch an app that would make her a star in the company. The latest victim of Jordan's outrage is a nearby donut truck, whose driver's daughter wishes Jordan would go back to a time before she was so mean. In other words, she wishes she was little.

Jordan wakes up the next day as her 13-year-old self (Marsai Martin, the youngest executive producer in history thanks to this film). Suddenly all her power is gone: people don't move out of her way, she can't get coffee the way she wants it, and her building's valet isn't about to hand car keys over to a minor. She enlists April to cover for her at the office and try to track down the cursed donut truck, and April agrees on the condition that she gets to pitch her app.

Complications arise when Child Protective Services learns that Jordan has an unauthorized minor living in her apartment. An agent (Rachel Dratch) insists that she be enlisted in school. For some reason, neither Jordan or April thinks to just enlist her in home school so she can run the company from her apartment all day. No, it's much more fertile ground for comedy if Jordan is sent back to public school, where she's haunted by memories of her unpopular past. And things haven't gotten any easier now that technology has advanced and cyber-bullying is a thing.

From here, the film goes through pretty predictable territory where April needs to learn a lesson about self-confidence and Jordan needs to learn a lesson about selflessness, which takes the form of helping the uncool kids perform in a talent show. There are detours where Jordan tries to get her hands on wine, an impromptu karaoke performance (which got some serious applause at my screening), and her libido being activated by her teacher (Justin Hartley) and boyfriend (Luke James). Cringey comedy about men being uncomfortable with a teenage girl hitting on them isn't really my thing, but apparently some people like it.

"Little" is a mixed bag. Martin and Rae have terrific chemistry, and it is funny to see Martin inflict Jordan's overbearing personality on the world around her. But too many gags are just low hanging fruit, along the lines of the "my hair was out of control at this age" variety. At least it's better than "What Men Want," that other "black people do the opposite premise of a famous white-led comedy" movie from earlier this year. Mind you, it's not better by much, maybe just a... "Little."

"Little" is rated PG-13 for some suggestive content. Its running time is 109 minutes.

NOTE: I also caught the animated adventure "Missing Link" this weekend and found it to be a delight, the best movie of 2019 so far. I highly recommend checking it out, especially if you have kids and want to make a family night out of it.

Friday Is the last day to schedule an...