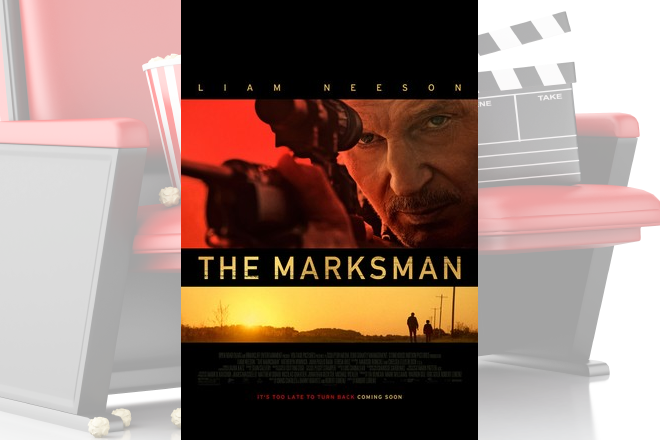 "The Marksman" has the unfortunate timing to come out less than a month after "News of the World." Although the two movies are set over 150 years apart, the plots are very similar: a crusty adult has to go on a long, dangerous journey with a child they don't know, to the point where they don't even speak the same language. But while "News of the World" was able to get a plum Christmas release date, thanks in no small part to the star power of Tom Hanks, "The Marksman" feels like it was always destined for the doldrums of January, even with Liam Neeson attached.

Neeson plays Jim Hanson, a former Marine, recent widower, and current rancher on an Arizona farm on the U.S./Mexico border. He spends his days fretting how he's going to pay back a bank loan and occasionally reporting illegal immigrants to his agent stepdaughter (Kathryn Winnick). One day he spots mother Rosa (Teresa Ruiz) and son Miguel (Joe Perez) making a feeble attempt to flee into the country. Not far behind them is a group of cartel assassins, hunting them down after Rosa's brother betrayed their boss. In one of the film's disappointingly few action sequences, Hanson engages the men in a shootout and kills the brother of the leader (Juan Pablo Raba). But Rosa is mortally wounded (not a spoiler, since this is established in the trailer), and she makes Hanson promise to take Miguel to relatives in Chicago before she dies.

Hanson has to first rescue Miguel from Border Patrol, even though the ungrateful Miguel says that Hanson is indirectly responsible for his mother's death. I say that without Hanson, the cartel guys would have caught up with them about ten seconds later and killed them both, but there's hard feelings anyway. Hanson and Miguel go on the run with the cartel members not far behind them. The cartel guys are ruthless, burning down Hanson's house and killing people who make even fleeting contact with them (one poor girl looks like she's too young to drive, let alone work at a gas station).

Hanson hates having to shepherd Miguel at first, but eventually the two bond. This movie plays the stupid angle where Miguel spends about half the movie pretending he doesn't speak English, but then it turns out that he does, he just wanted to mess with Hanson. Hanson teaches Miguel how to shoot, having him practice on cans in a scene that will no doubt come into play during the climax. Miguel has a backpack full of cartel money, which briefly comes between the two... until it doesn't. This scene elicited audible groans from everyone in the theater, which I'm proud to say I kicked off. The climax takes place in a barn, an odd choice of venue considering the movie has spent so much time building up Chicago that I was expecting something a little more urban. And the actual ending is ridiculous, with a fatal twist that could be undone by simply changing the order of certain events.

The best thing I can say about "The Marksman" is that Neeson and Perez have pretty good chemistry. It's not particularly memorable, but it's cute how they share affection for Hanson's dog (the dog, by the way, is memorable). But the movie is not done any favors by its script or action. It's not even titled very well, Hanson's marksmanship is barely mentioned and I kept having to remind myself what the movie was even called. I'd say this movie is a disappointment as a Liam Neeson action vehicle, but there's so little action that it barely qualifies as one, it's more of a road trip movie with action sequences at the beginning and end. By all means see this movie to support your local theater, but only after you've seen better movies like "News of the World."

"The Marksman" is playing in select theaters, check local listings for showtimes. The film is rated PG-13 for violence, some bloody images and brief strong language. Its running time is 108 minutes.