Movie Review - News of the World 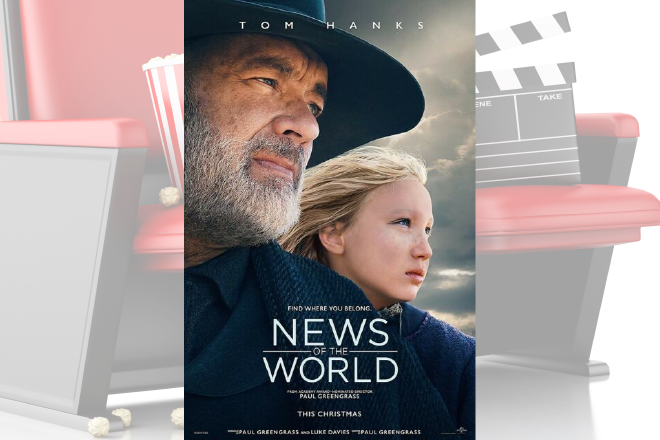 One of my favorite children's books is "The Phantom Tollbooth" by Norton Juster. There's a scene where the main characters are driving through a lush green landscape. They comment on the view, saying that it's beautiful, but then a new character chimes in and says, "If you happened to like deserts, you might not think this was beautiful at all," and this leads to a whole conversation about perspective. "News of the World" is a movie for people who happen to like deserts. Ironically-named director Paul Greengrass makes sure we get plenty long, loving looks at the rocky, rugged greatness of rural Texas circa 1870. This is a world where if your carriage wheel breaks, you're stranded a barren wasteland. I cannot imagine liking a world where such circumstances are possible, but whatever there is to like about this setting, Greengrass capitalizes on it.

Tom Hanks stars as Captain Jefferson "Kyle" Kidd, a Civil War veteran who now ekes out a living going from town to town reading newspapers to paying audiences. He's essentially a primitive newscaster, and he's not very good at his job. Yes, he can read in an era when many can't, but his readings are cold, with his face about two inches away from the page. Memorization, or at least a rehearsal, would do him well. But the work keeps him busy, and that's what he needs.

One day Kidd comes across a ransacked wagon with a scared little girl later named Johanna (Helena Zengel) as its sole survivor. Kidd learns through paperwork that Johanna is the child of German immigrants who were killed by Kiowa Indians, who raised the girl until they themselves were killed. Not wanting to leave the child abandoned, Kidd takes her to the nearest town where he learns that the official who can take her to her distant relatives won't be back for three months. He'll have to take Johanna to her relatives himself, even though he doesn't know anything about looking after children, especially one that doesn't speak English.

Kidd and Johanna travel across Texas doing readings and having mini-adventures along the way. Three no-good ex-Confederates want to buy Johanna for her fair German skin. Kidd declines, and a shootout ensues. An evil town leader wants Kidd to read from his self-published newspaper, which is loaded with propaganda articles that are false, feigned, forged, fraudulent, etc. The aforementioned hunk of junk carriage breaks down with a dust storm imminent. Kidd finally reaches Johanna's relatives, but leaving her with them doesn't seem right.

At the heart of the film are the Hanks and Zengel performances. Hanks is his usual excellent self, playing one of the more "broken" characters of his illustrious career. Zengel makes a memorable debut. The last time I can remember a teenage girl having a presence like this in a Western, it was Hailee Steinfeld in "True Grit," and now she's a big name in both movies and pop music. I could easily see Zengel finding similar success in her career, maybe more.

I can't say there's much wrong with "News of the World," other than maybe an air of predictability. At the same time, I have to acknowledge that this movie isn't enthralling enough to win over people who aren't in the mood for something so... rustic. I don't "happen to like deserts," I like bustling urban landscapes, and I was always relieved when the characters would reach a town, the busier the better. If this movie looks like your cup of tea, then you'll probably enjoy it, and if it doesn't, you'll still probably find something to appreciate even if it mostly feels like a slog.

"News of the World" is playing in select theaters. Please wear masks and follow all safety guidelines if seeing the film in a theater. The film is rated PG-13 for violence, disturbing images, thematic material and some language. Its running time is 118 minutes.