Veterans Day is not a holiday one typically associates with new movies, either in terms of box office or subject matter. With box office, there's a clamor over which movie gets to dominate Christmas weekend, Thanksgiving, Easter, even the similarly military-themed Memorial Day, but ironically there's not much of a battle over Veterans Day. In terms of subject matter, every year is going to bring a few war movies, but barely any of them choose to capitalize on Veterans Day, usually opting to open as a summer blockbuster or December awards-season darling. This year is different, however. This year, Veterans Day weekend was won by "Midway," a war movie whose business strategy included conquering Veterans Day and not much beyond that. It beat out the too-late-for-Halloween "Shining" sequel "Doctor Sleep" by an estimated $3 million and the too-early-for-Christmas "Last Christmas" by an estimated $6 million. I guess the lesson is to open at the appropriate holiday. 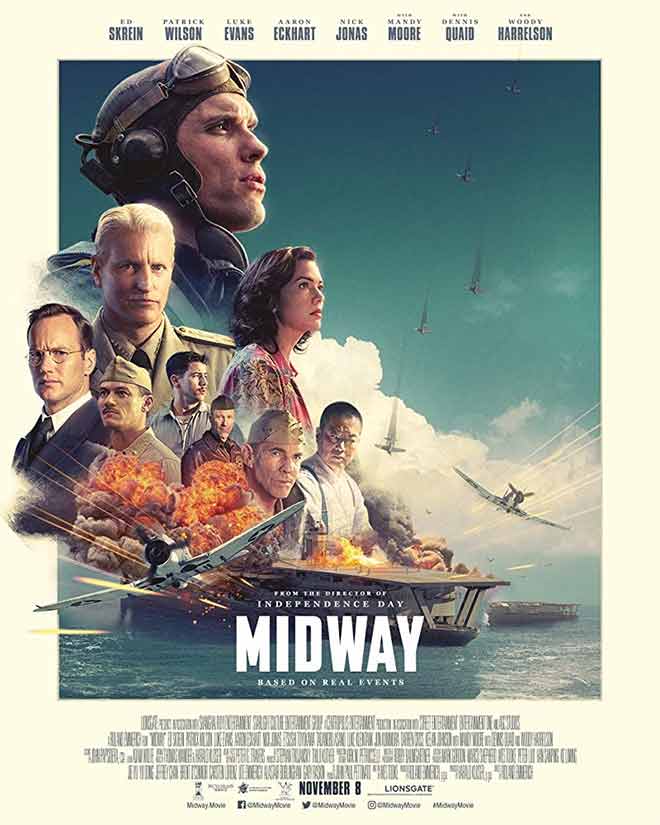 Speaking of patriotic holidays, "Midway" is directed by Roland Emmerich, helmer of all-time holiday cash-grab champion "Independence Day." He's known for movies like that, "Stargate," the 1998 "Godzilla," and other critically-derided, special effects-driven blockbusters. It reminds me of another filmmaker with a similar reputation. In 2001, Michael Bay was known for overblown popcorn flicks like "The Rock" and "Armageddon." He turned his attention to WWII and put out "Pearl Harbor," which... immediately earned a reputation as one of his worst overblown popcorn flicks. Emmerich is taking some very familiar steps here, and yeah, the results are pretty much the same.

The film follows real-life WWII officers and personalities from the attack on Pearl Harbor to the Battle of Midway, a naval battle that gave the United States a crucial victory. Hotshot pilot Dick Best (Ed Skrein) becomes commander of his squadron and loses his trademark confidence when charging others with risking their lives the way he's willing to risk his own. Intelligence Officer Edwin T. Layton (Patrick Wilson) was relatively sure that the Japanese were going to attack Pearl Harbor, and lives were lost because of his ineffectiveness. He and Admiral Chester W. Nimitz (Woody Harrelson) are determined to not let that happen at Midway... unless he's wrong this time. Other key pilots include characters played by Luke Evans, Aaron Eckhart, and surprise movie MVP Nick Jonas. We get a glimpse of the Japanese officers as well, as they let their pride in their superior resources lead them into a fatal trap.

As with many war movies, after the initial action sequence (Pearl Harbor), much of the first half is spent getting to know the characters and much of the second half is spent in battle. The first half doesn't work because the focus bounces around too much and the characters are mostly unlikeable anyway. Skrein especially is grating to watch. Didn't Hollywood learn after he struck out as "The Transporter" that this guy shouldn't be a leading man? As for the second half, it's just a lot of incoherent flying, shooting, and exploding, complete with not-quite-convincing CGI fireballs. I'll take the movie's word for it that the Americans win (sorry if that's a spoiler), but I wouldn't have been able to tell from the action as opposed to the epilogue.

The heroes of Midway, among many other veterans, deserve to be celebrated, but with a better movie than this. Celebrate Veterans Day by seeking out a veteran and shaking their hand, not by seeing this well-intentioned but uninteresting misfire. And sorry, but I have to make the obvious joke that "Midway" is a fitting title for such a mediocre movie, if it even achieves that.

"Midway" is rated PG-13 for sequences of war violence and related images, language and smoking. Its running time is 138 minutes.