Movie Review - Once Upon a Time in Hollywood

It has been a disappointing couple of weeks. Last weekend I had to watch a contemptable reimagining of a childhood favorite in the imagination-less remake of "The Lion King." And this weekend I had to watch one of the biggest misfires in the career of one of my favorite filmmakers, Quentin Tarantino's "Once Upon a Time in Hollywood." This film is the biggest let-down since "Death Proof," Tarantino's contribution to the intentionally schlocky "Grindhouse" anthology. "Death Proof" didn't work because there was too much banal dialogue before Kurt Russell betrayed his hand as a serial killer, and this movie suffers from a similar lack of tension. 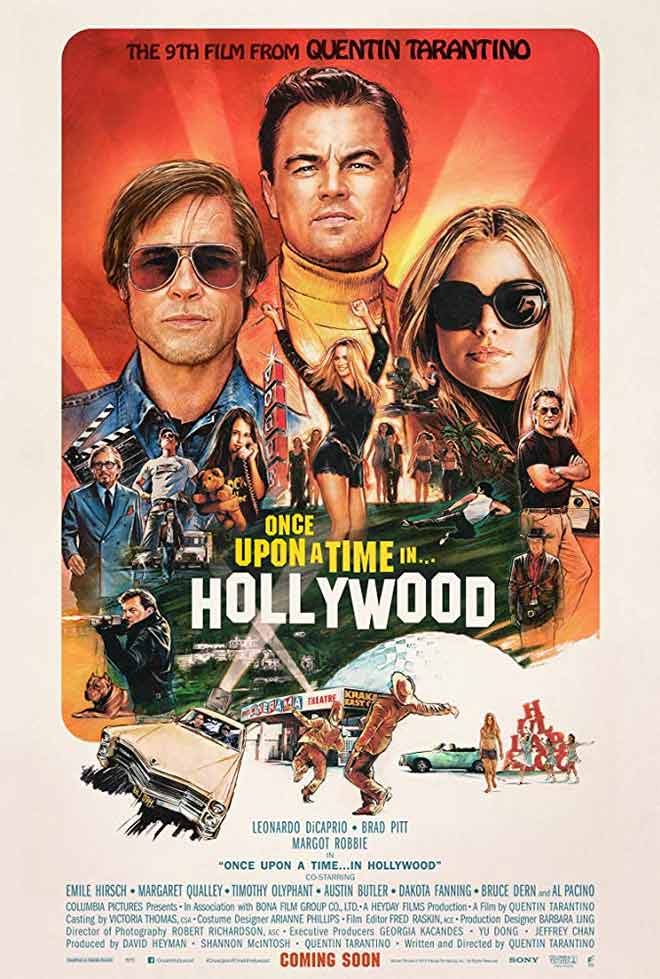 Leonardo DiCaprio and Brad Pitt star as an insecure 60's movie star and his stunt double, respectively. Rick Dalton (DiCaprio) is being asked to take guest spots on TV shows and star in spaghetti westerns, which tells him that his career is in a downward spiral. Cliff Booth (Pitt) serves as his unofficial assistant, his stuntman career stunted by rumors that he was responsible for his wife's death (the one scene we get with the wife is a lame wannabe shock, and seems out of character for Cliff since we've already seen him be patient with prima donna Rick). Also in the mix is Rick's happy-go-lucky neighbor Sharon Tate (Margot Robbie), who doesn't really have an arc, but sure seems to enjoy life.

One day, Rick struggles to appear competent on the set of a TV western while Cliff runs afoul of the Manson Family. Rick finds himself outmatched by an 8-year-old costar (Julia Butters), which leads first to intimidation, then pushes him to greatness. Cliff picks up a hitchhiking Manson Family member (Margaret Qualley, and this being a Tarantino film you better believe she puts her dirty hippie feet up on the dash), who leads him to the group's compound at the Spahn Ranch. Cliff suspects that something may be amiss with old friend George Spahn (Bruce Dern), and his distrustful nature gets him on the Family's bad side.

Six months pass, Rick and Cliff go to Italy and back, and they arrive home on the night the Manson Family is planning something horrendous. It looks like Tate and her friends may be in danger, and the same can be said of Rick and Cliff, but keep in mind that Tarantino gave World War II a very different ending in "Inglourious Basterds" so there's no reason why this movie can't end with the Manson Family defeated and everybody cooling off with a refreshing beverage.

It's in that ending with the Manson Family that we finally get some action, and the tension to go with it. Admittedly there was some of both on the Spahn farm, but aside from that the most action we get until this point were highlights of Rick's filmography and a fight between Cliff and Bruce Lee (Michael Moh) where the stakes are hardly life or death. We're drawn to other Tarantino's movies because of the way violent criminals keep their cool and conversate meaningfully with other violent criminals, even when it's possible that they could be killed at any moment. But so much of this movie is just showbiz people conversating with other showbiz people, and with a 161 minute runtime and without that trademark tension, the whole thing just seems long-winded.

I'm sure "Once Upon a Time in Hollywood" was a blast for Tarantino to film. He gets to recreate a lot of his favorite 60's institutions (party at the Playboy Mansion!) and write fan fiction with the likes of Bruce Lee and Steve McQueen. And arguably he's worked hard enough on his previous masterpieces that he's earned the right to make a sluff-off film just for himself. Just know that what you're getting is indeed a sluff-off film.

"Once Upon a Time in Hollywood" is rated R for language throughout, some strong graphic violence, drug use, and sexual references. Its running time is 161 minutes.