It's time for the latest entry into the trend of Disney live-action remakes, and this week we have a doozie. 1994's "The Lion King" is one of the most beloved and successful 2D animated movies of all time. I was 8 years old when that movie came out - right in the target demographic, not that I feel you're ever too old to love it. And love it I did, watching the film and listening to its soundtrack to my heart's content and my mom's insanity. It is a film with a special place in my heart, and now Disney wants to add to that legacy by complementing the classic with a remake using new "realistic" CGI technology. At least, that's what the goal of the remake is supposed to be. In actuality, the film is so creatively unambitious that I doubt living up to any sort of expectation was ever seriously considered. 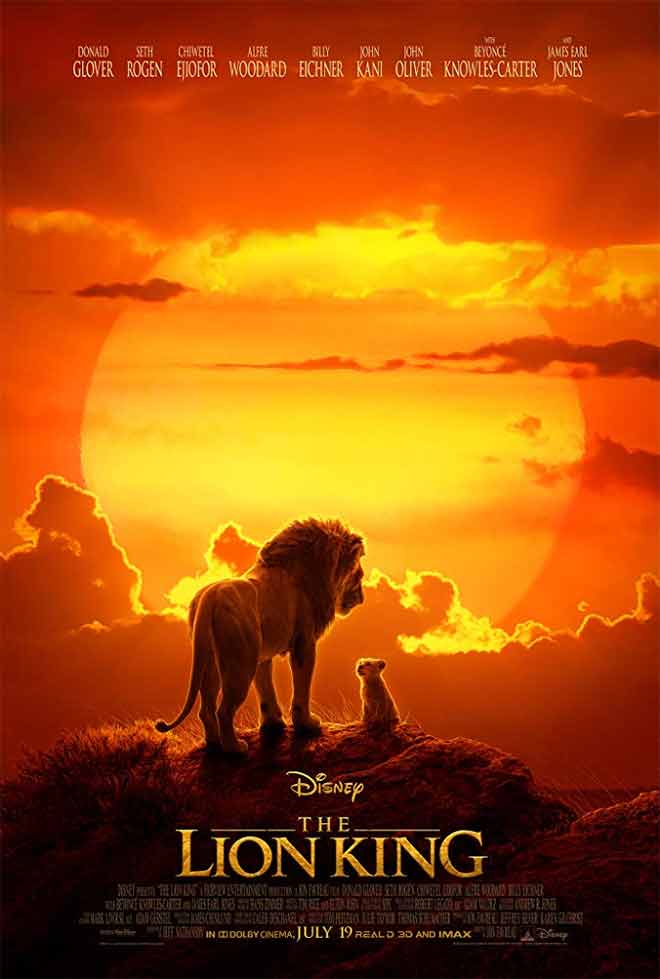 I'll give a short recap of the story, though most people know it: Young lion prince Simba (JD McCrary) looks forward to inheriting the animal kingdom from his wise father Mufasa (James Earl Jones, once again voicing the imposing patriarch). His jealous uncle Scar (Chiwetel Ejiofor) kills Mufasa and convinces Simba that he's responsible (a plot point that frankly I find a stretch in both versions) and sends him into exile where he lives a carefree life with meerkat Timon (Billy Eichner) and warthog Pumbaa (Seth Rogen). Years later, Simba (now voiced by Donald Glover) is discovered by childhood friend Nala (Beyonce Knowles-Carter), who wants him to return and reclaim the throne from the tyrannical Scar. The problem is that this would mean admitting to his role in his father's death, which would devastate his mother Sarabi (Alfre Woodard). It takes an encounter with mystic monkey Rafiki (John Kani) to convince Simba to go back and fight for the kingdom, even if it means taking responsibility for his past.

At first it looks like this movie might go well, with a lively recreation of the iconic "Circle of Life" opening admittedly nailed with the new technology. Then the characters start talking and the problems begin. To be clear, my problem is not with the talking itself, I do not share the popular opinion that the animals' talking in this movie looks phony or creepy, I actually do think the technology is "there." No, my problem is with the way the characters talk, with almost every line being a regurgitation of the 1994 script, except with less feeling. Scar, in particular seems neutered. The animated version is one of the most terrifying, charismatic presences in Disney history and this version just seems...lazy. If the plot didn't require it, I'd say he didn't want the throne that badly.

And so it goes, beat for inferior beat. About the only thing this movie does differently from a storytelling perspective is slightly expanded parts for Sarabi and Nala, with a new Beyonce song thrown in. I can appreciate this movie not wanting to waste the talents of Mrs. Carter, though the downside is that I can't help but wonder why the strong, independent Nala needs wimpy Simba to take care of wimpy Scar.

Simply put, this new "Lion King" is a movie that never should have been made. When the dialogue and action aren't being boringly repetitive, they're falling short of the original. The more "realistic" characters can't move or express themselves in the way they need to, and the voice acting isn't doing the film any favors (save for holdover Jones, Beyonce, and surprisingly, the piping youngsters). Also, there's a lot of unfunny fourth-wall breaking with Timon and Pumbaa. There's a point in the "Hakuna Matata" musical number where I think Eichner botched a cue and they just left it in the movie. Even if it was intentional, it isn't funny. I hold Disney to a higher standard than making me wonder if what I'm watching is incompetence or just a bad decision.

"The Lion King" is rated PG for sequences of violence and peril, and some thematic elements. Its running time is 118 minutes.