What a true statement. No doubt churches and charities will feel blessed when they receive a check or cash for a tenth of the $1,200.00 that people received from the United States government. Dear reader, have you shared from this surprising addition to your bank account?

Another historical happening occurred in all communities in southeast Colorado this year, was that most all or all high school graduations occurred outdoors. For Eads High School, the class of 2020 was honored in the football parking lot with two vehicles per graduate to watch them receive their diplomas. Their scholarships and awards were announced by Principal Brian Bohlander. Valedictorian Lauren Brown and Salutatorian Kaycee Ellenberger delivered outstanding speeches. After the ceremony, graduates paraded down Maine Street before lots of well-wishers before going to the Praise Community Church circle drive, where tables were set up for each graduate to receive cards and gifts. Earlier in the afternoon Mrs. Gaye Uhland's Kindergarten class donned little white robes and their mortar boards to receive their diplomas from their teacher. Thanks to Mr. Terry Riley for arranging the Crow-Luther Cultural Events Center stage and his sound system so this event could happen. This was followed by a parade led by the whirring sirens of the Sheriff's car and a big fire truck. 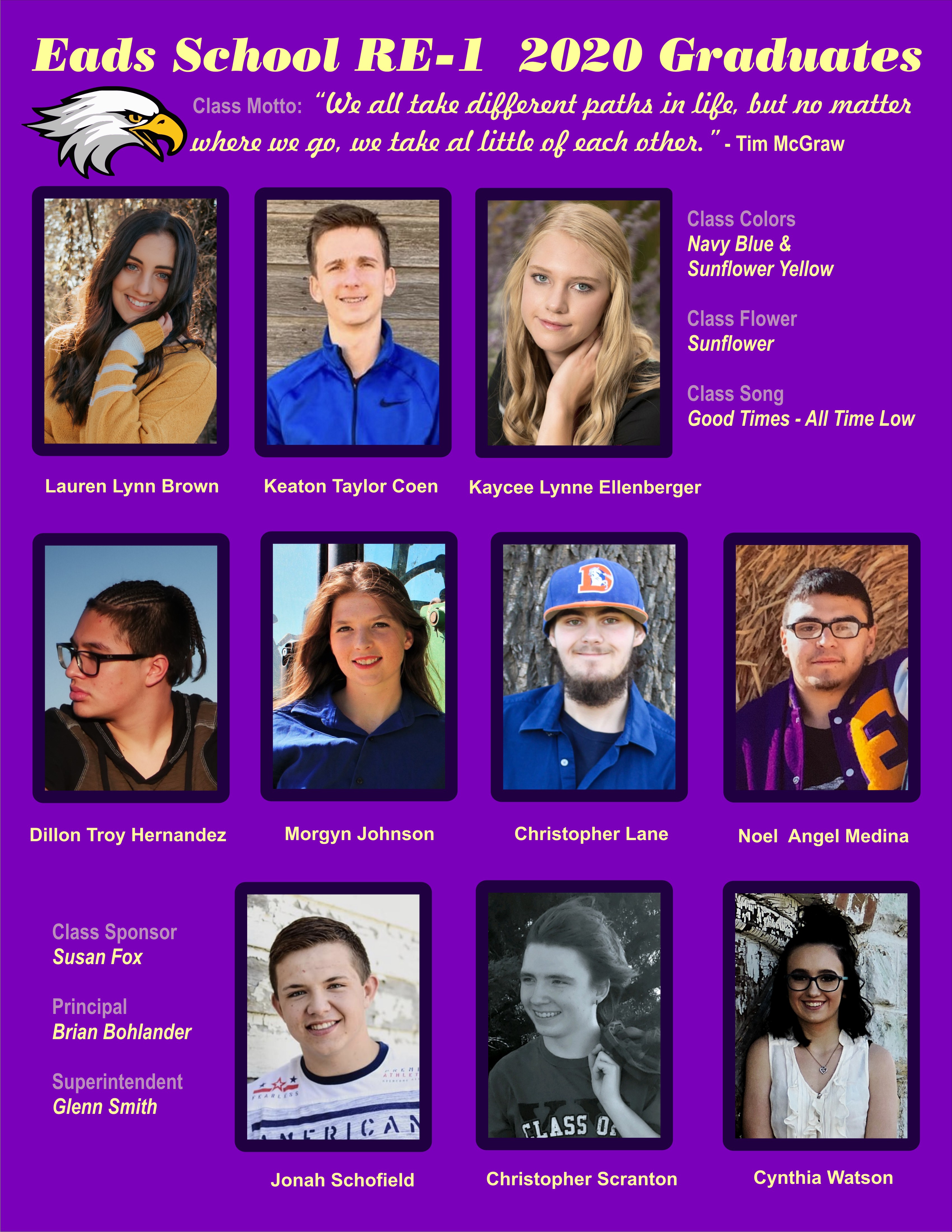 Last Saturday night, people from all walks of life converged at Jamie and Elise Crockett's ranch south of Eads for a celebration of life for their friend, Zachary Shane Gifford. Three pastors from Eads, Kit Carson, and Cheyenne Wells officiated the service. Zach's sister-in-law, Daisy Holt-Gifford's, band group provided the music. There were people there from many states and communities who were affected by Zach's life and who desired to honor the Larry and Carla Gifford family to share their concern and grief following his tragic death.

Gail and LaDonna Crawford of Eads and Dr. John and Marge Hines of Limon were happy to attend the graduation of their granddaughter, Sidney, where the graduates were seated on chairs six feet apart in the Mitchell football field. Her parents are Mike and Shelly.

The best antidote when I am tired of the news is to press the CD button and listen to the soothing piano music of our local businessman and rancher, Jimmy Brown.

The sight of waving United States of America flags in the Eads and Kit Carson cemeteries Sunday was inspiring and so pretty. It seemed that there were more flowers and wreaths than in previous years. That may be another indication of people's emotions changing after living through this ongoing pandemic episode.

Benny and Cassie Frey and children are happy to have their new home set on the foundation last week. It is located on the former Clayton and Gloria Peck home site west of Eads.

This is time of the year for branding cattle, and there have been a lot of ranchers having brandings. The local ranchers are good to help one another.

While outside the Maine Scoop Friday, an attractive young lady walked to my van and said, "Miss Less, I am Kim Kreutzer." Oh, joy for me! She was an outstanding Student Council officer who I had the pleasure to work with. She and her husband and two little boys were driving up from Houston, Texas, to Colorado. Her parents, John and Anne, live east of Haswell.

I saw it with my own eyes! A drive-in church service! When I returned from Kit Carson, I turned by the Praise Community Church and saw lots of cars in the parking lot, heard music, and saw four people on the cement entryway, so I decided to see what was happening. Terry Riley was there with his sound system. They had a church service, honored the military, and at the end, they were giving gifts and announcing their congregation's graduates, Kyton Gooden, kindergarten; Lauren Brown, senior; Kathy McCracken, Early Childhood Certification Degree; and Matt Hyman, Bachelor of Science of Occupational Health and Safety.

"Waking Up In Boston," a recent essay by Eboni Nash of Eads, certainly gives a vivid view of the effect of COVID-19 pestilence on cities. It makes one appreciate living in small town USA.

If we were not in quarantine in America, Sabrina Dawn James, Alicia James, and a few high school students would have been in Europe this week. Now they hope for a trip in 2021.

Another nice aspect of people's creativeness in this time of isolation is that a number of churches broadcast their worship services on Facebook. Last week, I saw the Sheridan Lake Bible Church service by Pastor Ernie Lambright. Burl Schuler led the hymn singing. I have said for years that "I look forward to singing with Burl in Heaven." He always added so much depth when he sang in the Eads Cantata.

We have been blessed to have Dara and Tieler Randel, Tracey and Jordyn Weeks, and Joe Brian to record Pastor Thomas Barton's sermon and service from Trinity Lutheran in Kit Carson for their sister church in Lamar and other towns.