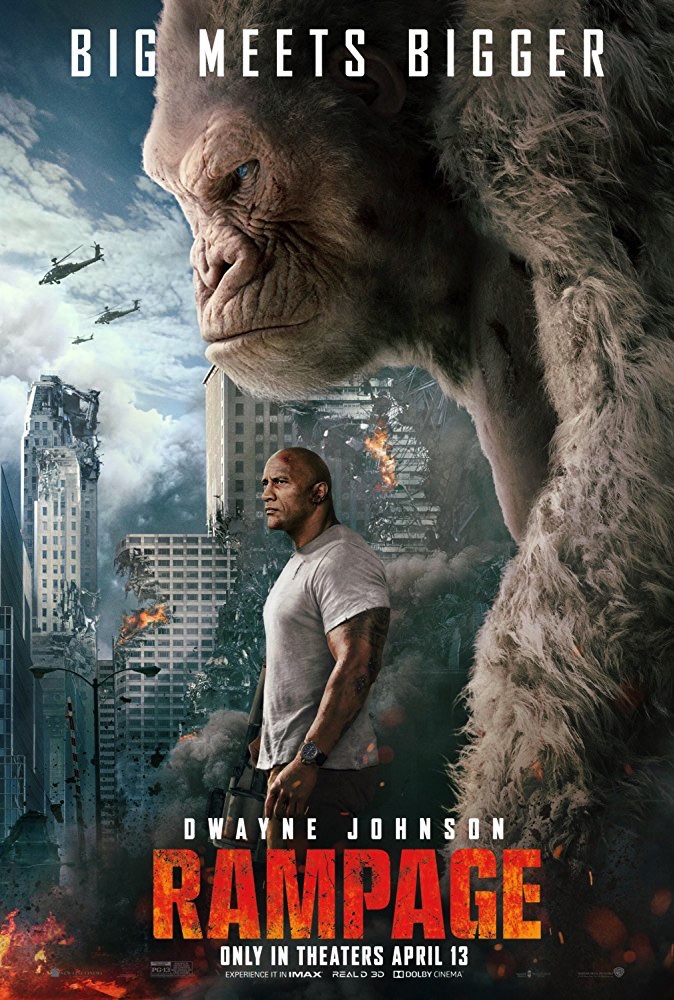 Johnson's gorilla caretaker is in charge of George, a rare albino specimen that can be ferocious when he wants to be, but usually just goofs off using sign language (Johnson taught him two obscene gestures for some reason). An exploding space station brings to Earth three canisters of genetic-modification gas. One affects a wolf in Wyoming, one affects a croc in Florida, and one affects George. Johnson tries to control his friend (his repeated calling of the name "George" can only bring to mind George of the Jungle), but the ape is growing, his temperament is worsening, and he's smashing everything in sight. Some government tranq-ing takes care of him temporarily, but it's... not to last.

Other characters include Naomie Harris as a scientist who serves as a companion for Johnson, Jeffrey Dean Morgan as a smug government agent with a drawling cowboy persona (he refers to one of the stolen helicopters as a "whirly-bird" in a moment that summarizes his character perfectly), Joe Manganiello as a mercenary put in charge of hunting the wolf, and Malin Akerman and Jake Lacy as a pair of billionaire siblings whose corporation is behind the out-of-control experiments. Akerman has the bright idea to use a powerful radio signal to draw the three creatures to the middle of Chicago. I'm sure she explains why she thinks this is a good idea, but her reasoning is lost on me because it's easy to see that it's a really, really bad idea.

The climax of the film is a whole lot of destruction. The animals all zero in on the radio signal coming from the top of a skyscraper that also houses an antidote, which is why our heroes have to be there too. Yes, the gorilla is climbing the skyscraper, and yes, the film knows what that brings to mind. The military and populace are no match for any one of the creatures, but maybe if Johnson can tap into the goodness of his old buddy George, he can get the gorilla to fight the wolf and croc and maybe the animals will take each other out. I see the problem being that the military will totally destroy George even if he wins, but the movie ends before that inevitable consequence. It does not, however, end before the city as a whole takes an incredible extended thrashing.

"Rampage" is by no means a "good" movie in the traditional sense. The acting is miles over the top, the script is a mess, and the special effects leave a lot to be desired. Not to mention that if you want anything resembling realistic action, you're out of luck to say the least. Really though, if you want realistic action, what are you doing watching a movie like "Rampage"? This is the epitome of a movie that can be a lot of fun if you turn off your brain. Johnson brings his oversized action hero charm as always, Morgan is having a blast, the bad guys are deliciously fun to hate, and the film never runs out of creative ways for the animals to wreak havoc. I can't bring myself to actually recommend the film, but I recommend it as much as I can recommend a film that I can't recommend.

"Rampage" is rated PG-13 for sequences of violence, action and destruction, brief language, and crude gestures. Its running time is 107 minutes.