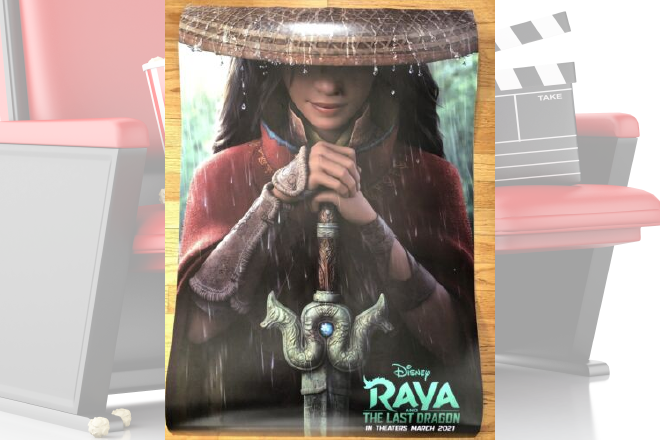 "Raya and the Last Dragon" was the first movie I saw in a New York City theater in nearly a year. No testing the waters with small-scale releases for us, we got a major Disney animated feature on the first day theaters were reopened. And I'd like to take this moment to thank the staffs of the reopening theaters for jumping into action on less than two weeks' notice to ensure a smooth moviegoing experience. While I'm at it, I want to thank the staffs of the theaters in central Pennsylvania that similarly answered the call back in August. And the staffs of other theaters at dates and places in between. And the ones yet to come. Ah, hooray for everybody! Having the theaters back has me in a celebratory mood.

The film takes place in a fictional kingdom somewhere in southeast Asia. 500 years ago, evil spirits ran amok and turned the humans of the kingdom to stone. The magical dragons of the land concentrated all their power into an orb that brought the people back and imprisoned the spirits, but it turned the dragons to stone. It has been up to one family to protect the stone ever since, a difficult task considering the once-prosperous kingdom has since splintered into five tribes that all distrust one another.

Raya (Kelly Marie Tran) is the daughter of Chief Benja (Daniel Dae Kim) of the Heart Tribe. The beginning of the film sees her pass a test that makes her the newest guardian of the orb. Her first job comes when her father invites the other four tribes for a peace summit. Raya makes the mistake of showing the orb to Namaari, the daughter of the chief of another tribe. Namaari immediately turns on Raya, and the squabble causes the orb to be broken into five pieces - one for each tribe. The shattering also releases the evil spirits that were defeated 500 years ago. They set right back to turning people into stone, including Raya's father.

After an "Avengers: Endgame"- style six year wait, Raya finally finds a dragon that can turn things around for humanity. Sisu (Awkwafina) is a big blue magical creature that comes along at about the one-third mark and injects ill-fittingly modern comedy into the movie. Somebody high-up on this movie's creative team was big fan of the genie from "Aladdin." Together Raya and Sisu travel around to the different tribes collecting pieces of the orb to reassemble. They make friends along the way, like a 10-year old restaurateur (Izaac Wang), a gruff softie barbarian (Benedict Wong), and a con-artist baby. On their tail is Namaari (Gemma Chan), determined to not let them reassemble the orb, because once people come back from being stone, they'll turn on her and her tribe for breaking the orb in the first place.

The message of the movie is a nice one about trust and non-violence. The animation is amazing as always, with lip and facial movements so realistic they'd fall into the Uncanny Valley if the animation around them wasn't so competent. The action sequences are frantic and funny, and Sisu always has some creative trick up her sleeve.

The only area where the movie lacks is in its script and dialogue. I've already mentioned the out-of-place comedy stylings of the very of-her-time Awkwafina (she's much better in serious scenes), there are also problems with low stakes (knowing that the people turned to stone can be brought back just turns the movie into a waiting game) and predictability (the movie ticks all the Disney boxes about animal sidekicks, magical quests, and lesson-learning). It turns what could have been a great Disney animated movie into an okay one. But after a year away, the big screen makes even an okay Disney movie like "Raya and the Last Dragon" seem like a great one.

"Raya and the Last Dragon" is playing in theaters and available on Disney Plus with Premier Access for $29.99 in addition to the subscription fee. The film is rated PG for some violence, action and thematic elements. Its running time is 107 minutes.