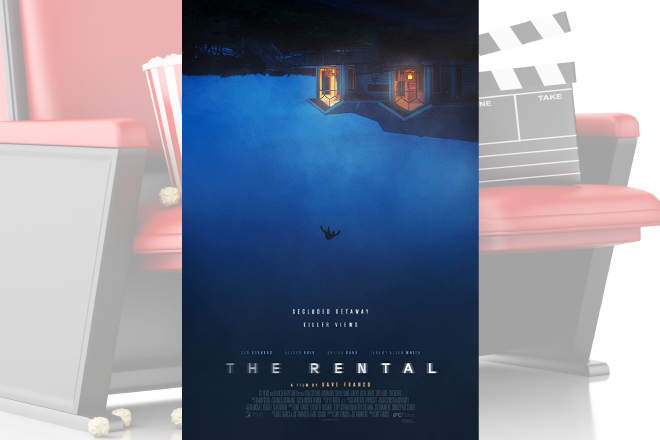 "The Rental" is a thriller set at, what else, a rental house. Rental houses like the one in this movie are essentially hotels, and horror has a long proud history with hotels. There was "Psycho" back in 1960, "The Shining" in 1980, and a season of "American Horror Story" that won Lady Gaga a Golden Globe in 2015. Then again, a rental house was also the setting for "You Should Have Left," which as of this writing is unlikely to be unseated as the Worst Movie of 2020, so the setup isn't infallible. The point is that these movies love to exploit the creepiness that comes with sleeping, showering, and living in places that are not yours.

The group of renters includes Charlie (Dan Stevens), a hotshot professional; Michelle (Alison Brie), Charlie's somewhat-marginalized wife; Josh (Jeremy Allen White), Charlie's screwup brother; and Mina (Sheila Vand), Charlie's business partner and Josh's girlfriend. Nobody is willing to say it, but both romantic relationships are on shaky ground because Charlie clearly has feelings for Mina. The characters' relationships go through some twists and turns throughout the movie, and we wonder if any of it will matter once the "be afraid of unknown domiciles" element kicks in.

The quartet rent the extravagant house, which sits on the edge of a cliff overlooking an ocean that is practically begging to swallow victims, from a creep named Taylor (Toby Huss). Taylor doesn't like dogs (Josh secretly has one in tow), barely conceals his racism, and perhaps worst of all, has a key to the house. The characters are varied in how threatened they feel by Taylor, but they are unanimous in disliking him. There is a sixth player in the game known only as The Man, which is fitting because the character has no personality, so he deserves nothing more than a vague descriptor for a name.

Drama between the four main characters takes up a lot of screen time, but it's compelling drama. If other elements didn't have to come into play eventually, this could have been a movie or stage drama unto itself. But there is a scene coming where a camera is discovered in a shower head, fatal decisions are made, and we're forced to consider the bigger picture.

At first, this isn't a bad thing. Even as tension escalates and emotions flare, there is still a tautness and understandability that I appreciated. Then the film switches subgenres and becomes a mess. A villain emerges and this person's motives and goals are nonsensical. Director Dave Franco would have you believe they are "ambiguous," as if the true terror comes from the holes you fill in with your imagination, but I say it's just sloppy writing. This point is tough to articulate without getting into spoilers, but I highly doubt that any villain that cares about Issue A is going to care much about Issue B and vice versa. Yet this villain cares about both issues and there's a redundancy to the final act that I can't overlook.

"The Rental" comes frustratingly close to getting a recommendation from me. It's definitely in the upper echelon of films I've seen this year, considering I've been on a steady diet of On Demand for the past four months. But this cast, these characters, and definitely the audience deserve a better ending than what the movie gives them. Supposedly it all plays into a moral about how travelers are too trusting of unfamiliar living spaces, but that point has been made before in better movies. Let's say you have the choice between watching this movie in theaters or watching it at home for half the cost. I'd say it's not quite worthy of first-run prices, but it might be worth a "Rental."

"The Rental" is available through online streaming services and likely through your local cable provider. The film is rated R for violence, language throughout, drug use and some sexuality. Its running time is 88 minutes.