Movie Review - You Should Have Left 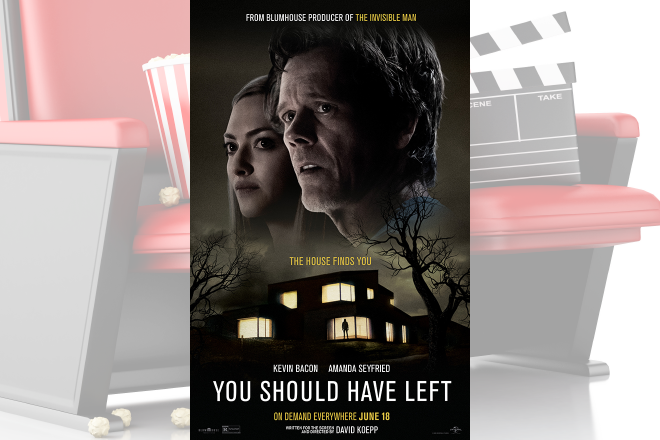 "You Should Have Left" is the latest film to "skip a planned theatrical release" and go straight to On Demand, supposedly to placate audiences stuck at home while theaters are closed. But make no mistake, this movie is not sacrificing a lucrative theatrical release for your benefit. It saw a weekend that was relatively free of new On Demand releases and it jumped in that spot so it could play to audiences in some form without any competition from better movies. If it had been released in theaters, it would have been eaten alive, though I suspect going straight to On Demand was always its destiny. Such is often the fate of uninspired garbage like this.

The movie opens with a little girl named Ella (Avery Essex) hearing noises in her bedroom. She goes through the usual steps of checking on red herrings before something surprises her. That something is a creepy man named Stetler, who wants to tell her a secret about her father Theo (Kevin Bacon). Then Ella wakes up from her nightmare, and good, it was all a dream. Then Stetler appears again, and this time Theo wakes up from a dream. Theo goes into the bathroom and curses his nightmares.

Three big problems with the opening scene: 1) Stetler is very obviously played by Kevin Bacon, to the point where I didn't know until much later that I was supposed to think he and Theo were different characters. 2) the double jump scare is cheap and illogical, since this is supposed to be Theo's nightmare. 3) Theo curses the nightmares to nobody in particular, except of course for the audience, so the movie can lazily establish that this character does in fact have nightmares.

We then get a taste of the life Theo leads with Ella and his wife Susanna (Amanda Seyfried). He's a banker accused of murdering his ex-wife, though he was acquitted. Susanna is an actress about to go on a two-month shoot in London who wants to get in a family vacation before she leaves. She and Theo settle on staying in a huge house in Wales. Strangely, each one thinks the other found the listing.

The family goes to the house and Theo starts losing his mind. He kicks out Susanna and continues to have nightmares and hallucinations about doors and hallways that aren't there. Ella has similar nightmares validating Theo's uneasy feelings, and together they figure out that something is very wrong with the house. The two get stuck in a sort of alternate dimension where they keep getting lost in the house and trying to escape only to keep looping back. If Theo wants to rescue Ella and himself, he'll have to face some personal demons, because this house in Wales is well in tune with what people did out in Los Angeles.

This movie doesn't offer up any original scares or compelling characters or drama, instead just running through a checklist of things that are expected of haunted house movies (cute kid, tortured parent, bumps in the night, prophetic locals, and of course characters not getting out of the house until it's too late). Seemingly all the energy is put into the Theo/Stetler twist, which I refuse to respect as a twist. It would still be easily guessable, but at least a step up if the alter ego wore a mask or we only saw him in silhouette. But there is no confusion that the guy is Kevin Bacon in a hat and glasses. All mystery leaves this film from the moment we see the character, and with it, any chance the movie had of being taken seriously. Don't watch this movie and realize that "You Should Have Left" a long time ago, just don't start it in the first place.

"You Should Have Left" is available On Demand through streaming services and likely through your local cable provider. The film is rated R for some violence, disturbing images, sexual content and language. Its running time is 93 minutes.