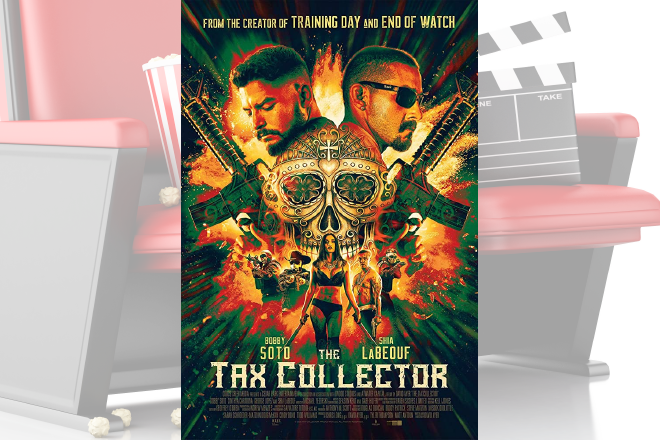 Somebody thought they had a franchise on their hands with "The Tax Collector," most likely writer/director/producer David Ayer. Ayer was once a top talent in Hollywood with works like "End of Watch" and "Fury." Then he had a huge commercial hit with the critically-panned "Suicide Squad." "Bright" for Netflix found similar success with big viewership numbers despite some of the worst reviews of the year. Now "The Tax Collector" is finding about as much success as any film can have in Summer 2020 even though reviews have been dismal. In this era I often find myself asking if the movie I'm watching On Demand would have been able to cut it in theaters. With this film I'm guessing no, but I don't feel strongly about that. I do strongly feel that it was destined to spawn several direct-to-On Demand sequels. Ayer probably thought he could get the sequels into theaters because he had the next "John Wick" on his hands, but the studio would have stepped in and marginalized the property while not abandoning it entirely. Ayer could probably successfully argue that the main character's journey isn't done with this one movie, and "The Tax Collector" is admittedly a cool name for an action franchise.

Bobby Soto stars as David, the titular "tax collector" who collects 30% of earnings from all Latino gangs in Los Angeles. He does so on behalf of his uncle Louis (George Lopez) who is running a criminal empire in place of imprisoned leader Wizard. The job can get messy, but fortunately he has the hardened Creeper (Shia LaBeouf) to back him up. Don't laugh when I say Shia LaBeouf is the tough guy in this movie, he's long past his days as a hapless protagonist. Heck, the movie should have been about his character, a white guy feared and respected in the Latin underworld. LaBeouf is certainly giving the better performance of the two billed leads, as opposed to the bland and unintimidating Soto.

David is the kind of movie criminal who lives an idyllic home life with his wife (Cinthya Carmona) and kids and promotes a strong moral code that supposedly balances out the horrific way he earns a living. Think Tony Soprano or one of the more level-headed members of the Corleone family without the internal conflict. Of course, the happy home can't last, because this movie needs David to be in avenging mode, or at least protecting mode. This will likely come at the hands of Conejo (Jose "Conejo" Martin"), a new player who wants to take over the Los Angeles gang scene despite leading shootouts himself and only having like three guards at his house for protection.

"The Tax Collector" is filled with tasteful artistry and tasteless language and violence. Ayer brings a stylistic flair to the opening titles, closing credits, and action scenes that hasn't yet worn out its welcome, but is within about one movie of doing so. I have to admit, a torture scene and a scene in a van did successfully get me to wince (though the dozens of interchangeable shootings and pointless knifeplay did not). This movie needs to thank its lucky stars for Shia LaBeouf, who could probably be doing any number of rewarding indie movies instead of playing second banana in this unoriginal tripe. Scenes of him casually exchanging dialogue with Soto in a car are actually done well, a rarity in a crime movie that isn't "Pulp Fiction." But outside of one or two elements, this is a lousy by-the-numbers thriller that takes forever for the thrills to kick in. If this does become a franchise, I look forward to skipping the sequels.

"The Tax Collector" is available On Demand through online streaming services and likely through your local cable provider. The film does not carry an MPAA rating, but it would be an R for strong violence, language, and nudity. Its running time is 95 minutes.