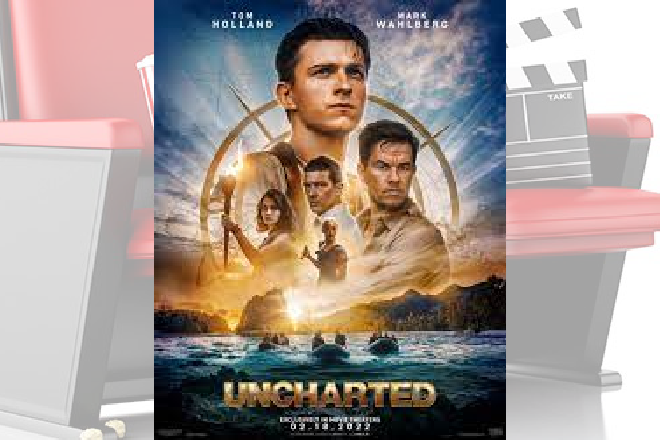 Solving puzzles is fun. Watching other people solve puzzles is less fun. Watching entire movies built around fictional characters solving puzzles (where the filmmakers have already decided whether the characters will ultimately solve the puzzles) is even less fun. It's why I could never get into those "Escape Room" movies. Frankly I'm questioning how much I'm going to enjoy Batman doing battle with The Riddler in two weeks. But I do know that I didn't have much fun at "Uncharted."

Tom Holland stars as Nathan Drake, a descendant of explorer Francis Drake, who dabbles in studying history and artifacts when he's not stealing small treasures from bar patrons. He's recruited by treasure hunter Victor Sullivan (Mark Wahlberg) to find a stash of lost gold belonging to Ferdinand Magellan. Sully was working with Nate's brother, who went missing and is presumed dead (feel free to roll your eyes at that presumption). Nate received a series of postcards from his brother, which may be a clue as to where the treasure can be found. Sully really just needs Nate for that one clue, but he also sees that the kid can be useful as a consultant, a decoy, or a temporary ally, but certainly not as a partner or a friend. Of course, there will be an arc where the two become uneasy partners and friends.

Also after the Magellan treasure is Santiago Moncada (Antonio Banderas), a wealthy banker obsessed with finding the fortune he feels is his birthright (Magellan reportedly double-crossed one of Moncada's ancestors). Moncada leads a rival search party along with henchwoman Jo Braddock (Tati Gabrielle), herself a jilted former partner of Sully's. I know the movie needs an excuse to have action sequences, but it doesn't make sense that Nate/Sully and Moncada/Jo don't just team up. Nate and Sully have all the clues and know-how, and Moncada and Jo have the resources to obtain the treasure. Also in the mix is Chloe Frazer (Sophia Ali), a clue possessor in business for herself, though she'll form temporary alliances with both sides since she's presented as a master manipulator, when in fact she has neither side's strengths. She's so out of her depth that the movie can't think of a convincing way to include her in the film's climactic action sequence.

The treasure hunt stuff is lame, the jokes are mostly unfunny, how are the action sequences? Passable. I like the idea of the cargo plane sequence from all the advertising more than I liked the sequence itself, where gravity isn't factoring in naturally as the characters climb bulky boxes hanging from strained cables. The same can be said of the climactic sequence involving two boats and two helicopters. Great idea in concept, not so much in practice with choppy editing and unnatural special effects. The film is based on a video game, and I'm sure the action works better in that setting, where everything is computer-generated, and the world can have its own rules of physics. But in live action, where the characters need to play by the same rules as the rest of us, this movie isn't pulling it off.

The opening graphics of "Uncharted" indicate that we're at the dawn of some sort of PlayStation cinematic universe, similar to Marvel's. Two mid-credits sequences indicate that we're going to get at least one sequel to this film. I'm fine with the latter, this movie has done well enough on a holiday weekend to justify a follow-up commercially, if not creatively. But the PlayStation people are getting way ahead of themselves if they think they can do what Marvel is doing. Just because they have Tom Holland doesn't mean they have Spider-Man. Though shooting and swinging from webs makes more sense than some of the climbing in this movie.

"Uncharted" is rated PG-13 for violence/action and language. Its running time is 116 minutes.