Throughout the year, we've read stories about how more than half of American have less than $1,000 saved to use in an emergency. Chances are you are among those people, and there is hope to make a change.

What is an emergency? 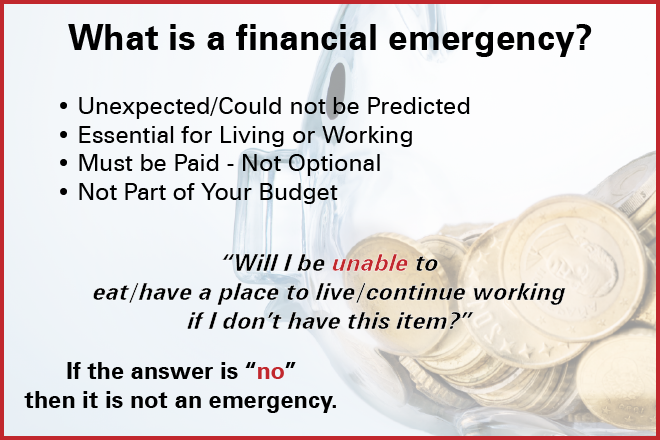 Everyone may have a different definition, but it might help to think of it as an unexpected bill for something essential that must be paid from money beyond what you usually reserve for regular expenses. It isn't for something you simply want, it's for something you must have in order to live or work. The latest smart phone probably isn't an emergency. A new water heater to replace one that suddenly failed probably is. If you ask yourself, "will I be unable to eat/have a home/keep my job if I don't have this?" and the answer is "no," it isn't an emergency.

While most of the articles bemoan Americans' lack of emergency savings, few offer any tips to actually start an emergency fund.

For most, no matter what their income, $1,000 can seem like an impossible number to reach. The important thing is to take the first step and set aside any amount for your emergency fund. The second step is to make it a habit to set aside money you won't touch unless a real emergency happens.

Save a Little More Each Week 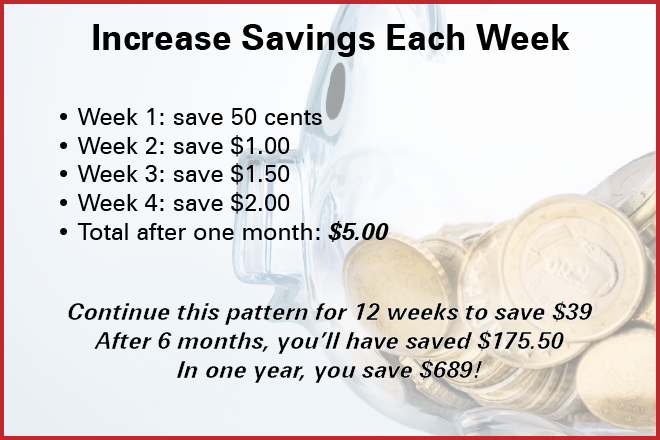 You can ease into building your fund. Setting aside 50 cents one week, and increasing that by 50 cents each week after, will give you $5 after a month. Maybe that doesn't seem like much, but if you follow that pattern for six months, you'll have $175.50, After a year, your savings will add up to $689. Not bad, though during the four weeks of month 12, you'll be setting aside $101. Ouch! - especially if you start saving for your emergency fund in January. Month 12 comes during the holiday gift-giving season, which can make saving stressful. Tips for managing holiday gift expenses were covered in a previous column.

Another approach is to choose a target amount to save through the year, and divide it evenly by the month or week. Think you can save $250 for the year? That's about $20.83 per month, or $4.81 per week. If that is manageable, consider stretching to $25 per month, or $5 per week to give yourself between $260 and $300 a year later.

Still think saving is too difficult? Find ways small ways to reward yourself. Set a goal to consistently follow your saving schedule for some amount of time - maybe three or six months. When you reach the goal, use a small amount like $5 or $10 to reward yourself, and start on your next goal. Sometimes it helps to set both your goal and the reward you want at the same time to give yourself extra incentive.

If you miss one of your weekly or monthly savings amounts, don't give up! If you can, make up the amount missed. If not, just remember to save the next amount to put yourself back on track. The missed amount is a bump in the road, not an excuse to stop saving.

No matter how you approach setting aside money for your emergency savings, the keys are to start saving, save regularly, and don't touch the money you've been setting aside unless a real emergency strikes.