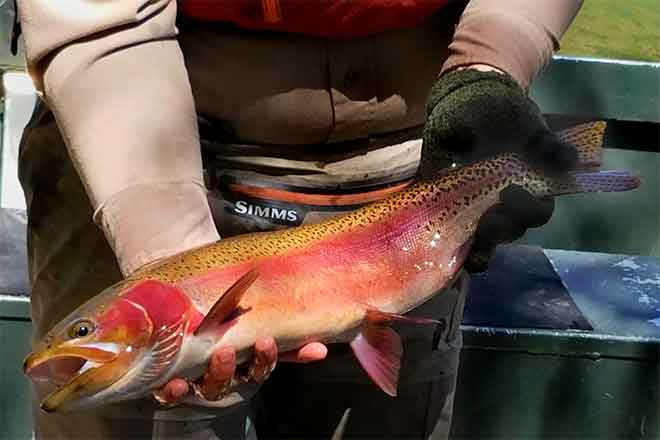 A recent survey by Colorado Parks and Wildlife biologists found rainbow trout thriving in the Arkansas River near Salida offering a hopeful sign for wildlife conservation efforts aimed at overcoming whirling disease, which decimated trout populations in Colorado after its discovery in the 1980s.

These are special rainbows; they are the spawn of wild rainbows from the Gunnison River that are resistant to the deadly whirling disease. The disease is caused by a parasite that infects rainbows, leaving them deformed and swimming in circles before it quickly kills the youngest fish. 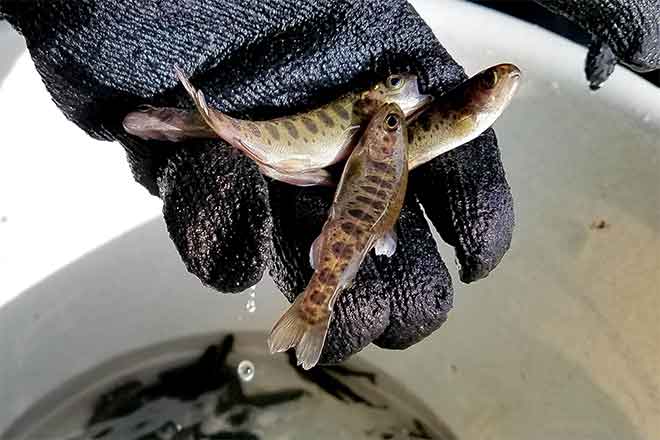 Three rainbow trout, offspring of Gunnison River rainbows, are shown last February in the Mount Ouray Hatchery in Salida. With help from the Collegiate Peaks Chapter of Trout Unlimited volunteers, CPW snipped the left pelvic fins from 40,000 Gunnison River rainbows, each around 3 inches long, to prepare them for stocking in the Arkansas River. A November survey found some of the fish had grown 10 inches. Photo courtesy Colorado Parks and Wildlife / Bill Vogrin

The effort included spending more than $13 million to clean up infected hatcheries and convert them to spring- and well-water rather than surface water sources.

A breakthrough came in recent years when CPW biologists verified that a population of wild rainbows in the Gunnison River with resistance to whirling disease were reproducing on their own. CPW staff has begun spawning and raising so-called GRR trout (for Gunnison River Rainbows) and stocking them around the state. In March 2017, CPW began stocking them in the Arkansas, east of Salida.

With help from the Collegiate Peaks Chapter of Trout Unlimited volunteers, CPW snipped the left pelvic fins from 40,000 GRRs, each around 3 inches long, to prepare them for stocking. The clipped fins make it possible to identify them in later years when they are caught in the river.

"This year, the largest GRRs that we sampled were 131/2 inches long," Atwood said. "It only took 21/2  years in the Arkansas River for some of the GRRs to grow 10 inches in length! That is impressive and encouraging.

"The Gunnison River rainbows actually thrive and grow faster in the river than they do in the hatchery under controlled conditions, a hopeful indicator of how well-suited they are to the Arkansas River." 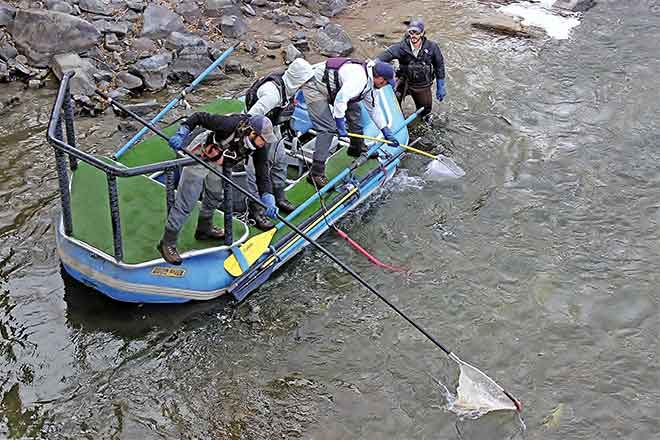 In November 2018, a CPW team used electroshock equipment to survey the Arkansas River for rainbow trout missing their left pelvic fins, identifying them as descendants of Gunnison River rainbows and resistant to whirling disease. Photo courtesy the Mountain Mail in Salida / Cody Olivas.

The next milestone in the GRR stocking project will be evidence they are naturally reproducing in the Arkansas.

"We have GRRs in the Arkansas that will be sexually mature next spring," Atwood said. "We hope to see signs of natural reproduction."

Atwood cautioned against getting overly excited about the discovery.

"We suspect it will take a couple more years before we can say anything definitive about the success of GRRs in the Arkansas," Atwood said. "But it sure is encouraging to see good GRR survival and growth for these first two years. I have optimism about the future."

Restoring to the Arkansas and other Colorado streams a wild, naturally reproducing rainbow trout that is resistant to whirling disease would be a huge wildlife conservation victory for CPW.

"CPW has been trying to create a wild reproducing population of rainbow trout in the Arkansas and other major Colorado rivers for decades," said Josh Nehring, senior aquatic biologist in CPW's Southeast Region. "There have been several obstacles in the Arkansas River including competition with brown trout, river flows and whirling disease, which is present in the river.

"These Gunnison River rainbows have shown resistance to the disease. This would be a big breakthrough if this project succeeds."

CPW biologists will stock more GRRs in up and down the Arkansas starting next spring in hopes of expanding the rainbow population throughout the river basin.

Meanwhile, the CPW hatchery staff in Glenwood Springs has developed a broodstock and the first captive spawn of those fish is planned this spring, which will provide higher numbers of GRR to stock statewide.