Editor's note: this week is Severe Weather Awareness Week in Colorado. Each day, KiowaCountyPress.net is bringing you information from the National Weather Service about spring weather dangers. Monday's article can be found here.

This is Colorado Severe Weather Awareness Week, a time when the National Weather Service reminds you of the hazards associated with thunderstorms. Today's topic is tornadoes.

Colorado is no stranger to tornadoes. In fact, 10 years ago on May 22, 2008, a powerful tornado, rated an EF-3 on the Enhanced Fujita scale, moved through portions of northern Colorado. The tornado cut through Windsor, Colorado, on its 39-mile path, leaving behind a path of destruction, at least 78 injuries, and one fatality. Damage estimates exceeded $100 million from this tornado. Just over a year before the Windsor tornado, another EF-3 tornado tore through Holly, Colorado, causing extensive damage and killed two people.

While large tornadoes are not as common along the Colorado Front Range as they are across the Eastern Plains, they are possible given the right conditions. The location was not the only oddity with this significant tornado; the tornado moved from southeast to northwest. Only a small minority of all tornadoes move northwest. Also, the tornado formed just before noon, well before the usual time frame when tornadoes are most common. Tornadoes typically form during the afternoon to early evening hours across Colorado. 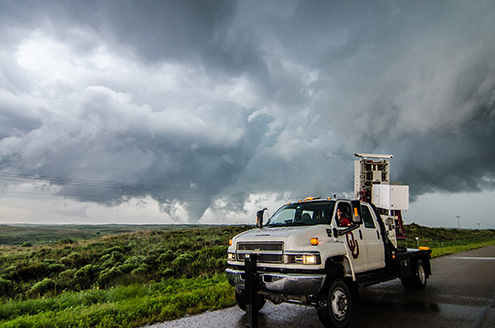 The tornado threat in Colorado increases rapidly in May and continues through August. Ninety percent of Colorado tornadoes occur during this four-month period, but tornadoes have been reported as early as February and as late as November.

Tornadoes have occurred in most areas of the state, but historically 95% of tornadoes occur along and east of Interstate 25 where heat and moisture in the lower atmosphere are often more abundant. Tornadoes can occur at every hour of the day, but most occur between 1pm and 8pm.

An easy phrase to remember for tornado safety is to Get In, Get Down, and Cover Up. Get inside a sturdy building, get down to the lowest floor or most interior room, and cover your head.

The best option for tornado safety is to be inside a well-built structure within a basement, safe room or underground storm shelter. If none of these options are available, move to a hallway or a small interior room on the lowest floor such as a closet or bathroom. A room without windows is best. Cover yourself with blankets or get under a sturdy piece of furniture because the greatest risk of injury from tornadoes is from flying debris and structural collapse.

Abandon modular homes and mobile homes as they offer little to no protection from tornadoes. Most tornadoes can destroy even tied-down mobile homes. Approximately 50 percent of all tornado fatalities are the result of people sheltering in a mobile home. If a tornado approaches, seek safety in a nearby building or storm shelter. A neighbor or family member's house, a community storm shelter, or other local buildings all provide better shelter. Remember to get out!

If you are driving in open country and see a tornado, do not try to outrun a tornado as tornadoes can move up to 60 miles per hour. Instead, simply drive away from the tornado path at a right angle if time permits. Do not take shelter beneath a highway overpass.

these are poor, last-minute options; the worst place to be when a tornado threatens is outside in the midst of flying debris. Heavy rain can also produce flash flooding, putting you in further danger when taking shelter in a culvert or ditch.

You can get the latest weather forecasts and severe weather watches and warnings from a local NOAA All-Hazards Weather Radio station, your local radio or TV stations, your cell phones, and on the Internet at weather.gov.

If a tornado threatens your location, remember to get in, get down, and cover up!

Check back tomorrow to read the next article in this week's series and remember to stop by 1208 Maine Street in Eads to register to win one of three weather radios being given away by KiowaCountyPress.net and Plains Network Services. Entries close at 4:00 p.m. Friday, April 27, 2018.