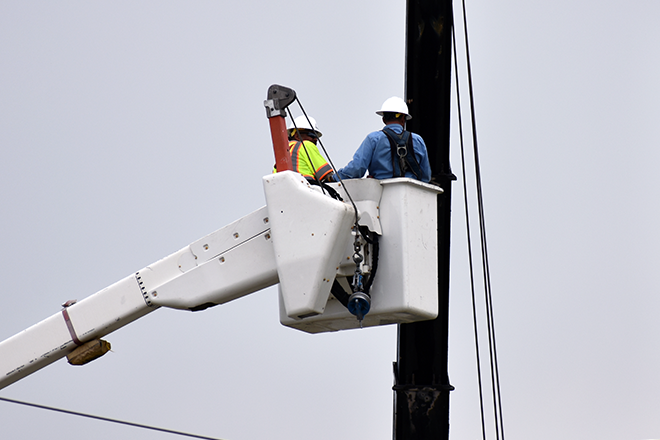 (The Center Square) - Texas Governor Greg Abbott is calling on the Texas Legislature to introduce legislation and authorize funding to winterize the state's power system after widespread power failures.

Abbott previously called on the Legislature to reform and investigate the Electric Reliability Council of Texas (ERCOT) to ensure that Texans never again experience power outages on the scale they have seen over the past several days.

He also spoke with President Joe Biden Friday and with leaders in various industries to determine the best course of action going forward.

Biden reiterated in his call with the governor that the federal government "will continue to work hand-in-hand with state and local authorities in Texas to bring relief and address the critical needs of the families affected."

Biden said he would instruct federal agencies "to look into any immediate steps that could be taken to support Texans at this time," the White House said, adding that the administration "was at the ready should the State of Texas or any other impacted region need additional federal disaster support or assistance as severe storms move across the U.S."

On Sunday, the White House granted Abbott's request for a Federal Emergency Declaration -- which includes Individual Assistance, Public Assistance, and the Hazard Mitigation Grant Program to help eligible Texans apply for assistance for broken pipes and related property damage. The declaration authorizes FEMA to provide emergency protective measures for mass care and sheltering and Direct Federal Assistance for all 254 counties in Texas.

Power has been restored to nearly 2 million homes across Texas since Wednesday. There are no more power outages due to a lack of generation.

Every available repair truck in Texas has been dispatched to address downed power lines that are causing continued outages.

On Friday, the governor held separate calls with the Texas State Board of Plumbing Examiners (TSBPE) and with members of oil and gas refinery organizations to discuss ongoing efforts to assist Texans and the removal of administrative barriers in addition to needed changes in the industries.

The governor held calls with power and water providers on Thursday to develop strategies for increasing access to additional power and restore water and expedite additional clean water in communities across the state. Some households in Houston received water on Thursday for the first time in four days.

State agencies are working to distribute food, water, generators, and additional supplies to Texas communities. The Texas Commission on Environmental Quality (TCEQ) is working with water quality labs to ensure the safety of drinking water.

"The past several days have been beyond challenging, but with every passing hour we are restoring power and water for families across Texas," Gov. Abbott said in a news release. "We are doing all we can to make it through this challenge, and the state continues to deploy resources and personnel throughout the state." Thanking all of the men and women working around the clock he added that "Texans should continue to take proper precautions and follow local guidance to stay safe and warm."

The governor also requested a USDA disaster designation for Cameron, Hidalgo, and Willacy counties to allow them to be eligible for federal assistance, like providing emergency loans for agricultural producers who have suffered losses in designated counties, as well as in counties that are contiguous to a designated county.

"Texas agricultural producers continue to be greatly affected by the severe ice and freezing temperatures; these weather conditions have substantially affected producers and caused severe production losses," the governor's request states. "These producers are in need of USDA assistance to return to normal operations.

Early estimates made by Texas Citrus Mutual indicate that Texas citrus sustained approximately $305 million in losses to the crop in the three counties.

Abbott also ordered natural gas producers to not export product out of state until February 21 and instead sell it to providers within Texas.

He also waived regulations to allow commercial drivers and plumbers who otherwise might not be able to assist to help in emergency relief efforts.

In a Friday afternoon news conference, Abbott said the state was prioritizing continuing to restore power to Texas homes.

Downed lines or the need for manual reconnection are the reasons why some are still left without power, he said.