While the official start of winter is just a week away, Colorado's eastern plains are facing strong winds and high fire danger Tuesday and Wednesday.

A red flag warning will be in effect from 10:00 a.m. to 6:00 p.m. Tuesday for Kiowa, Bent, Prowers, Baca, and eastern Las Animas counties. Winds up to 40 miles per hour are expected while relative humidity dips to 15 percent according to the National Weather Service. Temperatures in the area are predicted to reach the mid-60s. 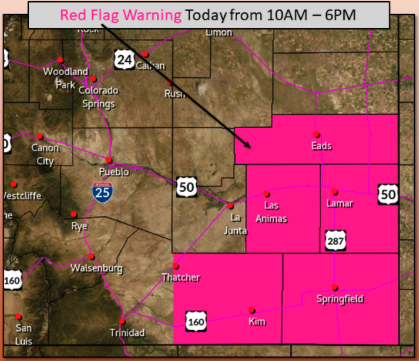 A high wind warning will also be in effect starting at 8:00 a.m. Wednesday and is expected to continue until 5:00 p.m. Wind gusts could be as high as 80 mph across most of Colorado's eastern plains. Blowing dust is likely, potentially creating dangerous travel conditions as visibility is reduced to less than one-fourth mile at times. Travel along north-south highways, such as Interstate 25, is expected to be hazardous, particularly for light weight and high-profile vehicles.

Mountain areas can expect snow to accompany the strong winds Wednesday. The San Juan Mountains could see rates as high as 3-4 inches per hour, and accumulation of a foot or more of new snow. In the Sangre de Cristo range, 2-5 inches of snow is possible.