2019 Fall forecast for the United States 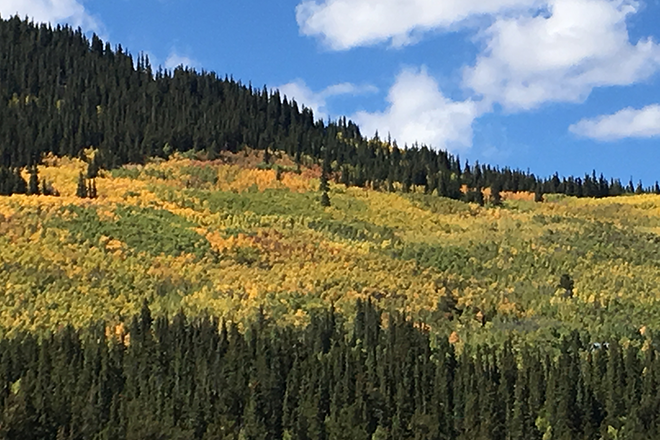 As the fall season gets underway, warm weather is set to continue across the Northeast and mid-Atlantic.

In the Southeast, residents will need to remain on alert for tropical impacts, while the southern Plains braces for a second severe weather season.

Meanwhile, Santa Ana winds will threaten to bolster the fire threat across Central and Southern California. 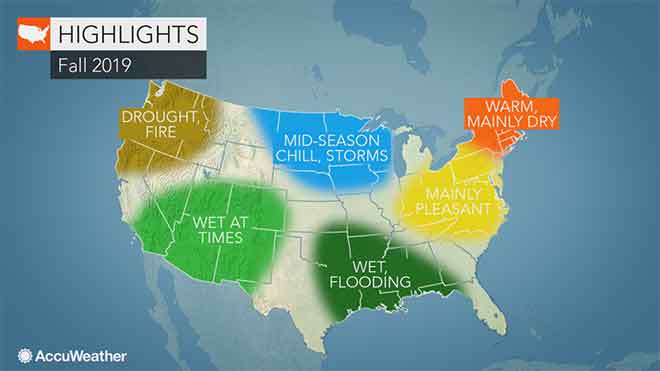 Warm weather to continue in the Northeast and mid-Atlantic

After several rounds of heat this summer, warm weather is predicted to stick around across much of the Northeast and mid-Atlantic this September.

AccuWeather Expert Long-Range Forecaster Paul Pastelok said, "There are probably going to be people at the beaches for a longer duration this year compared to other years."

The persistent warmth may lead to a delayed foliage season in the Northeast - though, generally, a vibrant display is predicted, thanks in part to dryness anticipated before the turn of the leaves.

Pastelok said, "Barring any major wind events, the best displays are going to end up being in the mid-Atlantic states, shifting over to the Ohio Valley and a little bit in the Northeast as well."

By October, a cooldown will be noticeable across much of the Northeast and Great Lakes, but it won't signal any early wintry conditions for the regions.

He said, "I think the highest elevations of the Northeast will have the best chances for autumn snow as we get into mid-season, but I think we're going to be waiting a long time for significant snow that's going to stick."

The Southeast and Gulf states will remain on alert for a tropical impact into the autumn, with forecasters predicting as many as two to three more impacts for the United States.

"We're looking at the Southeast for impacts. Florida is more vulnerable at this point, but you don't really know until you get close to that time period where storms are going to evolve and where they're going to head," he said.

If a tropical impact fails to materialize, the Carolinas and parts of Georgia are at risk for moderate drought conditions from the fall into the winter season.

Come the middle of fall, the region is likely to experience a cooldown, signaling an end to the summery weather.

But as late October and November roll around, residents will need to keep an eye out for a second severe weather season.

"It doesn't look like it's going to be an exceptional one, but it does look vulnerable along the Gulf Coast, as you get into the latter part of the season." Pastelok said.

After warmth lingers into September across the central and northern Plains and the Midwest, a surge of cold air will arrive in late September or October.

Cold snaps, with the possibility for an early frost and freeze, are a concern into the middle of the season, Pastelok said.

He said, "An early frost area to watch is probably Kansas, Nebraska and northwestern Missouri."

However, the transition will be more dramatic father north.

Pastelok added, "Farther north, we're talking a transition that could go from rather mild weather to some snow lying on the ground by mid-season."

Active weather pattern in store for the southern Plains

A generally active weather pattern is in store for the southern Plains this autumn.

"We are calling for near-normal number of severe weather events for the late-severe weather season, but it may be most active along the Gulf coast and central Plains during the period," Pastelok said.

The ArkLaTex should also be prepared for the possibility of flooding.

Temperatures will average near normal for the season as a whole, but residents can expect a milder autumn than last year.

The Southwest monsoon is forecast to end on time in September, but a dry remainder of the fall season is not in the cards.

Across the region, one or two flooding events are possible, as tropical moisture is pulled in from the eastern Pacific Ocean.

Potential Santa Ana winds may kick up on occasion and spark new fires over parts of Central and Southern California.

Mid- to late season, a more active weather pattern will allow some strong systems to move on shore, potentially bringing early snow to the mountains and above-normal rainfall to the valleys in California.

Above-normal warmth to continue across much of the Northwest

Across much of the Northwest, above-normal temperatures will continue into the fall season.

The Pacific Northwest to east of the Cascades will get the worst of the heat and dryness, Pastelok said, particularly in the beginning of the season.

This will add to the wildfire risk for these regions.

"But farther east, across parts of Montana and Wyoming, I think they could get some moisture and a cooldown," he added.

The conditions will limit the vibrancy of the fall foliage in these areas, leading to a "spotty" season at best.

Late into the fall, the return of a more active storm track may promote heavy rain and even snow in drier parts of the Golden State.

"The drought may erase pretty quickly in Northern California if this happens," Pastelok said.