"A generous person will prosper," Proverbs 11:25

The annual meeting of the Eads Consumers Supply Company last Thursday was certainly the highlight of the week for most people who attended. Jeff and Teri Salisbury prepared the prime rib, which was cut in huge thick slices that covered the china plates that Mandy Adamson and Larry Michael washed and dried before the dinner. Carrie R. Neal peeled and made 30 pounds of mashed potatoes served with vegetables and side dishes of salads and an array of desserts brought by the guests. Board President Mike Weirich presided over the meeting and gave a report. Manager Mandy Adamson provided a printed financial report that showed a remarkable increase in profit. Mr. Weirich stated that he will be retiring next year. He invited men and women who want to run for the board to talk to him or a board member to indicate their interest next year in the spring. Other board members who spoke during the meeting were Randy Carney, Barry Koch, and Jeff Salisbury. They introduced all the employees and thanked them for their service. Employee Raelynn Riley gave a presentation with sweet treats complimenting the qualities that the employees like about their manager, Mandy Adamson, for her work above and beyond, and an appreciation plaque for her leadership.

Gilly and Barbara (Durrett) Armstrong of Evans, Colorado, were present and proud of their granddaughter, Bree, when she graduated as a Second Lieutenant at the United States Air Force Academy. President Donald Trump spoke at the Academy graduation Thursday and shook over 1,000 graduates' hands because he wanted to do so. He was very gracious in pointing out accomplishments by many graduates. That reminded me of our former Principal Betsy (Legg) Barnett. Families and people always felt so good when they left the graduation ceremonies because she always found a positive quality to share about each graduate. I count that as part of the legacy she has left us.

Pansy Foxworthy's 103rd birthday party at Weisbrod was great, with lots of relatives and friends there to enjoy cake and ice cream. Among the guest there were five generations that included Pansy, her son, Dee, and Gloria, their son, his daughter-in-law and little daughter who was the life of the party in her joy of the balloons, flowers, and cake and ice cream. Her daughter-in-law, Karen, and granddaughter, Sheila, also came from Kansas City, Missouri. 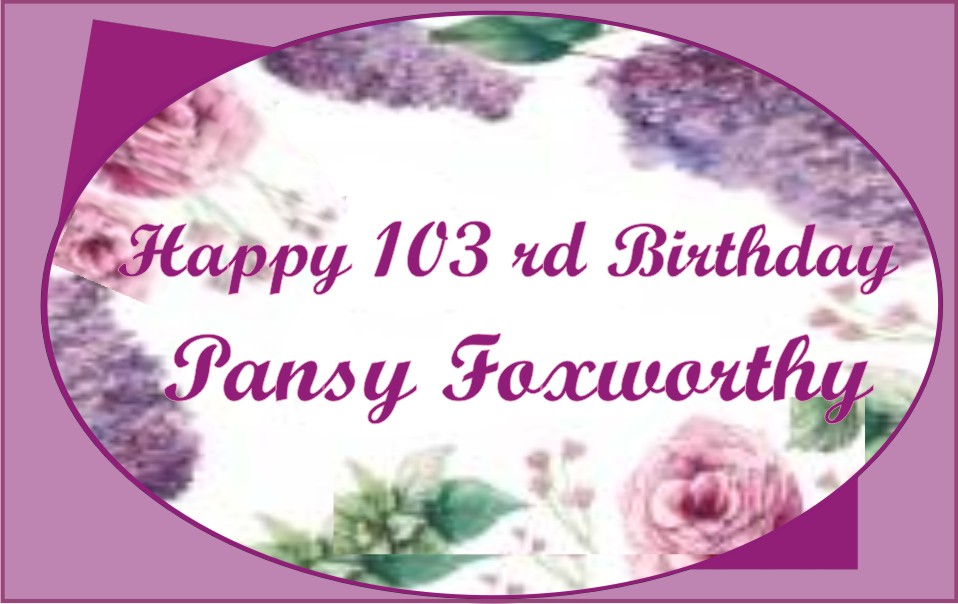 Plans are being made for the Maine Street Bash July 27 where the CLCEC Board may be expanding the spaces to the parks to include more vendors, flea market type sales, and game entertainment. If you have questions or ideas, a person could talk to one of the board members.

There was a memorial service for L.G. Vanderwork, 94, who had been a resident of Eads and Towner most of his life after moving to Kiowa County from Kansas. The good ladies of the United Methodist Church served a noon lunch for the family and friends. L.G.'s occupation was mostly farming and trucking, and caring for his family.

Marisa L. Dixon graduated from Hays State University in Fort Hays, Kansas, with a Master's of Science Degree in Sports Administration. Since March she has been working in Columbus, Nebraska, for the YMCA, where she is the Aquatics Administrator. Her parents, Mike and Shannon Dixon of Eads, and grandparents, Jack and Honeybelle Dixon of Eads, and her brother, Dylan, of Hays, attended her graduation.

The Eads Riding Club hosted their monthly event at the fairgrounds last Saturday. We had a good lunch at the 4-H concession stand where Tim and Gloria and Hailee Trosper were serving a great "homemade" lunch. Later we saw Amanda and Ross Brown go in to help them. There were many pickups with trailers, and cowboys and cowgirls there having a good time.

There was a baby shower for Ryker Lenox Saturday at the Cobblestone Inn. Justin's mother, Nikki Lenox, has been an excited grandmother about the birth of Justin's baby boy.

The high school volleyball team members are taking turns serving evening treats and meals in the baseball concession stand. Here is a place a lot of people buy their evening meal, which helps the team and saves the parent time in the kitchen.

The Future Business Leaders of America group is having a bake sale June 7 to help fund their trip to national competitions in San Antonio, Texas. The cheerleaders will have a car wash near an Eads park June 8.

A hearty congratulations goes to Eads young lady athletes who broke a school record and, most of all, who won the Colorado State Championship at the state track meet by running the 4 x l00 relay. They are Ally Spady, Kaycee Ellenberger, Brookynn Jones, and Kaylee Wilson.

Readers: "Love isn't Love till you give it away." Tell someone you love them.