Homecoming day began cold and so windy, but by evening it was a lovely night on the best groomed football field in eastern Colorado for the football games. Thank you, Darryl Adamson and Bobby Rittgers. The Eads football team charged on to the field bearing the United States, Eads High School and Wiley school flags, and won the game with the Walsh Eagles. At halftime, announcer Betsy Barnett gave the news that the junior class won the "Class with Class" banner following a week of hilarious "dress days," rally skits, stunning gym wall decorations, and cheers. The homecoming court assembled to crown Ross Brown and Rhealie Rittgers king and queen. Their court included Juniors, Taygen Ferris and Caleb Lane; sophomores, Nathan Lowe and Brianna Wilson-Scranton; and freshmen, Kierra Coen and Kaiden Dunlap. Crown bearers were young Luke Barnett and Miranda Kepler. The school staff and student body thanked the three event judges, Marty Miller, Allison Buck, and Sarah Eikenberg, as well as Student Council officers Rhealie Rittgers, Cade McDowell, Brianna Wilson-Scranton, and Kaiden Dunlap. The cheerleaders are Katherine Trosper, Andrew Grant, Zoe Arnold-Kraft and Brianna Wilson-Scranton. The fire department built and lit the great bonfire, and the Booster Club decorated the field wonderfully with balloons and streamers, as well as a special bench in honor of Wiley at the volleyball games. Thursday morning, the whole school, preschool to seniors, had their group photo taken on the football field. These are fond memories for kids and families. Please tell them daily that you love them.

Last week, was a week of sorrow and mourning for many people in southeast Colorado following the deaths of four teenagers from Wiley school, who died in a highway crash that is about 27 miles from Eads. For Kit Carson friends, the funeral visitation for Mike Morlan was in Lamar Sunday and Monday was the funeral. He had worked at Wiley School for 30 years. During the week, there were the four funerals, and then Friday, the news came that the fifth teenager died, as well as one of the truck drivers, who was in the sleeping cab. From here on, let us all follow the laws for passengers of teenagers. 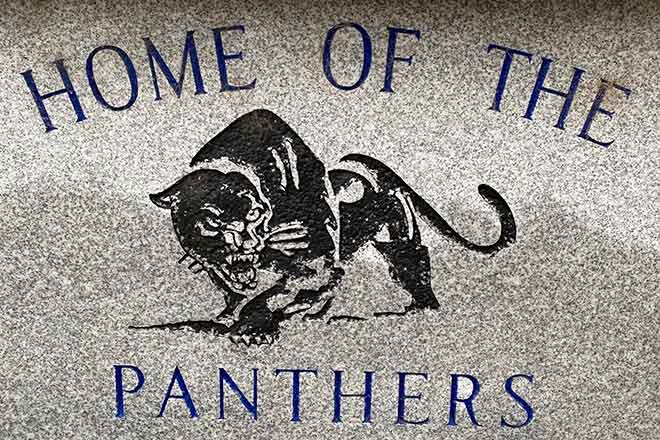 Billy Brandt, of Pueblo, spent many hours painting a large mural of a smoking locomotive and buffalos on the north side of Treasure Shop on Highway 287. It is an awesome sight!

Parade watchers were disappointed to see fewer classic cars. It may be for lack of a volunteer organizers. I hope I caught a photo of Bill Woelk's 1937 Ford that he bought and restored from Hank Troue of Kit Carson, and Charlie Crow in his pretty teal convertible! Cardon and Joyce Berry's collection of restored autos is always a hit with people! 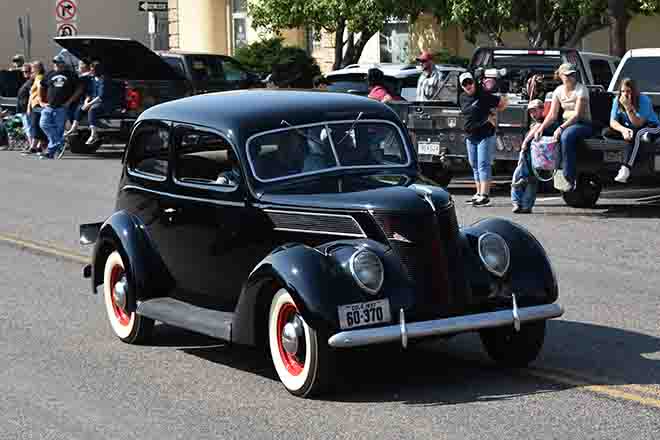 Robin Fox called for me to clarify the titles of the county rodeo royalty. The queen is Kiya Leonard, with Braya Ferris as princess, Selina Fehr as first attendant to princess, Braxtyn Ferris as prince, and Aiden Hose is squire. Best wishes to these young people and parents as they represent Kiowa County!

Polly (Collins) Johnson called from Cheyenne Manor to leave a message about the about 1922 Model A vehicle that is used each year in the Kit Carson Day parade to transport the "Good Scout" for that year. Her father, Don Collins, bought it for about $30 in about 1926 from Mr. Syb Childers, who lived on the Collins ranch near Rush Creek. Ever since the 1939 Smokey Hill celebration, either Walt Steiner or his grandson, Jeremy Gaynor, has tuned it up for a parade. Polly said reading about the car stirred up her memories. For years, I have thought of Polly as the "prairie princess" after I saw and heard how kindly she was to the local cowboys and ranchers.

Terri Aldridge Patterson has brought more beauty to Eads, where she has shared her years of landscaping and design skills to several local yards. I have seen local handy man, Brian Kauffman, help her work wonders with our neighbor's yard, the O'Brain's, and at Keith and Jennifer Crow's yard.

There was a large group of folks who attended the noon Eads senior citizens' lunch last Wednesday for a baked potato bar with chili, meatloaf, and many toppings and sides. Our director, Gail Voss, called Phil and Madonna Pollreis in Littleton so we could listen and talk to them on the fine sound system that he gave to our center, which is such a blessing. Tila Dunn of Walsh attended to thank our community for our support of the Quilts of Valor program. The quilters do appreciate donations of money or fabric to make more quilts for our worthy veterans. Areta Blooding-Laird and Tila held up the gorgeous quilt that Gloria Peck quilted to honor Areta, who is a Navy veteran. The brunch will be October 7 at 10:00 a.m. and noon lunch will be held October 20. 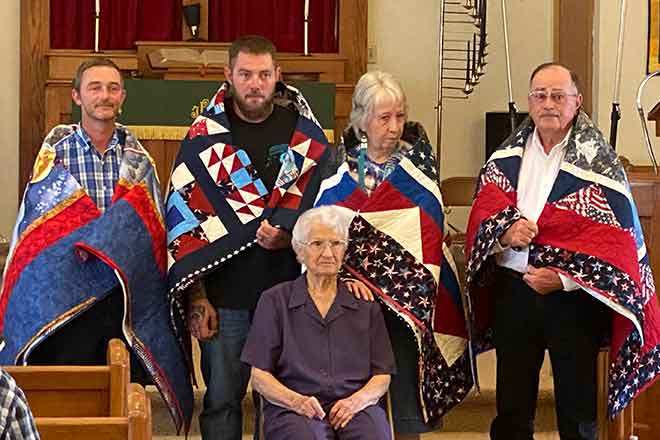 Coach Austin Adamson, son of Darryl and Mandy Adamson of Eads, spoke on the radio from Alamosa Saturday, where his girls' softball team was playing. His brother, Brandon, is a principal and a coach in Lamar also. It is heartwarming to see our former students be successful, especially when they choose to work for the good of youth and families.