Denver 9News political reporter Marshall Zelinger will moderate the debate, which will be live from Richardson Hall Auditorium and accessible to voters through an internet livestream at www.adams.edu/live. 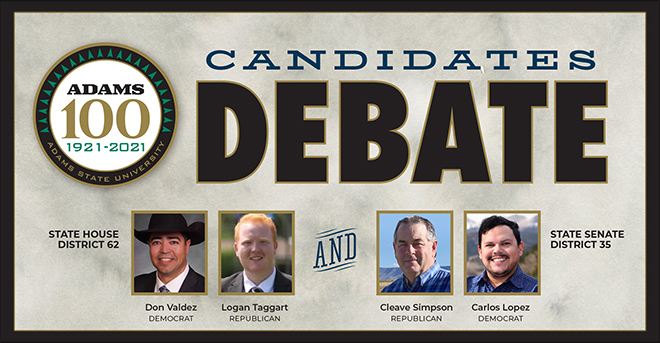 Valdez and Taggart will debate first beginning at 5:15 p.m., followed by the Senate District 35 debate between Lopez and Simpson at 6:30 p.m.

There will be no live audience inside Richardson Hall, only the candidates, the debate moderator, and campaign and University staff as necessary.

"Adams State is proud to host these two debates to help educate voters in these key state races representing southern Colorado," said Adams State President Cheryl D. Lovell. "As a state we are stronger when we all participate in the electorate process, and as the leading rural-serving university in Colorado we believe it's our duty and obligation to help present the issues and bring candidates together to debate the issues."

The debate will be carried live on the web page www.adams.edu/live beginning at 5:15 p.m. September 30. Hosting the debate is an effort to expand Adams State's live event programming and to encourage Coloradans to participate and engage in the voting process.

Topics to be covered include the health of the Rio Grande, higher education and K-12 funding, rural healthcare, and rural market sustainability. Adams State political science students as well as voters in the house district and senate district areas will help determine questions.

"The Adams State University community, like Coloradans across south-central and southern Colorado, anxiously anticipate the 2020 general election in November," said President Lovell "In our efforts to help the region get to know the candidates running for state offices, Adams State is proud to bring this type of high-quality programming live from Richardson Hall."