Much needed rain greened pastures, but also damaged alfalfa in the southern areas of the state, according to the Mountain Region Field Office of the National Agricultural Statistics Service, USDA.

Statewide, weather reports indicate that over the past week isolated areas received more than one inch of rain with most of the state receiving only a trace of rainfall.

In northeastern counties, dry, windy conditions and cooler temperatures were reported. Irrigated crops continued to mature quickly. Reports indicated concern about the condition of non-irrigated crops, particularly millet and sorghum, and the potential risk for crop failure. Producers expect a better yield from the third cutting of alfalfa, compared to the second cutting. Pasture conditions continued to decline, with livestock producers supplementing feed, culling herds, and planning to wean earlier than usual.

Southwestern counties have received much needed rain. However, most of the second cutting of alfalfa was rained on and discolored. Reports indicated barley and potatoes were doing well. While cattle conditions were good, pasture is not in good condition and many livestock producers are seeking alternative pasture since they are short on their grazing leases.

In the San Luis Valley, rainfall has greened up pastures and livestock are generally in good condition. Recent rains also discolored much of the second cutting of alfalfa. In southeastern counties, alfalfa harvest has slowed due to rainfall and reports indicated concern for the quality of the alfalfa due to the rain. Pasture grass is beginning to grow. With recent high humidity, corn and sorghum are doing well. 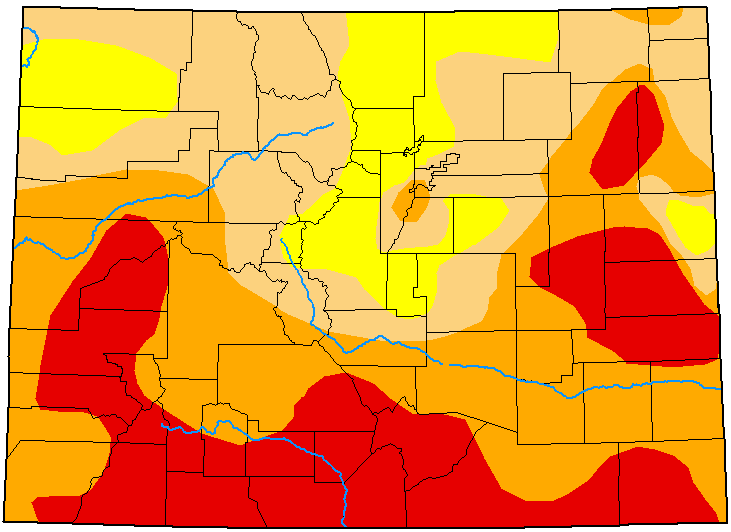