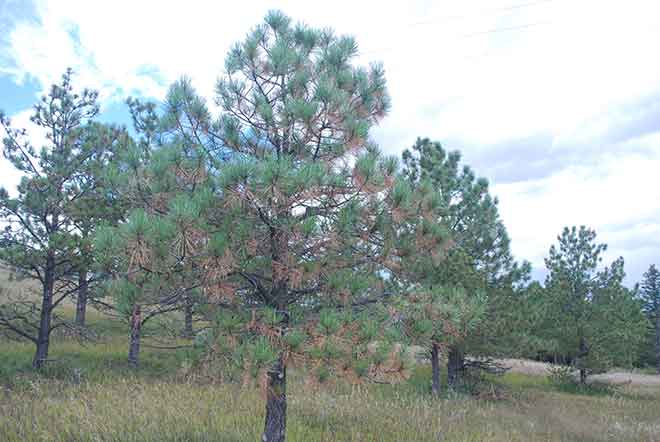 Although thousands of evergreen trees in Colorado's high country, foothills and communities are beginning to display dying yellow or brown needles, most are simply going through a natural shedding process - they are not being damaged by bark beetles or any specific tree insect or disease.

Colorado evergreens shed their older, interior needles as part of an annual growth cycle. Needles on the lower portions of the crown or closest to the trunk are most commonly shed, but trees stressed due to drought or root damage may shed more needles to keep the tree in balance with its root system. Soon-to-be shed needles typically yellow first; then, they turn a reddish-orange or brown color before dropping off. Trees can have varying levels of needle shed, even within the same property or general area. 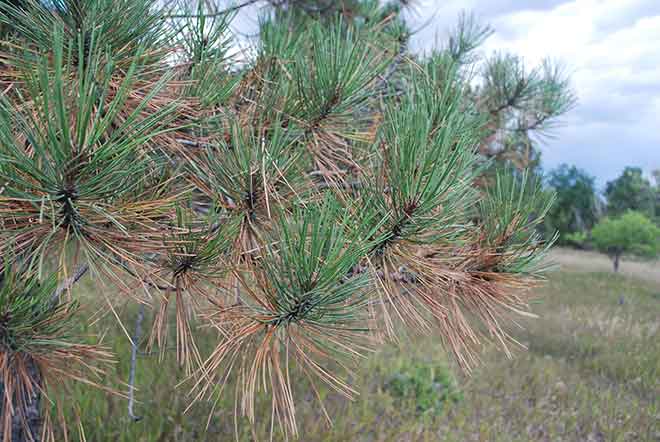 In Colorado, ponderosa and lodgepole pines, as well as some spruce and fir species, are the trees that are most commonly reported to be shedding needles in September and October.

Evergreen trees that shed fall needles have a different appearance than trees infested by bark beetles. The needles on a beetle-infested tree typically change color throughout the entire tree (as opposed to only the older needles in healthy trees), initially starting with an off-shade of green and turning to reddish-orange by the following summer. In addition to changing needle color, bark beetle-infested trees will show other signs of attack, such as popcorn-shaped pitch tubes on the trunk, boring dust resembling fine sawdust collecting in bark crevices and at the base of the tree, and regular woodpecker activity.

This fall needle drop is frequently mislabeled as "needle cast," but the term actually refers to a fungal disease of spruce and fir trees. There is no need to spray or otherwise chemically treat pines and other evergreens exhibiting normal fall needle drop.

Good nutrition can contribute to...