An unusually far-reaching snowstorm for early October will stall, strengthen and evolve into an "all-out blizzard" over the Dakotas and will send a blast of cold air across much of the Plains and Midwest.

Heavy snow has already fallen on the northern Rockies and was progressing southeastward along with a charge of cold air. Snow and slippery travel were also being reported in parts of Washington state, including around Spokane where new daily snowfall record for Oct. 8 was set. Spokane International Airport recorded 3.3 inches of snow Tuesday, shattering the previous record for the day, which was a trace set in 1981.

Following a high in the lower 80s on Wednesday, people in Denver will be in for a shock as temperatures are forecast to be 60 degrees lower with their first accumulating snow of the season by Thursday.

The snow and cold air will continue to advance eastward on Thursday. 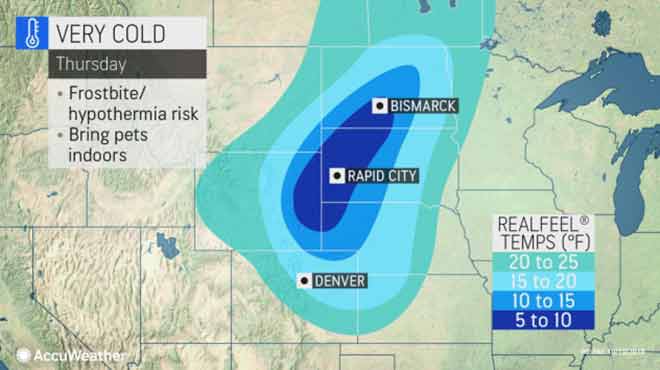 As temperatures plummet and wind and the snow take the heat from paved and concrete surfaces, roads will become slushy and snow covered.

Winds will continue to increase into Friday, and blowing and drifting snow will create blizzard conditions with dangerous travel. Some roads may close.

Winds from the northwest are expected to average 15-30 mph with frequent gusts past 40 mph over the northern and central Plains. An AccuWeather StormMax(tm) for wind gusts of 60 mph is anticipated over the Dakotas.

AccuWeather RealFeel(r) Temperatures will plummet into the single digits and teens Fahrenheit in the snow area.

In addition to slippery travel and locally dangerous conditions in highways through the Rockies, travel along portions of Interstates 29, 80, 90 and 94 will be difficult, dangerous and perhaps in some cases impossible at the height of the storm. 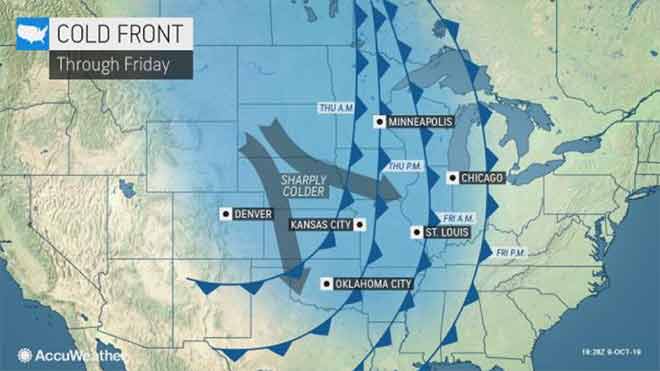 From Thursday night into Friday night, an "all-out blizzard" is anticipated from central and northeastern South Dakota to central and eastern North Dakota, according to AccuWeather chief broadcast meteorologist Bernie Rayno. Unnecessary travel should be avoided in these areas.

A general 6-12 inches is forecast over much of the Dakotas. However, a large swath of 12-24 inches is likely with an AccuWeather Local StormMax(tm) of 30 inches likely from north-central South Dakota to central and northeastern North Dakota.

Cities that could end up with 2 feet of snow include Bismarck, Jamestown and Devils Lake, North Dakota, as well as Mobridge, South Dakota, and Winnipeg, Manitoba. 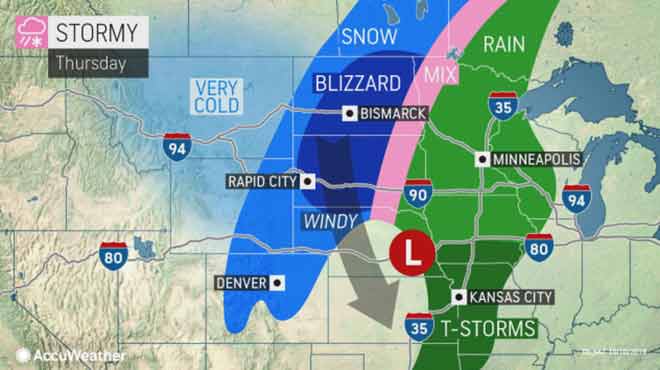 Snowfall and storms of this magnitude can occur in October, but typically they do so on a much smaller scale and are much more common during the late winter and early spring.

Gusty winds from the powerful storm will be far-reaching and push chilly air out well to the south and east over the middle Mississippi Valley, Great Lakes and Ohio Valley this weekend.

For example, in Minneapolis, temperatures that reached the lower 70s on Wednesday will be replaced with temperatures hovering within a few degrees of 40 and RealFeel(r) Temperatures in the twenties by Friday.

Around Chicago, temperatures in the 70s on Thursday will drop sharply and only reach a high near 50 by Saturday. Gusty winds may create RealFeel(r) Temperatures in the 30s and even 20s at times over the weekend. 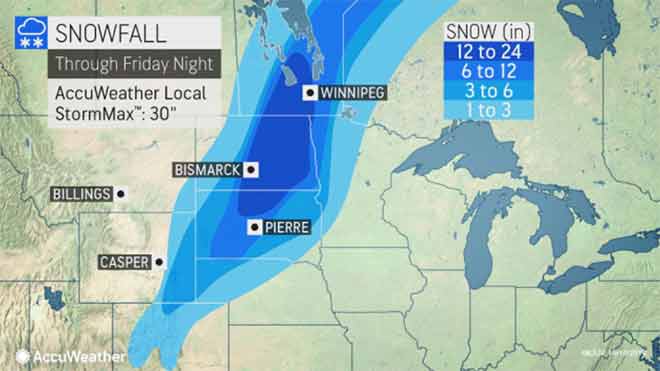 Farther south, the warm to chilly exchange will be less dramatic but still noticeable. RealFeel(r) Temperatures in the 70s and 80s will be replaced with the 40s and 50s for a time across the southern Plains to the Ohio Valley.

Interestingly, around the same time in 1991, the "Perfect Storm" was in the making over the western Atlantic Ocean. There are some similarities to the pattern this week with a smaller storm taking shape and stalling just off the mid-Atlantic and New England coasts.