While college basketball fans sit glued to their televisions each March, Colorado Parks and Wildlife plays its own version of "March Madness."

Without fanfare, betting brackets or "One Shining Moment" tributes, CPW biologists and volunteers head out at dawn, usually in freezing temperatures, to Front Range reservoirs and spend a month capturing thousands of Walle.ye and spawning them in a quest for Colorado anglers' precious aquatic prize.

- a slam dunk for anglers statewide. 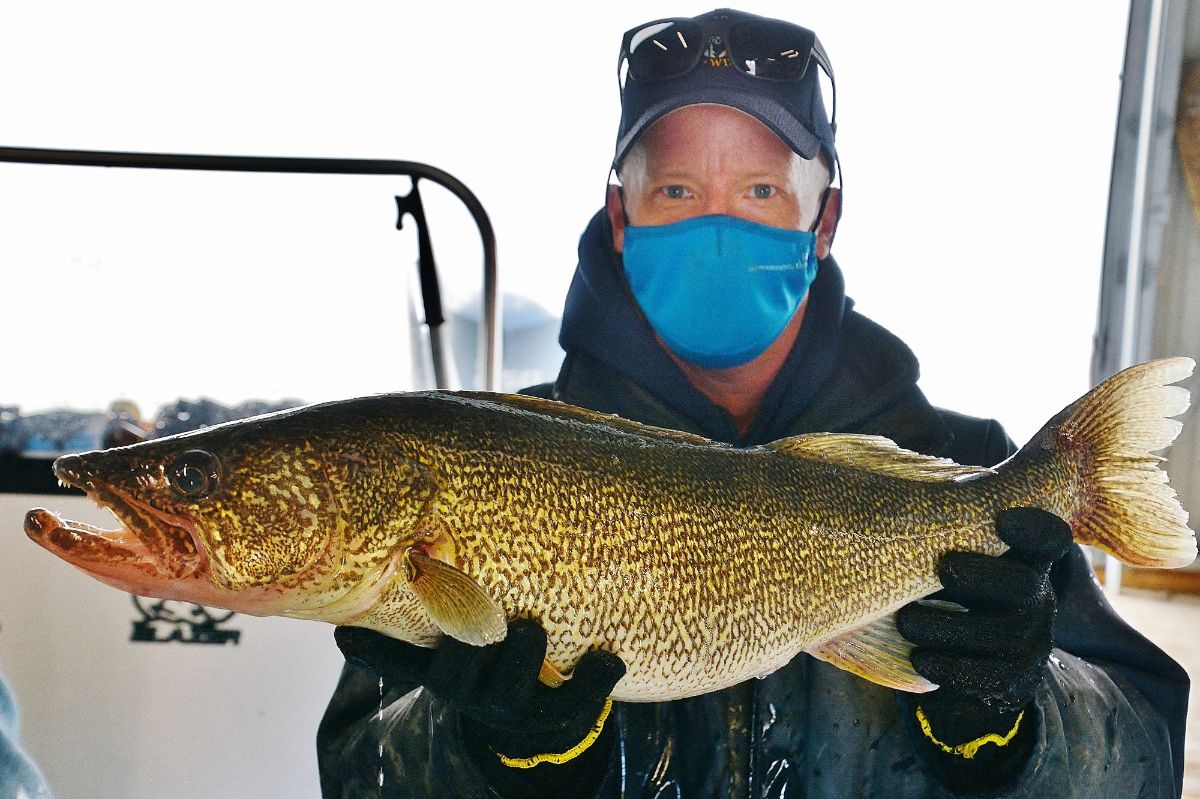 It's particularly great news after last year's disappointing, pandemic-shortened spawn produced only a tiny fraction of the usual haul.

"Honestly, it's hard to believe what our team of aquatic biologists, other CPW staff, and three volunteers were able to accomplish this year at Lake Pueblo State Park," said Josh Nehring, senior aquatic biologist for CPW's Southeast Region. "We weren't sure what to expect. But we never expected to catch so many fish and produce so many eggs, so fast.

"It's remarkable. And anglers ought to be thrilled because it's going to mean great fishing in the coming years in Colorado."

There, three teams of aquatic biologists deploy at dawn each day for most of the month, working seven days a week in sun, rain and often snow, to gill-net hundreds of Walleye each day.

They strip the popular gamefish, one slippery Walleye after another, of their milt and roe (sperm and eggs) as the fish wriggle furiously in the biologists' cold, wet hands.

The eggs are fertilized in a boathouse at Lake Pueblo, or on a floating barge at Cherry Creek and Chatfield. Then the fertilized eggs - often millions a day - are sent to CPW hatcheries where they are hatched and nurtured until the fry and fingerlings are ready to be stocked in waters across Colorado.

Typically, the grueling routine is repeated daily until they've produced about 120 million eggs. Only when the goal is reached can the madness end.

Why does CPW go to all the effort?

Because anglers love Walleye for the valiant fight they put up on the end of a line and for the way they taste at the end of a fork. 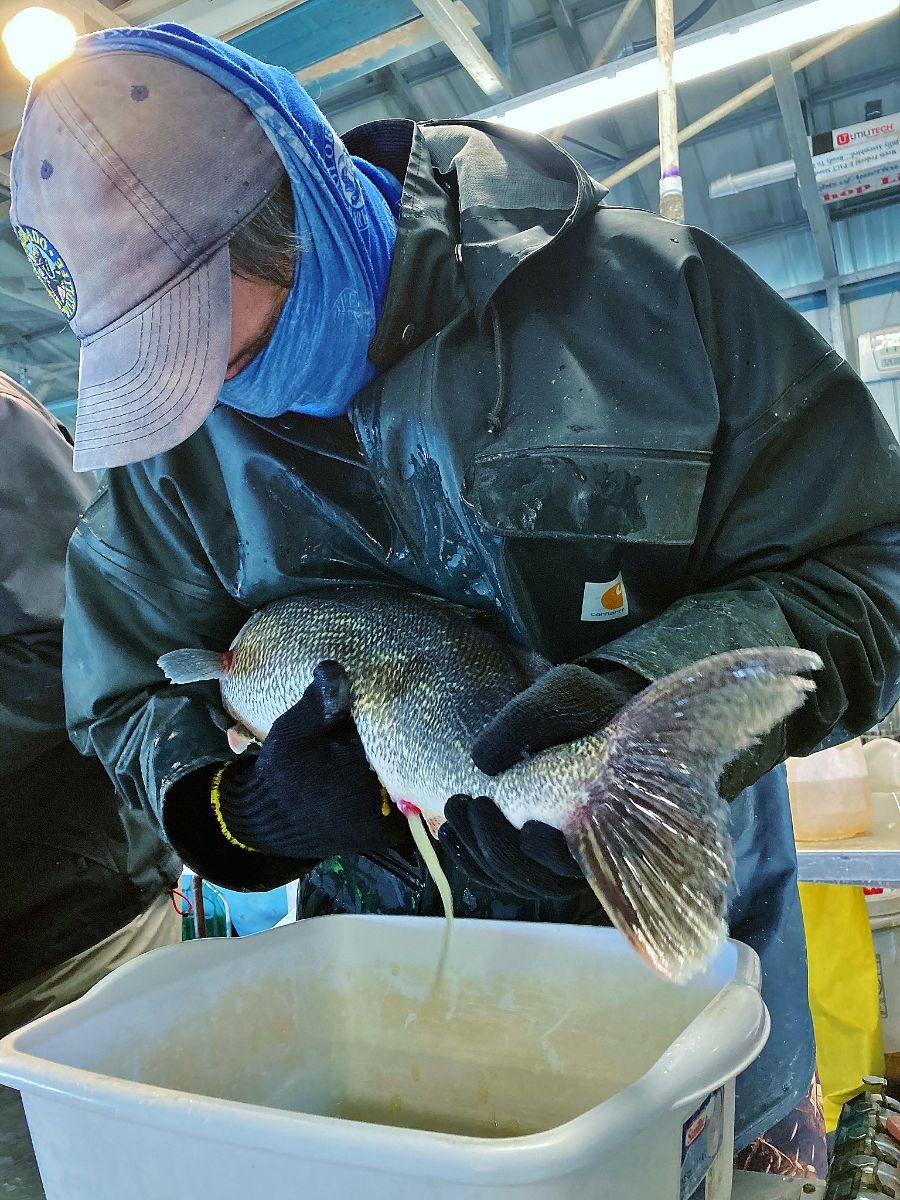 The Walleye eggs also are valuable as CPW's hatchery staff trade them to other states in exchange for desirable gamefish otherwise unavailable in Colorado.

The annual effort has gone on since 1988 at Lake Pueblo and, in normal years, involves a small army of CPW aquatic biologists, other staff and volunteers who typically spend hours each day alongside the biologists untangling dozens of nets - each longer than a football field - deployed each afternoon and left overnight in the lakes for the next morning's catch.

Then, a year ago, came COVID-19 forcing a sudden stop to the spawning operation. One day into the 2020 Walleye spawn, CPW aborted operations as the worldwide pandemic reached Colorado.

Anglers feared their prized catch would quickly disappear without the human-assisted spawning operation. Sure, the Walleye in the three lakes would still spawn without human interference. But the survival rate of Walleye eggs spawned naturally in the lake can be as low as 10 percent while eggs gathered and fertilized by CPW aquatic biologists is typically as high as 80 percent.

"That's why CPW and its predecessor agencies began spawning fish several decades ago," Nehring said. "And the modern operation has helped boost Walleye populations and ensures great fishing for anglers."

So there was great pressure on CPW's Team Walleye as it began operations this year. That pressure was made worse by the decision to limit participation to just a core group of biologists and only three longtime volunteers: Russ Dewey, Mark Elkins and Dan Frankowski.

Those three volunteers each have decades of experience - Frankowski first volunteered at the Lake Pueblo boathouse in 1990 - and all were vaccinated against the COVID-19 virus. And everyone wore masks for protection. In a further safety precaution, the net reefing operation was moved out of the cramped boathouse and into an open-air parking lot.

It was a stark contrast to past years when a large support staff and larger team of volunteers arrived each morning before dawn to expedite the spawn and to let the biologists concentrate on catching and squeezing the fish.

Perhaps the volunteers' biggest contribution is the chore of "reefing" the nets. 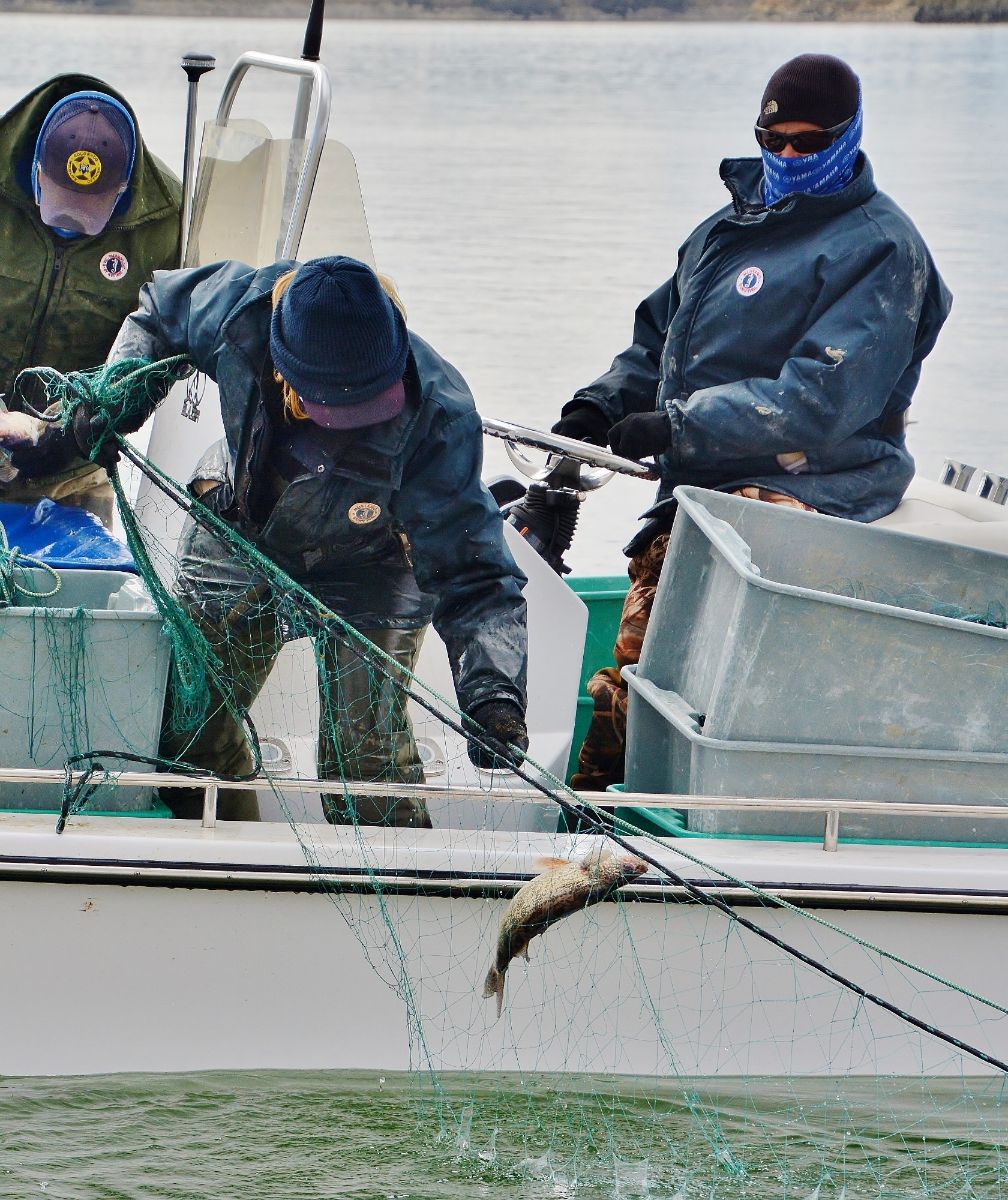 They drag 32 heavy tubs, each holding a 400-foot-long gill net and start hours of reefing -- the process of untangling the massive nets.

The work starts by taking one end of the long net and tossing it over a large plastic pipe hanging from the rafters of the boathouse.

Then they stand and pull the 400-feet of net over the tube, inch by inch, removing tree branches, debris and even old fishing lures, as they slowly and carefully place it into a new tub. Along the way they also make repairs to netting ripped by the debris.

This year, however, the 14-member Team Walleye was responsible for most of the prep work, rinse stations, all the sorting and counting.

And with only three volunteers, the CPW Team Walleye biologists spent what would normally be their lunch hours standing in the parking lot reefing nets so they could take them back out on the lake to be set for the next morning.

But as bad as 2020 was for Team Walleye, the 2021 season was great. Nehring said the overall Walleye catch at Lake Pueblo was among the best in decades.

It took only a few days for the Pueblo team to blow past its goal of 40 million eggs. The Walleye, and the eggs, just kept piling up.

This turned out to be especially important because CPW had decided in advance not to spawn at Chatfield this year and the effort at Cherry Creek was partially held back due to COVID-19 concerns.

"It was an absolutely monster year," Tucker said. "We've never gotten so many fish, day after day. It was great to be back on the water. And it's great to know our anglers are going to have a lot of success catching fish this summer."

The number of fish netted each day kept growing until Nehring, Tucker and the team spawned 156 female Walleyes on March 26. They were so surprised they wrote the number on cardboard and placed it in the rafters of the boathouse, noting it exceeded the previous record of 130 female Walleye spawned in one day in 2019.

In all, Team Walleye beat the 2019 record for daily female spawns three times in 2021.

The box score showed that in a quick 16 days, they had produced 90 million eggs from Lake Pueblo -- by far the majority of CPW's 2021 statewide total of 131 million eggs.

The team also ran up the score by exceeding 9 million eggs produced on 3 days. Their best was 9.8 million March 29.

They further stuffed the stat sheet by producing 6 million sterile "Triploids." The Triploid is a sterile Walleye hybrid. CPW aquatic biologists like Triploids because they can be stocked in West Slope waters without fear of reproducing and competing with native fish.

Another benefit of the record Walleye spawn was the production of 32.4 million Saugeye. It's a hybrid made from sauger milt from Nebraska and Colorado Walleye eggs. The Saugeye loves shallow water making it a favorite among shore anglers.

In the college basketball March Madness, colorful confetti fell on the winners as they cut down the nets at the end of the tournament.

Only a light snow fell on Team Walleye as the biologists folded up the last nets on March 31, ending CPW's version of March Madness.