The Addams Family have been a part of American culture since their one-panel cartoons appeared in The New Yorker in 1938. Their history includes a TV series in the 60's (that of course gave us that snap-happy theme song), two live-action films in the 90's, countless animated adaptations, and a dearly-departed Broadway musical, important to me because actress Rachel Potter, who played Wednesday in the show, let me buy her a drink in a bar during a Tony Awards party. The new animated film has to live up to a rich legacy, and although it will probably make a decent amount of money between now and Halloween, it is a major creative letdown. 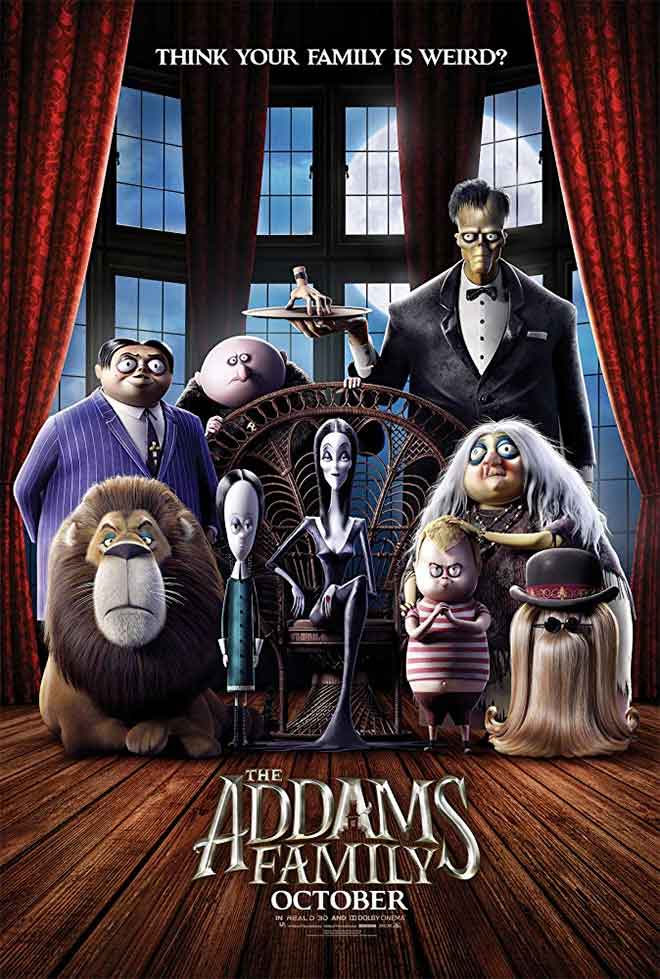 All the classic characters are here: twisted traditionalist father Gomez (Oscar Isaac), macabre mother Morticia (Charlize Theron), moody-even-for-a-teenager daughter Wednesday (Chloe Grace Moretz), brilliant son Pugsley (Finn Wolfhard), weirdo Uncle Fester (Nick Kroll), outspoken Grandmama (Bette Midler), lurch-y butler Lurch (Conrad Vernon), walking pile of hair Cousin Itt (Snoop Dogg, apparently, though the character only communicates in squeaks), and disembodied hand Thing (nobody, probably because he has no body). The movie also throws in a bunch of other odd relatives, teasing that we'll get to know their stories later, perhaps hinting at an animated series to come. If that series is anything like this movie, I'll be content to let it wither and die, appropriate given the subject matter.

There are scraps of plot about Gomez and Morticia fleeing a world that rejects them, the kids growing up in isolation, Wednesday wanting to go to public school just to annoy her parents, Pugsley training for a reunion-worthy swordplay ritual that he hates, and a neighbor (Allison Janney) who wants to destroy the family's converted-asylum home because it's an eyesore and has no business overlooking her town with the way-too-on-the-nose name of Assimilation. None of it really matters, the movie knows you're just here to see the Addams Family be the Addams Family. Yeah, if nothing else, everybody pretty much stays in character.

There's no getting around it, the Addams Family likes some unusual things. Their house is decorated with cobwebs and dust. Their favorite pastimes involve torturing each other with medieval implements. They keep bats, a hungry lion, and a sentient tree as pets. As a matter of fact, they seem to like everything bad. If they wish to bid you welcome, they'll say "It's horrible to see you." That type of wordplay gets old in this movie before Wednesday and Pugsley are even born.

The family's redeeming quality is that they're really sweet and loving in spite of their unorthodox ways. The parents want what's best for the kids, even if that means unwisely shunning social interaction. They at least make an effort to be nice to their neighbors, which naturally is more than can be said of the insecure neighbors themselves. And there is much emphasis on defending the family from the many, many people who wish to do it harm. The shared value seems to be "Nobody hurts my family... but me."

But having watched "The Addams Family" in various iterations, I already knew all of this, and the movie adds little to the family dynamic. Maybe a few jokes about smartphones and home renovation shows, but that's it. Speaking of jokes, a lot of the humor in this movie falls flat. I was able to guess the vast majority of punchlines before they were uttered, and the physical humor is equally uninspired, not to mention some annoying smutty jokes snuck in to theoretically entertain understandably bored adults. I hate to disparage a property I love as much as "The Addams Family," but it's being poorly handled here. I wasn't the biggest fan of "Abominable" a few weeks back, but it's a much better choice for family viewing than this unwelcome reboot.

"The Addams Family" is rated PG for macabre and suggestive humor, and some action. Its running time is only 87 minutes, and that's the best thing about it.