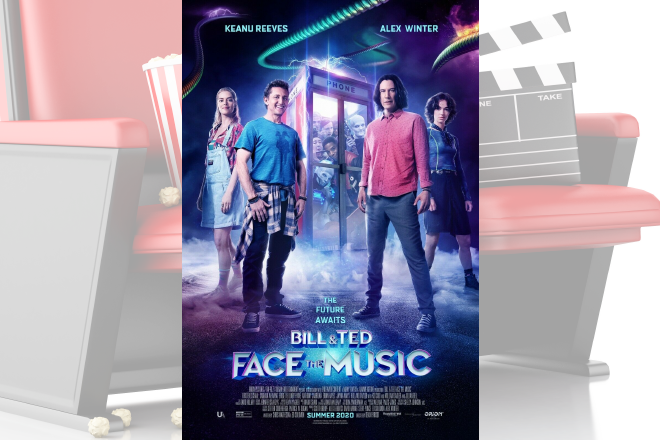 NOTE: Starting this week, the column is back to On Demand releases for the foreseeable future.

I watched the first two "Bill & Ted" movies to prepare for new installment "Face the Music," and I have to say, they didn't do much for me. I didn't think they were painful or anything, but having grown up with similar dimwitted duos (Wayne and Garth, Beavis and Butthead, etc.), I didn't think the title pair brought much to the table. Their manner of speaking, which is basically slacker talk with one out of every ten words inexplicably higher than their apparent vocabulary level, gets old fast and the time travel jokes never rise above "lazy." I liked that George Carlin was in the movies, but that's mostly because his appearances triggered happy memories of his standup. The point is that I'm maybe not the target audience for "Face the Music," since I wasn't coming in as a fan.

Alex Winter and Keanu Reeves are back as Bill S. Preston, Esq. and "Ted" Theodore Logan, respectively. Although we've known since "Bill & Ted's Excellent Adventure" back in 1989 that the duo's music and philosophy ("Be excellent to each other") will one day unite the world and usher in centuries of greatness, things aren't going so excellently lately. Their band Wyld Stallyns is on the rocks following the tumultuous departure of Death (William Sadler) and they can't seem to get the sound or song that will take them back to their previous height. Their marriages to princesses Joanna (Jayma Mays) and Elizabeth (Erinn Hayes) are souring, though they have the love and admiration of their daughters Thea (Samara Weaving) and Billie (Brigette Lundy-Paine). Also, there's the small matter of the universe collapsing on itself because they can't get their act together.

Fortunately, they have help from time traveler from the future Kelly (Kristen Schaal), the daughter of Carlin's character from the original. She says that they have forty-seven minutes (in real time) to write the song that will unite the world or the whole universe dies. They can use a time machine however they see fit to accomplish this goal. They decide to go to various intervals in the future to get the song from their future selves, who have already written it. But taking this shortcut just makes their lives in the future miserable. Though have to I wonder how there's a future at all unless they succeed. Ugh, I saw this movie only a few days after "Tenet," and I was in no mood to sort out another complex system of time travel.

The adventure includes a side-trip for the daughters to round up musical talent for the big performance that evening, which is basically just a rehash of the first movie with less fit actors. Weaving and Lundy-Paine are likeable enough, but they cannot make Bill & Ted-speak sound natural to save their lives. There's also a subplot about Kelly's mother (Holland Taylor) sending a robot assassin (Anthony Carrigan) into the past to kill Bill and Ted. Somebody behind the scenes must think Carrigan is hilarious, because he's constantly allowed awkward riffs that kill the movie's already-shaky momentum.

Very little about "Bill & Ted Face the Music" worked for me. The new characters are either unfunny (the daughters), unnecessary (Kelly and her mother), or both (the robot). I suppose it's a trip to see Winter and Reeves back in these roles, and to be fair they haven't lost an ounce of sincerity or chemistry in thirty years, and I'm sure it means much more to people who were fans of them thirty years ago than it does to me, but I find that a little of Bill & Ted goes a long way. This movie is too harmless to strongly dislike, but if you aren't already fans of these characters, you probably won't be won over by "Face the Music."

"Bill & Ted Face the Music" is available On Demand through online streaming services and likely through your local cable provider. The film is rated PG-13 for some language. Its running time is 91 minutes.

What is involuntary manslaughter? A law...

Why gas stoves matter to the climate – and...