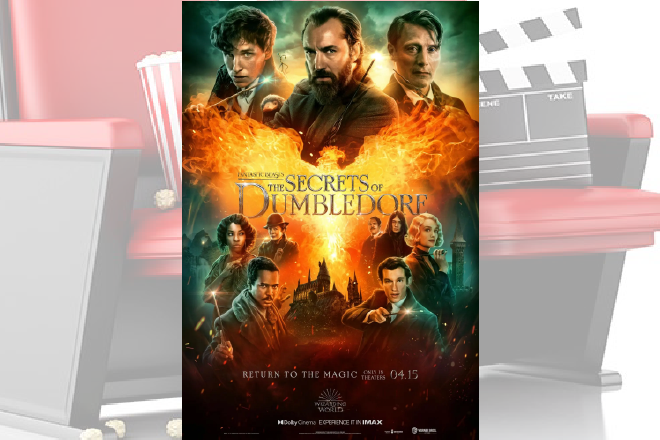 Unlike the 8-movie "Harry Potter" series, the "Fantastic Beasts" sector of J.K. Rowling's Wizarding World has never been able to quite get off the ground. Maybe it's because audiences find it hard to get behind skittish protagonist Newt Scamander (Eddie Redmayne) as a hero. Maybe it's because of all the bad press surrounding actors Ezra Miller and Johnny Depp (here replaced by Mads Mikkelsen) and even Rowling herself. But I think the real reason is that audiences see "Fantastic Beasts" as a transparent cash-grab; Rowling was under pressure to add to the Wizarding World, so she came up with this 1920's prequel series strictly for the sake of getting in more movies. There will always be viewers that want to see what happens next in the Wizarding World, but audiences both dedicated and casual can sense a lack of passion.

The new movie sees evil wizard Gellert Grindelwald (Mikkelsen) try to steal the election to become President of the International Confederation of Wizards so he can wage a war against non-magical Muggles. It's up to former lover (now officially acknowledged as such) Albus Dumbledore (Jude Law) to stop him. But Albus can't act against Grindelwald personally, lest he break a magical pact he made when he was younger. He can, however, coach a team led by "magizoologist" (magic animal expert) Scamander, himself a valuable asset since a key part of Grindelwald's plan is to exploit a Fantastic Beast called a Qilin that can see into people's souls and greatly influence the election.

Grindelwald has his own team that consists of the powerful-but-manipulable Creedence Barebone (Miller), mind reader and former lover of Jacob's Queenie Goldstein (Alison Sudol), and... a bunch of henchmen that don't matter. Honestly, it's a wonder I care about as many characters as much as I do, because these movies are overly-ambitious with their casts, and they keep introducing new characters without properly developing major ones like Newt. That said, I liked the new character of Professor Hicks, who nicely fills this movie's need for a heroic female presence following Queenie's heel turn in the last movie and sister Tina (Katherine Waterston)'s conspicuous absence from most of this one. People are sure to say that the patch-job of Mads Mikkelson is the shrewdest casting decision in the movie, but I say it's Jessica Williams.

The best thing I can say for "Fantastic Beasts: The Secrets of Dumbledore" is that it's mostly a pleasant movie. The Qilin is adorable and Newt makes allies out of supposedly ugly creatures. Grindelwald spends much of the movie in the public eye, so after some grim early actions he can't afford to be the violent psycho he was in the last installment. The climax takes place in daylight in a tranquil setting. The finale ends things on an upbeat note. It's so nice, in fact, that I couldn't help but wonder if maybe Warner Bros. is planning to scrap the rest of the series and end things here. Nah, evil has to be punished more in future installments. Still, it's hard to shake the feeling that the magic is long gone from the Wizarding World.

"Fantastic Beasts: The Secrets of Dumbledore" is rated PG-13 for some fantasy action/violence. Its running time is 142 minutes.