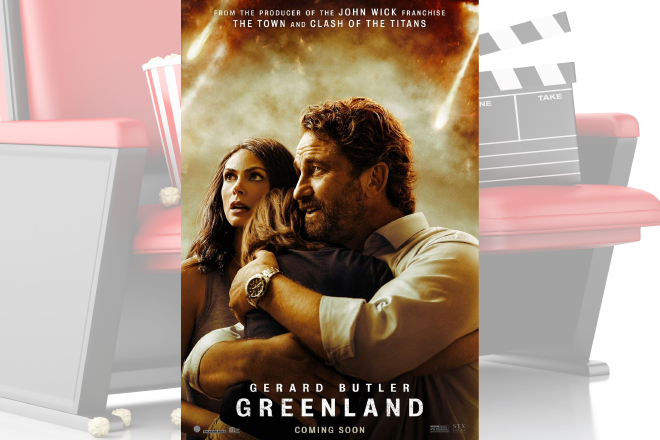 "Greenland" was supposed to get a big theatrical release as recently as August. I remember seeing trailers for the film before "Unhinged," the first movie I'd seen in theaters since March. Come to think of it, it may have been the first theatrical trailer I'd seen in months. I remember robotically thinking, "I'll see that. I'll see anything in a theater." But this being 2020, the film was pushed back and pushed back until finally it was released On Demand. Several movies this year have been denied theatrical releases and dumped On Demand, and most of them turned out to be undeserving of theatrical releases in the first place (looking at you, "Antebellum"), but I think the studio got it wrong with this one. This movie's high stakes and visual spectacle make it appropriate for the big screen, and it could have held its own at the box office on a weekend without strong competition. Maybe even with strong competition.

Gerard Butler stars as John Garrity, a structural engineer from Atlanta. He, his wife Allison (Morena Baccarin), and his son Nathan (Roger Dale Floyd) are selected to fly to Greenland to live in an elaborate survival bunker in the highly likely event that an incoming comet proves apocalyptic. Pieces of the comet are already leaving devastation in their wake, from fiery skies to miles-long shockwaves to craters where people used to be. And that's not counting the danger from other humans. Stores are being looted, friends and neighbors are turning on each other, and everybody wants to be on the very few planes that can get to the bunker. The family has less than 48 hours to make it to Greenland, and they're going to need every second of it.

Tropes of the disaster movie formula are instantly recognizable. The parents are estranged but will reconnect through this shared peril. Nathan has diabetes, so a race for insulin will require detours at inconvenient times. Military personnel will be well-meaning but unwilling to deviate from orders for the benefit of our heroes. And there will be traffic jams that force our heroes to abandon their vehicles and pursue safety on foot. Seriously, there are a lot of traffic jams. The middle of the movie could be described as the characters going from one traffic jam to another.

But the movie is fine with understandable obstacles. The actors, especially Baccarin, a good at selling tension and desperation during scenes where they have to deal with separation and danger and a general lack of sympathy toward their urgency. It's when the movie creates unusual obstacles that it gets a little goofy. Somebody really wanted a far-fetched Gerard Butler hammerfight as an action beat, and a kidnapping subplot uproots the groundedness of the movie until that point (although Nathan managed to elicit a big cheer out of me at a key moment).

Even with the occasional misstep, "Greenland" features relatable characters reacting intensely, yet understandably, to an extraordinary situation. It is a worthy entry into the pantheon of disaster movies, and I'll go so far as to say that it's better than both "Deep Impact" and "Armageddon," the dueling comet movies from 1998. The large-scale destruction scenes aren't exactly convincing enough to be heartbreaking, but you'll get the point. The emphasis is more on human drama anyway.

This movie should have been released in theaters. The only halfway decent reason I can see for deciding otherwise is that maybe the studio thought it would be too depressing. With daily victims of COVID-19 numbering in the thousands, maybe they decided it was a bad idea to release a movie where the deaths number in the millions. I would have recommended another pushback of its theatrical release instead of an On Demand blowoff, and it saddens me that the studio has botched its handling of a potential blockbuster.

"Greenland" is available On Demand through online streaming services and likely through your local cable provider. The film is rated PG-13 for intense sequences of disaster action, some violence, bloody images and brief strong language. Its running time is 119 minutes.

Atmos Energy - Notice of Change in...