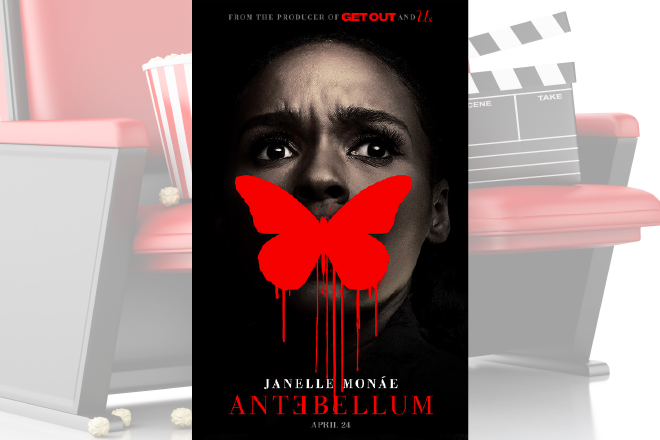 Wannabe theatrical releases that go straight to On Demand in this era fall into one of three categories. There are movies that try to make a lateral move - they would have made good money in theaters, and hopefully they'll make good money at home, too. "Trolls World Tour" and "Scoob!" are like this. Then there are movies that try to become minor hits with strategic On Demand releasing. "The High Note" and "The Tax Collector" probably wouldn't have been able to cut it in theaters, but they were able to take advantage of a reshuffling of the deck. Then there are movies that go straight to On Demand because the studios realize that they had straight-to-On-Demand-quality movies all along. Examples of these include "Capone" and today's selection, "Antebellum." Had this film's release not relegated it to home viewing, it might have garnered a reputation as one of the worst theatrical releases of the year.

The first 39 minutes of this movie are just slaves being mistreated at a plantation. An escapee is shot, and Eden (Janelle Monae) is violently branded for her role in the escape attempt. Everyone else is forced to work long hours picking cotton in a field, only for the cotton to be thrown on a fire. The one-dimensional villains revel in abusing the slaves, and so does the movie. But there has to be more to the movie than that, right? The advertising promised a horror movie, and while much of the imagery thus far can certainly be described as "horrific," it doesn't really fit into the horror genre.

Following a traumatic experience, Eden goes to sleep, and when she wakes up, she's living an idyllic life in a version of the world we recognize. Her name is Veronica, she has a loving husband and daughter, and she's a bestselling author with a lucrative speaking tour. Although the "best life" business isn't as painful to watch as the slavery scenes (an embarrassingly rude best friend played by Gabourey Sidibe notwithstanding), this too gets old quickly as we wait for something to connect the two worlds. Is it reincarnation? Parallel universes? Dreams? Actually, it's something I guessed pretty early. Something about a tent seemed "off," and a certain mild slur seemed out of place.

The appeal of the entire movie lies in a twist, as if the writers thought of it and wrote the movie around it. Actually, I'm sure that's what happened. In short, the problem with the twist is that it is supposed to be believable and it isn't. These characters could never pull it off even if they were smarter, and as it is, they're morons. There's maybe a kernel of an interesting idea here, but the movie bungles it in many ways at once, including taking itself too seriously and focusing on predictable white-on-black violence rather than the black characters coming to terms with their lives as slaves.

Perhaps I'm being too hard on "Antebellum" when I say it would have made one of the worst theatrical releases of the year. There are a few positives about it. The camera work is unexpectedly competent (especially in a long tracking shot at the beginning), the costumes are beautiful (though suspiciously clean given the setting), and Monae can cry real tears. But people are going to come away from the film talking about the twist, and it is one of the worst I've ever seen. It's not like the two acts that preceded it were particularly compelling, but the film takes a turn for the ridiculous with a disappointing shortage of appropriate ridiculousness. Ignore this movie from the comfort of your home.

"Antebellum" is available On Demand with online streaming services, and likely through your local cable provider. The film is rated R for disturbing violent content, language, and sexual references. Its running time is 105 minutes.