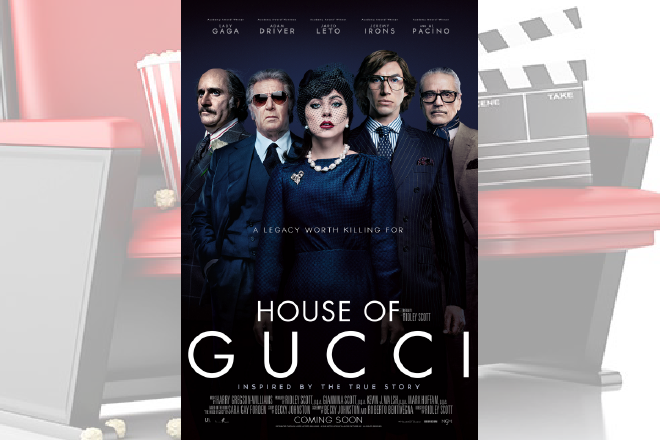 Ridley Scott's "House of Gucci" had an unimpressive 3rd place box office debut on what was frankly an unimpressive Thanksgiving weekend. A week has passed, I've already reviewed "Encanto" at #1 and "Ghostbusters: Afterlife" at #2, and no studio wants to open anything new in the notoriously abysmal first weekend in December. So, the still-#3 "House of Gucci" is up for review. Is it as unimpressive as its numbers? In a way, it is. The film is nearly three hours long and didn't knock my socks off, so disappointment is bound to play a role in my opinion. But at the same time, I can't say that it's some sort of spectacular flop, or even a flop at all, really.

Lady Gaga stars as Patrizia Reggiani, heiress to a pathetic Italian trucking empire who yearns for something more. She finds that "more" in the form of Maurizio Gucci (Adam Driver), heir to the sprawling fashion empire. Aspiring lawyer Maurizio has no desire to go into the family business, and in fact he is happy to forfeit his inheritance after his father Rudolfo (Jeremy Irons) disapproves of Patrizia and makes him choose between love and money. The couple is poor-but-happy, with Maurizio going to work for Patrizia's father and sneaking in romantic rendezvous in a trailer. One romantic scene could have cut away after some smooching, but it stays with the two... longer than necessary.

Eventually, through either genuine affection or playing a long con, Patrizia and Maurizio make nice with Rudolfo and are accepted into the Gucci empire. At the top is Maurizio's uncle Aldo, who welcomes Maurizio into the company with open arms, having found a way to keep the brand in the family without having to hand it over to his incompetent son Paolo (Jared Leto). But where Maurizio sees loving family members, Patrizia sees obstacles to taking over Gucci for herself. She's destined for greatness, her psychic Pina (Salma Hayek) tells her so. It's just a matter of removing Aldo from power, getting Paolo to sell his shares of the company, and taking care of Maurizio. The progression of the marriage will determine exactly what it means to "take care of" Maurizio.

Given all the ambition and betrayal (not to mention crime), it's hard not to see "House of Gucci" as a sort of "Godfather" movie. Veteran Pacino is like Michael Corleone in Part III - wizened and prominent, but also frail and losing his grip on power. Driver is like Michael in Part I - smart and wanting to follow his own path, but ultimately sucked into the family business. And Leto, in a comparison everyone is rightfully making, is Fredo - desperate to prove his worth, yet so disastrous that he can only dig himself deeper at every opportunity. Also, he's balding. Granted, so was the real Paolo Gucci, but you can't tell me there isn't at least a little bit of John Cazale in that look.

"House of Gucci" makes some questionable decisions, like the aforementioned sex scene, giving Gaga and Leto a lot of leeway with their Italian accents, and skipping over major chunks of the family's chronology. But it's a fairly investing story. I was reclining in my theater seat and never once did I feel the need to bang my head against the upright one next to me. And of course, there are lavish costumes - even the eyesores that Paolo designs are clearly the result of painstaking effort. Between this, "Cruella," "Spencer," and next week's "West Side Story," this will be a good year for the Best Costume Design category at the Oscars. As for the movie as a whole, I'll give it a mild recommendation.

"House of Gucci" is rated R for language, some sexual content, and brief nudity and violence. Its running time is 158 minutes.