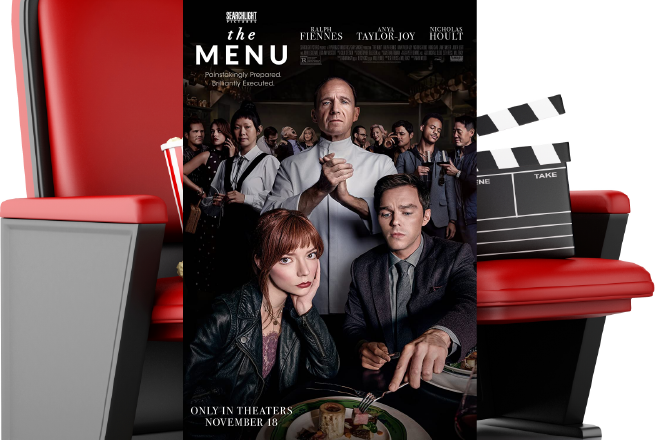 Like the cozy restaurant setting of "The Menu," the theater at my screening of the film this past Friday was sparsely populated. But though the attendance was small in number, there was an unusual sense of kinship in the air. Laughs and groans could be attributed to individual audience members, as well as occasional biting comments (including one of my own, after the movie), and I think we all got a sense of what made one another tick. One thing was for certain: like the characters in the movie, we were all in this intense experience together.

The film follows audience surrogate Margot (Anya Taylor-Joy) as she journeys with her date Tyler (Nicholas Hoult) to a private island that boasts the upscale restaurant Hawthorne. Other diners include a food critic (Janet McTeer), a movie star (John Leguizamo), and other affluent types. The group is greeted by no-nonsense maitre d' Elsa (Hong Chau), who leads them into the dining room, where they meet world-renowned chef Julian Slowik (Ralph Fiennes). Slowik will be in charge of everything this evening, from the food to the entertainment. Both may be suited more to his tastes then the guests'.

Opinions are mixed on a first course that includes a rock and a second course of absent bread. Everybody is uncomfortable with a third course of incriminating tortillas and a story of violence from Slowik's past. The real game-changer comes with the fourth course, which includes a demonstration of violence rather than a story. Slowik's intentions soon become clear: he and the staff of Hawthorne are going to kill everyone, including themselves and all the customers. But first, he's going to break his elitist guests' spirits, "play with his food" as it were, though I will shoot down a popular theory and say that his plan does not involve cannibalism.

Simply put, Julian Slowik is the most memorable movie villain of the year - maybe of the last several years. Fiennes imbues the character with menace, wit, humor, and most of all, charisma. He has an entire kitchen staff under his thumb, and seemingly an entire restaurant full of victims as well. Nobody besides Margot makes a whole-hearted attempt to escape. Nobody even needs to be tied down. Heck, nobody even complains when they're billed before dessert. It could be argued that the patrons know they're no match for the large henchmen stationed at the exits, or that they realize that they deserve what they're getting, but I think it has more to do with them all wondering with morbid curiosity what's coming next from Slowik's kitchen of surprises. That's why the rushed ending was such a disappointment for me. I was hoping Slowik's plan for the characters' fates would be a little more... individually catered.

While Fiennes does give the standout performance in "The Menu," I don't want to short-change Taylor-Joy and Hoult. Margot doesn't fit in with the crazed staff or the snooty guests and Slowik's one imperfection is that he himself doesn't know what to do with this fellow member of the service industry. As for Tyler, he's more excited about being allowed to dine under Slowik's roof than with the beautiful woman sitting across from him. In a movie where half the characters are trying to commit murder, he's somehow the most detestable for his simple condescension. The characters' eccentricities, mind games, and dark humor all come together to make "The Menu" one of the best films of the year. Not bad for a movie whose entire point is that cheeseburgers are a joy and an honor to serve.

"The Menu" is rated R for strong/disturbing violent content, language throughout and some sexual references. Its running time is 107 minutes.